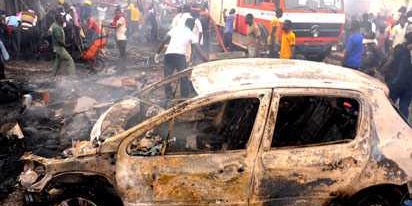 in last Tuesday’s twin bomb blast at the terminus area of Jos metropolis in Plateau State.

The Eze Igbo II of Jos, Prof. Joseph Obilom and the Igbo Executive Council in Jos made this known in Jos, yesterday.
They said the 36 bodies had been identified just as many others were still missing and frowned at the secret mass burial for the decomposing bodies carried by the Plateau State government last Friday.

According to them, it was a taboo to bury an Igbo in mass graves or even outside their ancestral homes.
”We were not consulted when the arrangement for the mass burial was being made,” they further said.

Speaking in an interview with newsmen in Jos, the traditional ruler said his community members sent to locate the bodies were not allowed access to the bodies on Wednesday and at the time of the carrying out the exercise, the Igbo community was not consulted to identify some of the missing people.

His words: “As at now, the Igbo killed are 36, those injured were 42. Many more are still missing and goods worth millions of Naira lost. Igbo always bury their dead in their ancestral homes and we are saddened by this development.

“We have lost our people and means of livelihood. We request the federal and Plateau State governments to come to our aid by sending relief materials to cater for the victims.

”We do not allow our people to sleep in primary schools and other government buildings when there are problems. We take custody of our people till the wounds are healed but whenever others are taken care of in terms of relief materials, we are not always considered and never compensated.”

Obilom also frowned over the neglect of the Igbo in similar situations, asking that the community should be taken into consideration in terms of compensation.
According to him, the “inhuman treatment, marginalization and rejection must stop. We are always the most hit in the situations like this but we are always forgotten.

”We are in support of moving traders out of  the terminus and its environs but the satellite market should be strengthened to ensure sanity and orderliness.”
He also called on Boko Haram and other perpetrators of violence to “embrace peace as killing of innocent people would not solve the problems.”