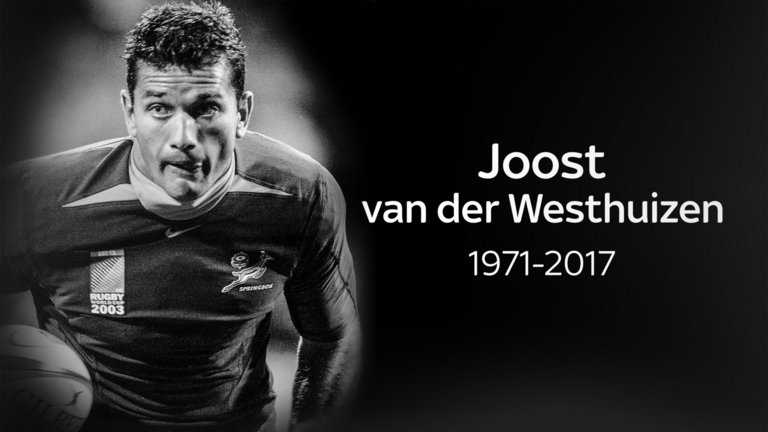 Joost van der Westhuizen was a giant of South African rugby and one of the best scrum-halves of all time.

His death at the age of 45 from motor neurone disease seems particularly cruel considering the physicality he was known for on the rugby field.

Van der Westhuizen was born in Pretoria in February 1971 and spent his entire senior career at the Blue Bulls between 1993 and 2003.

He captained them to the Currie Cup crown in 1998 and 2002, and also starred for the Bulls on the Super Rugby stage.

But it is playing in the green and gold of the Springboks that he will be best remembered.

Possessing an unusually large frame for a scrum-half – standing at 6ft 1in tall and weighing nearly 14 stone – Van der Westhuizen thrived during games of high intensity which required powerful running and aggressive defending.

His stature enabled him to challenge many forwards at breakdowns, especially when rucks were taking place, and suited South Africa’s abrasive brand of rugby.

A dramatic dive pass to a waiting outside-half was also a signature of his game.

There was a match-winning try on debut in a 29-26 victory over Argentina in Buenos Aires, a portent of the fairy tale to come.

South Africa hosted the 1995 World Cup and there would be a pot of gold at the end of the competition for the ‘Rainbow Nation’.

During that tournament, Van der Westhuizen enjoyed great success with winger Chester Williams by leading rapid attacks on the blind side of the scrum.

But the most enduring memory he provided was of him stopping Jonah Lomu, the fearsome 6ft 5in and 18 stone-plus All Blacks winger, in a hard-fought 15-12 World Cup final victory against New Zealand.

Lomu made a typical battering run from deep and defied several challenges before Van der Westhuizen hauled him down just outside the 22-metre line.

It was a pivotal moment which set up the dream denouement to the day for South Africa, as president Nelson Mandela presented the World Cup to captain Francois Pienaar wearing a Springbok rugby jersey and baseball cap.

By the time of his third World Cup in 2003 he was past his best, and South Africa were thrashed 29-9 by New Zealand at the quarter-final stage.

It was his 89th and final Test appearance, a Springboks record at the time.

He had also scored 38 Test tries, which stood as a South Africa record until Bryan Habana beat the mark at the 2011 World Cup.

Van der Westhuizen became a rugby commentator after his playing career and was inducted into the International Rugby Hall of Fame in 2007.

He became a member of the World Rugby Hall of Fame when the International Hall was merged with the IRB Hall of Fame in 2014.

By then, Van der Westhuizen had been confined to a wheelchair after being diagnosed with motor neurone disease in 2011.

He set up the J9 Foundation to raise awareness of MND and offer help to those families affected by it.

Van der Westhuizen was estranged from his wife, the Afrikaans singer and media personality Amor Vittone, with whom he had two children, son Jordan and daughter.