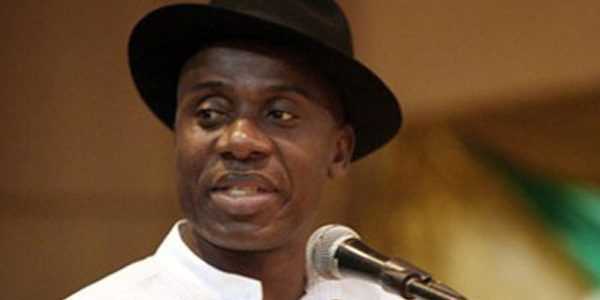 That was the scene yesterday as militants disrupted a Save Rivers Movement (SRM) rally in Bori, the traditional headquarters of Ogoni and the seat of Khana Local Government Area of Rivers State.

Secretary to the Rivers State Government (SSG) George Feyii, an Ogoni; Chief of Staff, Government House, Port Harcourt, Chief Tony Okocha and many allies of Governor Rotimi Amaechi were caught up in the violence. Their vehicles were riddled with bullets.

The governor, alarmed at the scale of the violence, described President Goodluck Jonathan’s administration as worse than the late dictator Gen. Sani Abacha’s regime.

Two persons were feared shot dead by the rampaging militants, who started shooting from 4 am at the venue of the SRM rally — the All Saints’ Anglican Church, Bori, not far from the Rivers State Polytechnic, Bori-Ogoni.

The militants’ attack came exactly one week after the SRM’s rally billed for the Rivers State College of Arts and Science, Rumuola, Port Harcourt was disrupted by the police, with the representative of the Rivers Southeast Senatorial District, Magnus Abe, shot in the chest. He is still recuperating in a London hospital.

Amaechi, who is also the Chairman of the Nigeria Governors’ Forum (NGF), later in an interview at the Government House, Port Harcourt, after inspecting the shot and vandalised vehicles at 4:45 pm, also accused the Federal Government of desperation over the 2015 elections, adding that Jonathan wants to win at all costs, even if people die.

Amaechi insisted that the disrupted Bori rally must be repeated on Saturday and he promised to attend.

Some commissioners, Amaechi’s allies, top government officials, leaders and supporters of the SRM ran into the bush to prevent being shot by the rampaging militants. Bori people and students scampered to safety.

The police, however, protected the Grassroots Development Initiative (GDI) rally at Degema, the headquarters of Degema Local Government Area.

The Rivers PDP, through its spokesman, Pastor Jerry Needam, accused the main opposition All progressives Congress (APC) of resorting to violence.

The Coordinator of the SRM, Igo Aguma, who is a former member of the House of Representatives and the group’s lawyer, Ken Atsuwete, however , described Muhammad as a liar, insisting that the SRM notified the police of the Bori rally and applied for protection.

The SRM rally was fixed for 2 pm. Canopies, chairs and had been arranged. The podium was erected. All were by the militants, who turned the venue into a theatre of war.

Channels Television was billed to transmit the rally live, but its Mercedes Benz Outside Broadcasting (OB) van (Lagos FST 928 BX) and a Toyota Hiace bus, with registration number: Lagos: AGL 250 AP, were vandalized. The organisation lost a camera, with the crew members, who were setting up their equipments losing valuable items to the attackers.

When our reporter got to Bori at 1:58 pm, for the 2 pm rally by SRM, some fierce-looking policemen barricaded Birabi Memorial Grammar School, the main road from the East-West Road, that leads to Kono Waterside.

Our reporter was directed to an alternative road towards Kaani-Ogoni, to link the junction of Rivers State Polytechnic, Bori, with another set of policemen barricading the road, making it difficult to get to the nearby venue of the rally (All Saints’ Anglican Church).

One of the policemen said the venue had been sealed off. Nobody was to be allowed to move beyond that point, he said.

It was gathered through some of the Channels television crew members, who would not want their names in print, that the militants came to the venue of the rally thrice. The first set came with machetes around 7 am and upturned the chairs, tables, canopies and stage.

The second group of militants, with masks, who scaled the fence, invaded the venue at 10 am with guns and were shooting sporadically, to scare people from attending the rally. The more daring third set of militants, who were also masked, were shooting directly at people and vehicles.

Amaechi said: “When they say President Obasanjo (Olusegun) is lying about snipers and 1000 names, they say Nigeria Police have no rubber bullets. From where did the rubber bullets come? Is it one of the snipers that shot at Magnus (Abe)? Could it be that they were aiming it at me? For the first time, I will want to expose myself. I will be there (Bori’s rally). I will be there on Saturday; let them come and shoot.

“There is serious danger for democracy. What you are seeing here (in Rivers State) is close to what Abacha was doing. This is an Abacha government. Tell me the difference. Lives were being lost, people were being shot. Journalists were being arrested. This is worse, because even governors were not arrested under Abacha, but as a governor, hmmnn!

“Officers of the Rivers State Police Command met at the Police Officers’ Mess and Mbu declared war against the Rivers State Government and Rivers people. That he is determined to ensure that they are not protected and he warned them (policemen) in advance not to come to protect anybody at the rally.

“The implication of that is that he (Mbu) knew there was going to be an attack and he must have been part of the process of the attack. If not, when the people started shooting, what did the police do.

“It shows how desperate the Federal Government is in these 2015 elections. As governor of Rivers State, if we hear gunshots by 4 am, we will give protection from that 4 am. We will go to look for those who are shooting from 4 am. Up to 6 am. They attacked press men and the Commissioner of Police did not react. He did not respond.

“They attacked citizens. I learnt two persons are lying critically ill in the hospital in Bori, whom I have to visit in Bori. I have told them to transfer them to Port Harcourt so that we make sure they do not die.

“They want to win presidential and governorship elections at the cost of human lives. They do not care. One responsibility government has and that is the oath of office we take, is to protect lives and property. There is no oath of office that says I must provide water or light.

“As the President of the Federal Republic of Nigeria, President Goodluck Jonathan holds the Rivers people the responsibility of protecting their lives and their lives are not being protected, because he sent a Police Commissioner, through the wife (Dame Patience Jonathan), who is here (in Rivers State) to pursue an election that is one year away. It is ridiculous.

“There is a difference between President of the Federal Republic of Nigeria and the leader of the PDP (Peoples Democratic Party). The reason for electing him (President Jonathan) is to protect me. He wants to win Rivers State at all costs, even if all the human beings die.”

The NGF chairman said the rampaging militants would have killed the journalists, who covered the rally, but they managed to escape the gunshots.

Amaechi said: “Is President (Jonathan) saying he has lost control of Mbu? He cannot remove Mbu. He cannot tell Mbu what to do or is it that Mr. President has directed Mbu to kill me and kill others?

“Who do you turn to? When the people you ought to turn to (policemen) are the people shooting you. Just one week ago, Senator Magnus Abe was shot by the police and he is in a hospital (in London). He is not in a Nigerian hospital, that they will say they went and arrange. He is in a hospital with heart condition, caused by Mbu and the President (Jonathan) is quiet.

“You will ask yourself, what is going on? Don’t I have opponents? Am I not able to provide for them, the services I ought to provide for them? Let the President take charge. I do not know of alternative security arrangement, but I will be there on Saturday (rescheduled SRM’s rally at Bori). I am going there for a rally on Saturday.

“Mbu is pretending to be relating well with me or has cordial relationship with me. From the first day Mbu stepped into this place (Rivers State), he arrested the orderly of the SSG (George Feyii) and detained him. From the Port Harcourt International Airport, as he arrived. He had not got into town. Is that cordial relationship?

“SRM not only applied for police protection. They applied; even the last one, but the police commissioner (Mbu) refused to grant the permission, that he is now ready for war. Not only did they apply, but the law does not say that they must apply. The law does not give the Commissioner of Police the power to deny them. It gives the power to the governor.

“There is a police command in Bori. If they were not aware there was a rally, at least they heard sounds of gun, from 4 am, to the risk of your lives. Suppose you had died, what will Mbu say? We speak because we are involved. Compare what is going on now with what was happening under Abacha’s regime.”

The governor admonished Rivers people and his teeming supporters to remain calm and law abiding, in the face of intimidation and lawlessness, adding that the truth would prevail.

The chief of staff said he heard that policemen escorted the militants to smash the SRM rally. The police, he said, arrested nobody, in spite of the presence of the Area Command and a police division in the area, as well as the base of MOPOL 56 at nearby Saakpenwa-Ogoni.

Okocha said: “We are not deterred. We are a lot more emboldened. As citizens of Nigeria, we have freedom of assembly. We have seen the new tendency in Rivers State. January 12 was attack by police. Today (yesterday) is attack by militants.

“SRM members do not carry arms. With what we have seen now, we need to take precautionary measures. The GDI rally at Degema is going on with full police protection. Police have taken sides and not being professional.”

The chief of staff also wondered that in spite of writing to the police to inform them of the Bori rally, no policeman moved near the venue, despite the heavy shooting from the militants.

The SSG, who was also at Bori, described the incident as “a show of shame”.

The Coordinator of the SRM, Igo Aguma, said that he called Mbu four times to inform him of the shooting, but the police chief did not answer the calls. The text message he sent Mbu at 11:17 am had not been replied as at press time.

The Rivers PDP also raised the alarm over the increasing spate of violence in the state, which it alleged was masterminded by the Amaechi administration, SRM and APC to continue to create a state of insecurity, to justify their call for the removal of the commissioner of police.

PDP said: “The crisis, which left two Ogoni youths shot and their conditions are very critical and unstable in a private clinic in Port Harcourt, according to reports, followed a local resistance of the APC, Rotimi Amaechi and the Save Rivers Movement by the Ogoni people today (yesterday) in Bori.