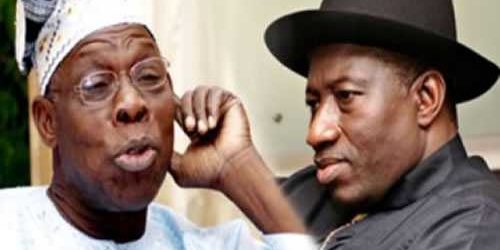 The Presidency on Sunday said President Goodluck Jonathan was favourably disposed to mending fences with former President Olusegun.
The Special Adviser to the President on Political Matters, Mr. Ahmed Gulak, made this known on Sunday that the feud between Jonathan and Obasanjo was adding to the worries of the leadership of the Peoples Democratic Party.The sour relationship between the duo became public knowledge in December 2013 when Obasanjo wrote a letter titled “Before it is too late” to Jonathan.In the letter, he accused the President of condoning corruption, training snipers, putting some persons on a watch list and engaging in other acts capable of destroying the country.Jonathan replied Obasanjo openly, saying his letter was designed to incite Nigerians against him.There were however speculations that some former leaders had approached the President and Obasanjo to reconcile them.Although Gulak, in an exclusive interview with one of our correspondents in Abuja, said he was not aware of such moves, he added that there was nothing wrong with it.He stated that in spite of the exchange of letters between the two leaders, Jonathan still held Obasanjo in high esteem.The presidential aide said the President did not only see Obasanjo as a leader but also as his father.He said the President had nothing against Obasanjo because he believed strongly that only God was perfect.The Presidential aide said, “We are not aware of the reconciliation moves but there is nothing wrong with it. In fact, it is a good development because our party, the PDP, is always open to reconciliation.“Only God is perfect. If in the wisdom of the nation’s elders, there is a need for reconciliation, there is no problem.“Let me assure you however that President Jonathan has nothing against Chief Obasanjo. He considers the former President as a leader and a father, that is why he calls him Baba.“President Jonathan has highest respect for Chief Obasanjo. The recent exchange of letters does not mean that he does not hold the former President in high esteem.“Nobody is perfect. No leader is perfect, it is only God that is perfect. There is no alternative to peace in the country and in our party.”However, a media aide to Obasanjo, Mr. Tunde Oladunjoye, said on Sunday that the ex-president was not at war with Jonathan.Oladunjoye, in a telephone interview with one of our correspondents in Abuja, also said he was not aware of any move to reconcile the two leaders.He said, “Baba did not write that letter as an enemy. He said he wrote the letter as part of his duties to his political godson, the PDP and the nation.“I can tell you without any fear of contradiction that Baba is not at war with anybody, including the President. That is why when the President wrote his own letter, Baba said he had no comment to make.”Oladunjoye wondered why some people felt they could profit from a dispute that did not exist between Obasanjo and Jonathan.He added that Obasanjo had, in his letter, stated that he would maintain his serenity.But a top source in the PDP said the ruling party’s leadership was at a crossroads on how to handle the misunderstanding between the two leaders.The source said the disagreement was not good for the PDP, especially at this critical period when all hands must be on the deck ahead of the 2015 general elections.The source said,

“Those who are saying that the former President is not popular and cannot even win election in his home state are ignorant of the enormous popularity he has in and outside the country.“The former President is very popular in the North and even in the South-South because he was responsible for the Jonathan Presidency. So, people there still respect him for that.“Remember that it was this same former President who calmed the frayed nerves at the Eagles Square during the 2011 presidential primaries and he was also the one who asked the late President, Alhaji Umaru Yar’Adua to step aside if he knew his health could no longer allow him to do the job when he was sick.”He added that some PDP governors loyal to the former President could secretly go to him to seek advice on any issue, including the running of the party and the country.“The President should know that his popularity and that of the party is declining since the sycophants around him would not tell him “ he added.He said he expected the President and the PDP leadership to take precautionary measures in dealing with the crises in the party.The source said, “We have lost five governors and 37 members of the House of Representatives and we may also lose more.“The 2014 budget is still there before the National Assembly and all these are happening in an election year. Definitely, we have rookies at the helm of affairs of the party and those advising the President are not helping him.”