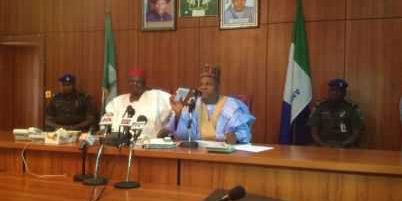 Borno State Governor, Alhaji Kashim Shettima, has accused the Nigerian Government of abandoning the state in the wake of the Baga tragedy.

A yet undetermined number of people were killed when government forces aided by troops from Chad and Niger hunted Boko Haram insurgents in Baga, a town located near the Chad border in the weekend of April 19.

While the Borno State Government alleges that over 200 civilians were massacred during the operation, both the joint military task force and Nigeria’s disaster management agency NEMA however put the number of casualties at below 40.

An emotional Governor Shettima lamented his people’s fate yesterday while receiving Governor Rabi’u Musa Kwankwaso of Kano State, who was on a

Speaking at the Government House, Maiduguri, after receiving a cheque for N20 million donated to the victims of the Baga crisis on behalf of the government and people of Kano State, Shettima said: “This is the only assistance we got from any state including the Federal Government since the beginning of this crisis. We have been left on our own to swim or sink and Gov. Kwankwaso is the only leader that came to identify with us in our time of difficulty. But I want to assure everybody that Borno will bounce back, insha Allah.

Borno is the headquarters of Boko Haram and has consequently suffered the heaviest toll in the war between Nigeria and the insurgents who have yet to accept an amnesty offer from the Nigerian Government.

Boko Haram is fighting for the Islamisation of Africa’s most populous country – a mission which most people see as impossible to accomplish since Muslims form roughly half the Nigerian population.