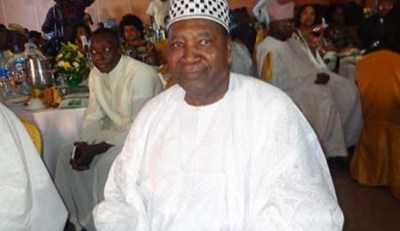 President Goodluck Jonathan, Lagos State Governor, Babatunde Fashola and the National Publicity Secretary of the All Progressives Congress (APC), Lai Mohammed, joined a host of Nigerians who expressed grief on Monday at the passing of one of Nigeria’s leading entrepreneurs, philanthropists and sports enthusiast, Chief Molade Okoya-Thomas at the age of 79.

Okoya-Thomas was said to have died on Sunday night at the upscale Reddington Hospital in Victoria Island, Lagos.

As news of his death spread, many sympathisers thronged his residence in Victoria Island to condole with his family.

The somber atmosphere became charged when Fashola drove himself to the residence.

He said: “On behalf of the people of Lagos State, I commiserate with you. He was a father to me in words and deeds. We will all miss him.

“His fidelity and commitment were undaunted. We will miss his counsel and undying desire to serve. No assignment was too small for him once it afforded him the opportunity to serve.

“It’s a big void, but God fills all void. God will bring back laughter to this home. As we mourn his passing, we also celebrate his life because his humility was sometimes embarrassing.”

Opening up on her father’s passing, Jumoke Okoya-Thomas said: “It was not easy for us last night (Sunday) when we rushed him to the Reddington Hospital by 9.15 pm.

“We could not sleep throughout the night and were awake thinking of what he was to us. He was a wonderful father. He would save his last kobo to give those in need.”

In his message to the family, the president in a statement by his spokesman, Dr. Reuben Abati, extended his sincere condolences to members of the Okoya-Thomas family, his friends, associates, business partners within and outside Nigeria, and the people of Lagos where he held the traditional title of Asoju-Oba.
The president said he shared their pain and sorrow as they mourn the late Okoya-Thomas, who was also honoured in his lifetime with the traditional titles of Odofin of Ile- Ife and Bobasuwa of Ijebu-Remo.

Jonathan urged members of the Okoya-Thomas family and all others who mourn their patriarch to be comforted by the knowledge that he lived a very worthy and fulfilled life, and left a legacy of great entrepreneurial achievements for his successors to build on.

Before his death, the deceased was the Chancellor of the Lagos State University and Chairman of CFAO Nigeria Limited.

According to Wikipedia, the deceased subsequently proceeded to Baptist Academy for his high school education where he graduated as the best student.
He thereafter studied accountancy at Balham and Tooting College of Commerce and had further training in Accounting at Columbia University, New York, US.

Upon returning to Nigeria, he gained employment as an accountant at CFAO and rose through the ranks to become its chairman.

He was also a recipient of the Chevalier de la Legion d’Honneur, the highest national honour given by the French to a foreigner.