Jonathan denies the undeniable, says he is not anti-Itsekiri 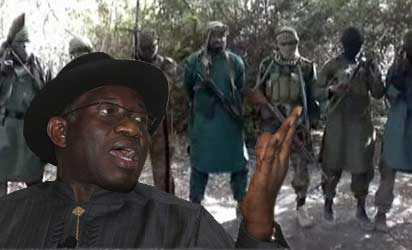 PRESIDENT Goodluck Jonathan has rejected insinuation of partisanship over the postponement of the ground-breaking ceremony for the Gas Revolution Industrial Park at Ogidigben in the Warri South West Local Government Area.

The president, last Friday, cancelled his planned trip to perform the groundbreaking ceremony of the multi-billion industrial park following threats from Ijaws youths to disrupt the event unless their demands were first met.

But briefing correspondents at the Presidential Villa on Monday, the Special Adviser to the President on Media and Publicity, Dr Reuben Abati, said Jonathan regretted the unnecessary controversy and called for the immediate resolution of the crisis.

He said Jonathan was deeply saddened by the “very unjust, uncharitable and unwarranted accusations of nepotism and partisanship that have been made against him in the wake of the postponement.”

Abati noted that the president is particularly dismayed by the “unseemly resort to the abusive denigration of his personal integrity and the whipping up of divisive ethnic sentiments by parties to the totally needless communal disagreement that resulted in the decision to reschedule the ground-breaking event.”

The presidential spokesman added: “it should be apparent to all Nigerians by now that while President Jonathan may be affiliated to the Ijaw ethnic group by birth, he knows full well that he was elected president of all Nigerians and has always shown by word and deed that he will always uphold the oath he swore on assumption of office to protect and promote the interests of all citizens with justice, equity and fairness to all as his guiding principles.

“The elders, community leaders and parties to the dispute over the location and ground-breaking event for the Gas Industrial Revolution Park who have resorted to threats and accusations of partisanship against the president in press conferences and paid adverts in newspapers are therefore being most unfair to him and doing a great disservice to continuing efforts to forge greater national unity and peaceful coexistence of all Nigerians.”

Abati assured all concerned persons that as the leader of the nation, Jonathan is not, and cannot be on the side of any party to the avoidable dispute over the location and ownership of the site of the Gas Revolution Industrial Park.

He added that the project itself was conceived for the benefit of all Nigerians, not just Itsekiris, Ijaws, Urhobos or other ethnic groups in its immediate environment.

He remarked that in terms of employment opportunities, it is projected that the Gas Industrial Revolution Park will ultimately create up to three million jobs for Nigerians in its catchment area and other parts of the country.

Abati added that all the people of Delta State and Nigerians living in other parts of the country will also benefit greatly from the project by way of improved power supply and other ancillary products such as fertilisers, petrochemicals and more raw materials to boost local industrial production.

President Jonathan therefore urged all parties to the communal dispute over the location and ownership of the site of the Gas Industrial Revolution Park to cooperate fully with ongoing efforts by the Federal Government and the Delta State government to peacefully resolve all outstanding issues so that the project can proceed apace for the benefit of local communities, all Nigerians and investors.

The presidential aide further stated: “for the avoidance of any doubt whatsoever, the postponement of the ground-breaking ceremony for the project earlier scheduled for last Friday was not in furtherance of any anti-Itsekiri agenda.

“Rather, it was borne out of the clear need to give all concerned parties more time to achieve the communal peace, understanding and harmony that will greatly facilitate the project’s speedy actualisation for the benefit of Itsekiris, Ijaws, Urhobos, Ibos, Isokos and all other Nigerians.

“In the greater interest of the nation, President Jonathan expects the respected elders and leaders of the concerned communities to heed the pleas of federal and state government mediators and expeditiously resolve their differences for the good of all and the progress of the country.”
Source: BGN