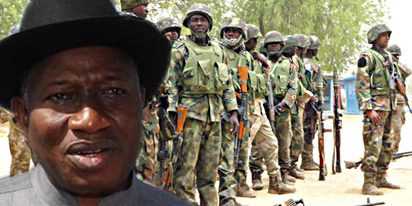 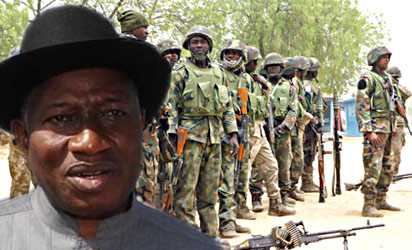 Nigerian warplanes are carrying out air strikes against Boko Haram militant bases at Bama, Borno State, a senior official said yesterday, in a government counter-attack against Boko Haram’s drive to create an Islamist enclave.
The official, who asked not to be named, told Reuters Nigeria’s military was battling Boko Haram fighters at Bama, 70 km (45 miles) southeast of the Borno state capital Maiduguri.

Air strikes have been carried out “on all the Boko Haram bases”, the official said, adding this reflected President Goodluck Jonathan’s order for a “fully-fledged war” against the group which has waged a bloody insurgency since 2009.
“Bama today is the centre of the military battle with the terrorists … Boko Haram is being repelled by the Nigerian troops as we are talking now,” the government official said, without giving details of the operations or casualties.
The battle over Bama, and Boko Haram’s storming of towns and villages to the north, east and south of Maiduguri in recent weeks, has raised fears of an attack on the Borno state capital, prompting hundreds of civilians to flee.
“Even today, we can see so many people leaving … the buses are going out plenty now,” Musa Sumail, a human rights activist in Maiduguri who reports on the violence in the northeast, told Reuters. He said he had seen at least one or two Nigerian government fighter jets in the skies above Maiduguri.
We ‘ll do everything to defend our territorial integrity –Defence Hqtr
Indeed, the Defence Headquarters said the armed forces will do everything to defend the nation’s sovereignty.
In a statement by Major General Chris Olukolade, Director of Defence Information said,  the armed forces said: “DHQ wishes to reiterate the pledge and commitment it made while briefing the Joint Committee on Defence of the National Assembly to the effect that everything will be done to reverse the situation and defeat the rampaging terrorists.
“While welcoming all the concerns shown by Nigerians and a section of the international community following the increased menace and activities of terrorists, it is necessary to reassure all that the Nigerian Armed Forces is more than ever determined and committed to the defence of the sovereignty and territorial integrity of Nigeria, regardless of any odd.
“It is not only the pride and reputation of the military that is at stake but that of the entire nation.  We therefore urge our citizens not to lose hope or be disenchanted but to remain steadfast and supportive of the military as all steps are being taken to ensure the success of the counter-insurgency operations, especially at this crucial time when our sovereignty is being challenged.
“With this in mind, it is important to reiterate that the Nigerian military is fully conscious of its obligations to the Nigerian state and remains willing and ready to perform its duties with utmost diligence. Therefore, what the military requires at this critical period in the nation’s history is not pillories but continued support from all stakeholders and comity of nations.
“Indeed, this is not the time to despair or shift blames.   Rather it calls for concerted effort by all and sundry to stop the agents of darkness who seek to destroy our country and civilization. On its part, the Nigerian military as a fighting force, assures Nigerians once again that this battle will be won.”
Military ‘ve killed 1,200 insurgents –AVM Marizu
Sharing this view, former Air Officer Commanding Logistics Command of the Nigerian Airforce, Air Vice Marshall Chris Marizu (rtd), yesterday, cautioned politicians against utterances that were capable of pitching the armed forces against the citizens they were supposed to protect noting that the military forces have killed 1200 Boko Haram insurgents in the battle for Bama, Borno State.
He spoke in the light of the current challenges in the counter-terrorism efforts in the North east which has understandably elicited a sense of apprehension among citizens and even foreign allies, as
He made the disclosure just as the President of Course 18 participants of the Nigeria Defence Academy, Air Commodore Olufemi Agbetuyi warned that it was high time the nation stopped mixing politics with security issues.
Speaking at the 18th regular course re-union in Abuja yesterday, AVM Marizu said, “People should know that some persons who have done so much for this country and the military institution cannot just be rubbished on the altar of politics.
“Some unscrupulous citizens of this country are using the advantages that they enjoy under democracy to malign the military with innuendos and statements without facts. All the things that Mr. Davies said for instance, there was nothing in it and no facts to buttress anything. The angle of aircraft for instance, was Ihejirika the Chief of Air Staff?
“It shows there are undemocratic elements working in tandem with outsiders trying to destroy this country. For instance, the last few days, the media has been awash with reports that Boko Haram has over-run Bama and taken over the city whereas, the reverse is the case. We have troops there and we are in touch on a daily basis” “The truth is that as at Tuesday, our soldiers had killed over 700 Boko Haram insurgents during the battle. The following day, another 500 terrorists were killed.
What is happening is not what is being reported in the newspapers and sometimes I wonder if the media are Nigerian media or what they seek to gain by running our soldiers down” In his contribution, Air Commodore  Agbetuyi  cautioned politicians in the country against trying to bring the name of the military into disrepute warning that doing so will amount bringing down the military. On allegation against General Azubuike Ihejirika, he said, “Some political elites do not understand what the man went through as COAS, the sleepless nights, the sacrifices General Ihejirika made for the country.
I recall how he was tackling the security challenge in the country and some Nigerians who do not understand or pretending not to, or some enemies of Nigeria said the army was killing people indiscriminately. The same people today are saying he sponsors Boko Haram. Does it make sense?”