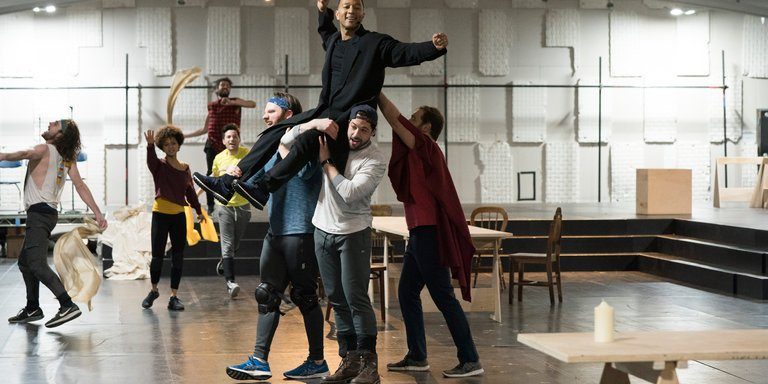 John Legend hasn’t done musical theater since high school. But when NBC called to ask if he might be interested in playing the title role in a live broadcast of “Jesus Christ Superstar,” he said, “I had a hard time turning down the role of Jesus Christ.”

Now Mr. Legend, best known as an R&B singer and songwriter, is channeling his inner rocker as he leads a starry cast of the latest televised musical.

“Jesus Christ Superstar,” with songs by a young Andrew Lloyd Webber and Tim Rice, is a rock musical about the week that ends with Jesus’s crucifixion. Controversial when it opened on Broadway in 1971 — some Christians found either the style or substance of the storytelling blasphemous, and some Jews were concerned about the portrayal of Jewish leaders — it has since become a staple of the musical theater canon.

The broadcast will air Sunday (that’s Easter) on NBC, starting at 8 p.m. Eastern Time. It is being billed as a live concert, rather than a fully staged musical, and it will be performed inside a 19th-century National Guard armory in Williamsburg, Brooklyn, before a live audience of 1,300.

The production, directed by David Leveaux, is big — 500 crew members, 33 musicians and 44 cast members, including the pop singer-songwriter Sara Bareilles as Mary Magdalene, the hard-rock performer Alice Cooper as King Herod and the stage actor Brandon Victor Dixon as Judas, as well as Mr. Legend as Jesus. The four lead performers talked about their relationships to faith, musical theater and “Superstar” in separate interviews. These are edited excerpts from the conversations.

On religion I grew up in a Pentecostal Christian family, pretty fundamentalist. My grandfather was my pastor growing up. My dad is a pastor himself and played drums in the church choir, my mother was a choir director, and my grandmother was the church organist. My dad would even play Jesus in some of our passion plays in church. I’m not religious now, I would say, but there’s no way that you are raised in that environment, and also grow up singing that music, without it having an impact on your life.

On musicals My first contact with Andrew Lloyd Webber was in a show choir, “Glee”-style, where we would sing show tunes. And I was in a few actual theater productions — “Big River,” “Fiddler on the Roof,” and “You’re a Good Man, Charlie Brown” — when I was in high school. The hardest part now was just learning all the material — I’m so used to performing songs that I wrote for myself.

On ‘Superstar’ The show is an interesting conceit — the idea of thinking about the real human emotions that someone that a lot of people see as a deity may have felt; the idea that he might have felt doubt and fear and resentment toward his father; the idea that he was betrayed by his friends. And, in this show, Andrew and Tim suggest that Judas may have had a point — Judas may have had really good reasons for questioning Jesus’s m.o.

On religion I grew up in the Episcopal Church, went to private school in that church, went to chapel every day. It was a constant through my adolescence. Then we started to shift, to the Unitarian church. Now, spirituality plays a role in my life, but not religion. For me religion is a political construct, and spirituality is a community construct, and there’s a real difference.

On musicals I work in musical theater because people keep writing quality stories in the genre, and I’m really all about investing in a piece that says something about our current time, that is a reflection on who we are today.

On Judas What I’ve learned is that Judas is far less culpable of the things that he is accused of than people assume. Judas feels acutely a perversion of the message, and he also feels the danger of the message getting out of control — of dedication and love and unity and community turning into fanaticism and zealotry.

On religion I’m definitely someone who has faith and a belief in God and the workings of the universe at large, but I don’t subscribe to a particular doctrine. I grew up Catholic, and I went to Catholic school, so the story of Jesus and the crucifixion are very near and dear to my heart. I still go to Catholic Mass with my parents when I go home. The ritual and the familiarity and the comfort of our church community growing up is something I look back on really fondly now, even though I don’t go to church any more.

On musicals It’s this medium that exists somewhere between feet-on-the-ground and lifting off. It’s sort of elevated reality, where you get to tell really beautiful stories, but everything is slightly surreal, and I really love what unlocks emotionally for people.

On Mary Magdalene She’s actually a very powerful figure, and she is really motivated by her love for Jesus and his message. Historically, she was definitely a disciple and a believer and a champion of his message. She’s got laser focus on her support of Jesus, in my interpretation, and that’s how I’m coming to it, with a pure sense of the ultimate kind of love for someone.

On ‘Superstar’ I rented the film — I was probably 12 or 13 and I was really into a lot of Andrew Lloyd Webber’s musicals at the time, and I was listening to everything I could get my hands on. I remember just being really emotional about the music. What was so avant-garde and so revolutionary about Tim and Andrew’s approach was that they really emphasized the humanity of these figures that have become so mythologized for us over the years. For someone who grew up in the church, as intimate as your relationship to Jesus can be, it’s really interesting and nuanced to look at him as a human and to look at Mary as a human and Judas as a human.

On religion My dad was a pastor. My grandfather was an evangelist. And my wife’s father is a Baptist pastor. I was basically the prodigal child — I grew up in the church, went as far away as you could possibly go, and then came back. When I got sober, I started understanding — I had all the fame and the money and everything that went with it, but I started realizing what was important to me was my relationship with Jesus Christ, who I just absolutely torture in this show.

I study the Bible every morning. When I’m at home I have a Wednesday morning men’s Bible study. I pray before every show. I go to church every Sunday with my wife and kids. I don’t think I’ve ever been more happy in my life. People say, ‘Think of all you gave up to be a Christian.’ What did I give up? Dying of alcoholism? I’m not giving anything up. I’m giving it back, to him.

On musicals I am just fascinated by the musical. One of my Sirius stations is always Broadway. ‘A Chorus Line’ was one of the greatest ones. And ‘Guys and Dolls’ — my dad was a big fan of Damon Runyon.

When I was 16, we had a band called The Spiders, in Phoenix, and we got a call for a production of ‘Bye Bye Birdie’ — ‘Would you guys be the Birdies?’ So we got to be in this run, in real theater. That may have been where the whole Alice Cooper theatrics came from.

On Herod I think he’s going to be sort of an Elvis impersonator — I’m all in gold, and I’ve got a gold suit on that fits really good. The director wants this guy to be half rock star, half king. That’s how I want to play this. This Herod is a swirling mass of paranoia and ego. He starts out being very egocentric, but he’s getting angrier and angrier as it goes along, and pretty soon at the very end he’s right in Jesus’s face — he’s so tired of this guy.

On ‘Superstar’ There has never been a character in history that has ever had more written about him than Jesus Christ. There’s an underlying thing that everybody still wants to know who this guy was.