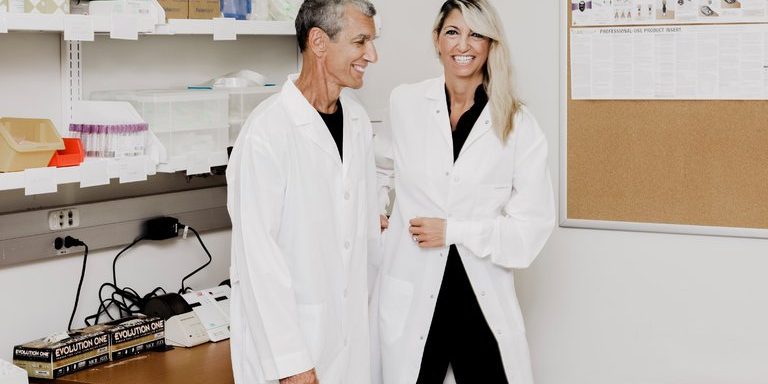 She was a brain researcher and an authority on the scientific basis of love. He, too, was a neuroscientist, but with an expertise in loneliness. She was in her mid-30s, he in his late 50s.

Both were wedded to careers in separate hemispheres — until they happened to be seated beside each other, serendipitously, at dinner on the last night of a neuroscience research symposium in Shanghai.

Before going their separate ways, they left the restaurant together. A romantic full moon was rising over the East China Sea. He snapped a photograph. A few weeks later, she emailed him to request a copy (which she later admitted was just a pretext to resume their brief acquaintance).

She fell in love. He felt lonely without her. Within eight months they were engaged. In 2011, they married.

She took her husband’s name and joined him at the University of Chicago at the Pritzker School of Medicine. They not only shared the same office (the sign on the door said “The Cacioppos”) but also the same desk. They collaborated on more than a dozen articles about the neurology of social connections. In 2015, when he developed salivary gland cancer, they slept in the same hospital bed, in matching hospital gowns.

Dr. John Cacioppo died on March 5 at home in Chicago. He was 66. His wife said the cause had not yet been determined.

Dr. Cacioppo (pronounced kass-ee-OH-po) and his Ohio State University colleague Gary Berntson were, in the early 1990s, the founding fathers of what they called social neuroscience.

A new academic domain, it bridged biology and psychology and was inspired, Dr. Cacioppo once explained, by an insight he had after surviving a near-fatal car crash: that love and social connections are what really matter in life.

He estimated that about one in four Americans are lonely, without any confidants, and that social isolation results in negative emotional and physical consequences.

“Chronic loneliness increases the odds of an early death by 20 percent,” Dr. Cacioppo told The Guardian in 2016, “which is about the same effect as obesity, though obesity does not make you as miserable as loneliness.” (Although, he pointed out, loneliness can also make you gain weight if you binge on sweets to ease your misery.)

He drew a distinction between loneliness and being alone.

Indeed, he said, having fewer social connections can sometimes be healthier.

“Millionaires, billionaires tend to feel lonely,” Dr. Cacioppo said. “A lot of athletes often feel lonely. Lots of people want to be their friend, but how would you feel if all the people who want to be your friend, you had the alternative interpretation — that they want material or social benefits that you could give them.”

At his death, Dr. Cacioppo was a psychology professor at the University of Chicago, director of the university’s Center for Cognitive and Social Neuroscience and chairman of the Social Psychology Program.

He received scores of awards, was the author of hundreds of articles and more than a dozen books, including his seminal “Loneliness: Human Nature and the Need for Social Connections” (2008), which he wrote with William Patrick.

“He is a creative genius whose cumulative accomplishments are so inseparable from the field that it is hard to imagine contemporary psychology without him,” said another collaborator at Ohio State, Professor Richard E. Petty.

Professor Amanda Woodward, interim dean of the Division of Social Sciences at the University of Chicago, said Dr. Cacioppo had “an uncommon genius — he was a brilliant scientist and was unique in his ability to see deep connections across diverse fields and to create generative new theoretical frameworks.”

John Terrence Cacioppo was born on June 12, 1951, in Marshall Tex., to Cyrus Cacioppo and the former Mary Katherine Kazimour. His parents owned several businesses, including a chain saw distribution company.

A math prodigy in high school, Dr. Cacioppo was the first in his family to attend college. He received a bachelor of science degree in economics in 1973 from the University of Missouri, where a chance meeting with a psychology professor persuaded him to abandon a law career and pursue a doctorate in social psychology at Ohio State; he received his in 1977.

He and Richard Petty, who was also a first-year graduate student at the time, engaged in so many intellectual arguments that they became roommates, painted an entire wall black and used it to map competing postulates.

In addition to his wife, Dr. Stephanie Cacioppo, director of the Brain Dynamics Laboratory at the University of Chicago and a research professor at the Center for Cognitive and Social Neuroscience there, he is survived by two children, Anthony and Christina, both from an earlier marriage, which ended in divorce.

The social neuroscience first defined by Dr. Cacioppo and Professor Berntson spawned research into the impact of personal relationships on physiology, including cognition, emotions and physical health.

Dr. Cacioppo cautioned that confiding to a psychotherapist was not a substitute for having friends and companions.

“Being just a client of a psychotherapist fulfills some needs,” he said, “but it doesn’t fulfill that real need to have a rich reciprocal bond.”

Similarly, he said the internet’s role in forming social connections depends on whether a website becomes just a destination.

“If the only acceptance you can get of yourself is a fake representation on the web, that’s not going to make you feel connected,” he said. “But if you look at online dating, there you’re using it to meet other people, so not surprisingly that tends to be associated with lower levels of loneliness.”

Dr. Stephanie Cacioppo agreed that loneliness and being alone are different.

“I think we both had come to be real fans of loneliness before we met each other,” she wrote in an email on Monday. “As John would say, and I agreed with him: ‘If you think about what our species would be like without loneliness, it would not be nearly as endearing a species. Loneliness, which compels us to bond with others, gives us what we call Humanity.’ ”

When her husband was sick, she was quoted as saying last year in a “Modern Love” column in The New York Times, “As a couple, we became more united than ever.”

She wrote on Monday: “I did not know what true love was until I met my husband. John taught me what true love really means. And now, thanks to my husband, I am on the verge of knowing what true eternal love is.”