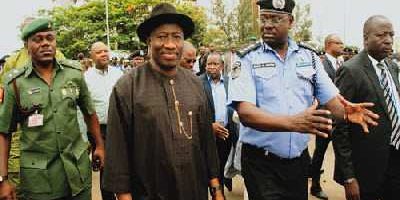 In further escalation of the Islamic separatist offensive in Northern Nigeria, there were reports of pandemonium in Ringim town, the headquarters of Ringim local government area of Jigawa state Sunday night as gunmen stormed the town and started shooting.

An indigene of the town who spoke to Vanguard newspaper said the gunmen arrived Ringim town around 8 pm and took over the personal residence of former Inspector General of Police (seen here with President Goodluck Jonathan), Hafiz Ringim as well as the Divisional Police headquarters, while people deserted their business places and entered their respective homes.

Ringim is the first high profile figure in Nigeria to flee the country and seek asylum in the United Kingdom in what is a foretaste of what is to become to all those occupying high office in Nigeria. It is estimated that nothing less than half of the current ruling class have finalised their plans to flee from Nigeria should the ongoing war in Northern Nigeria spread to other parts of the country. The most popular destination for high profile politicians seeking asylum remains United Kingdom because of the proximity of London to their ill gotten wealth they stole whilst in office. Again United Kingdom is known for their leniency towards corrupt banana republic officials who looted their treasury.

Another destination of choice for politicians preparing their exit from Nigeria into exile is South Africa. The Zuma led ANC government appear to be willing to provide the criminal politicians and high office holders with safe haven because of the massive wealth at their disposal as a result of years of stealing public money.

Mr Ringim, who was sacked on January 25 last year over his bungling of the Boko Haram matter, has lived in the UK ever since he left office. President Goodluck Jonathan decided to replace the inspector general after Kabiru Sokoto, the suspected mastermind of Boko Haram’s bombing of St Theresa’s Catholic Church in Madalla on December 25 2011 was allowed to escape from police custody.

As soon as he left office, Mr Ringim arrived in the UK where among other things he has come for medical treatment. Since he left Nigeria, Boko Haram has executed several police chiefs and the former inspector general is thought to have communicated this to the UK Border Agency in an asylum application he submitted.

Eye witness report said there were bomb explosions in the town. As at press time Sunday night shooting was still going on as the residents were locked up inside their houses. The PPRO Jigawa State Command, ASP Abdul Jinjiri confirmed the incident but said the police had little information to give to the press. A security source told Sahara Reporters that several militants invaded the township with bombs and rocket propelled grenades.

The attack in Jigawa marks further escalation and expansion of the sects armed insurrection in northern parts of Nigeria. “A caller said the gunfight has continued into the night stating that the gunmen have now taken over the home of former Inspector general of Police, Hafiz Ringim, and as well, the police station in the township is under attack”.