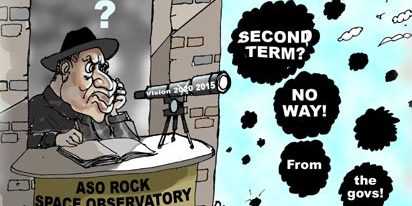 A member of the Peoples Democratic Party’s Board of Trustees, Professor Jerry Gana, yesterday, described as unfair the mounting opposition from the north against President Goodluck Jonathan’s second term bid in 2015.

Prof. Gana, who made the claim in an exclusive interview with Vanguard in Abuja, pointed out that Jonathan had an inalienable right to run again in 2015, as there was no law barring him from the contest.

Gana pleaded with those in the north still opposed to Jonathan’s presidential bid in 2015 to give him a chance to complete his tenure as provided for by the Nigerian Constitution.

According to the BoT member, it is wrong for uninformed persons to claim that Jonathan had hit the limit of his tenure after serving out the late President

Yar’Ádua’s tenure and contesting for the first time as president in 2011.

The former Information minister, who noted with dismay the claim by some northerners that Jonathan signed an agreement with them to run for a single term of four years, disputed the existence of such a deal and challenged those making the allegation to produce the document or keep quiet.

Gana said it was in the interest of the north to support Jonathan for a second term since the President had done so well for the region and Nigeria within two years than any sitting President in Nigeria.

He said the achievements of Jonathan in the areas of improved power supply; roads, agriculture, aviation and job creation were unprecedented in recent years.
The BoT member noted that even if Jonathan did not want to run in 2015, the South-South, which has always supported the North to produce the President of Nigeria, should be assisted by the North to contest and win.