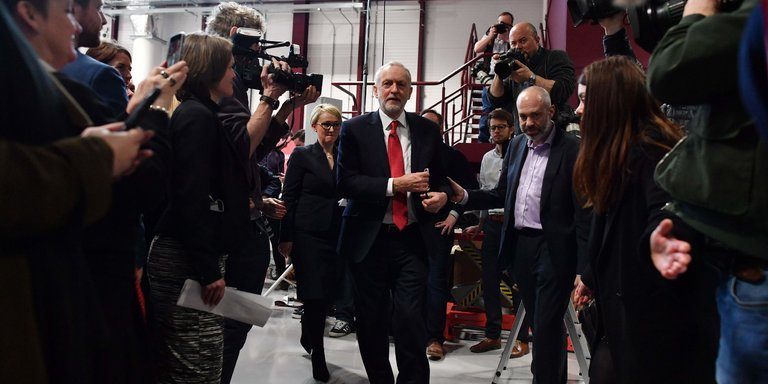 LONDON — After days of damaging headlines, a crisis over anti-Semitism within Britain’s opposition Labour Party seemed to be fading, following reassuring statements and a contrite — if belated — apology from its leader, Jeremy Corbyn.

But for his critics, actions speak louder than words, and on Monday there was a new chorus of criticism when it emerged that Mr. Corbyn had attended a Passover event organized by Jewdas, a left-wing Jewish group that is highly critical of mainstream Jewish organizations and of Israel.

Jewdas describes itself as a forum for “radical voices for the alternative diaspora.” It has called Israel a “steaming pile of sewage,” while criticizing those who organized recent protests against anti-Semitism in the Labour Party.

After a furor over Mr. Corbyn’s defense, in 2012, of a mural by the Los Angeles-based street artist Mear One that was widely viewed as anti-Semitic, the most recent events have brought renewed criticism from several Labour lawmakers.

Jon Lansman, founder of the pro-Corbyn group Momentum, came to the party leader’s defense on Monday, arguing that his attendance at the Jewdas event was “not as significant as it’s being made out,” and telling the BBC that it had been Mr. Corbyn’s “night off, he had nothing in his official diary, his office didn’t know he was there.”

Mr. Lansman acknowledged that past comments by Jewdas about Israel were “certainly not helpful to Jeremy or the cause of opposing anti-Semitism in the Labour Party,” and said that Mr. Corbyn, “a lifelong anti-racist,” was eager to meet the leaders of mainstream Jewish organizations.

A pro-Corbyn Jewish group also came to his defense, and some of his allies have said that attacks on Mr. Corbyn are being masterminded or exploited by politically motivated critics in the party who oppose his left-wing agenda. Nevertheless, his latest intervention, first reported by the political blog Guido Fawkes, suggests that the Labour Party leader is, at best, politically tone deaf.

“He appears to be someone who is unwilling to do the most modest things to shut down the story and who, in fact, does the opposite,” said Steven Fielding, a professor of political history at Nottingham University in England.

Mr. Corbyn, he added, “is either incredibly obtuse or he just doesn’t care,” and he has created a crisis he could have averted simply by “taking the advice of people he doesn’t like.”

In an appearance on Tuesday in Swindon, in southwest England, Mr. Corbyn defended his decision to attend the Seder. “It was very interesting talking to a lot of young people about their experiences of modern Britain, and I learned a lot,” he said. “Isn’t that a good thing?”

Since his election as Labour leader, Mr. Corbyn has been at war with a sizable section of his party, some of whom say he lacks credibility as a potential prime minister. However, he has brought thousands of new supporters to the party, confounded critics by running a much more successful election campaign last year than expected and has since tightened his control of the Labour apparatus.

Yet, even if Mr. Corbyn is in a position of internal strength, the anti-Semitism dispute, along with his reluctance to blame Russia for the poisoning of a former spy in Salisbury, England, has rekindled debate about his leadership.

Schooled in left-wing, protest politics, Mr. Corbyn’s worldview seems to have remained much as it was when he entered Parliament in 1983, at the beginning of a long period on the fringes of the Labour Party.

“His has an implacable, binary, worldview,” Professor Fielding said. “He sees Israel as Zionist, and Zionism as part of imperialism, and imperialism as the part of the enemy.”

The latest questions over anti-Semitism began more than a week ago when a Labour lawmaker, Luciana Berger, asked questions about Mr. Corbyn’s endorsement, in 2012, of a campaign to save a mural in east London that caricatured Jewish bankers playing Monopoly on the backs of the poor. Mr. Corbyn’s office took hours to produce an equivocal response, before eventually issuing an apology.

A protest by Jewish groups outside Parliament was followed by the resignation of Christine Shawcroft, the chair of Labour’s internal disputes panel, after the leak of an email suggesting that she had supported a local candidate who was suspended over accusations of anti-Semitism.

Opponents both inside the party and outside it have benefited politically from the crisis, which comes as the fortunes of Prime Minister Theresa May seem to have improved. It has also opened other divisions with one of the groups that campaigned for Britain’s withdrawal from the European Union, Leave E.U., arguing that Labour was uninterested in combating anti-Semitism because it relied on votes from Muslims.

Nevertheless, senior leaders in the Labour Party appeared to have realized the damage the issue was inflicting, which may be why Momentum issued a declaration on Sunday acknowledging worries about anti-Semitism.

These, it said “should not and cannot be dismissed simply as right-wing smears, nor as the result of conspiracies.”

Momentum added that it was not a case of a “few, extreme ‘bad apples,’ ” but an unconscious bias that “is more widespread in the Labour Party than many of us had understood even a few months ago.”

But the impact of that unequivocal statement of intent to root out anti-Semitism was clouded by Mr. Corbyn’s decision to break bread with Jewdas members, allies seen as sharing his worldview.

“Jeremy Corbyn is a man of his political era and hasn’t got the intellectual flexibility to move on from that, and to question some of his views,” Professor Fielding said.

“That can be a strength. That’s why a lot of people joined the Labour Party under his leadership,” he added. “But it can also be a weakness, and it is frustrating to supporters of the wide project they hope Jeremy Corbyn can advance.”