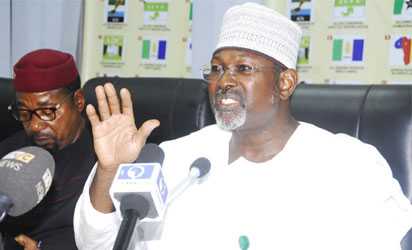 Chuks Okocha in Abujaâ€¨
Chairman of the Independent National Electoral Commission (INEC), Prof. Attahiru Jega, has warned politicians and Nigerians intending  to undermine the electoral process by presenting cloned voters’ cards for accreditation during the polls that doing so will be an effort in futility.

According to the INEC chairman, “We feel confident that people will try to clone cards but a cloned card cannot be read by our card readers. We have examined all the possibilities of hacking and we have taken care of this.

“We feel confident that using the card readers will help us ensure that no cloned card will be used in the electoral process because the card readers will only read cards that have been produced and issued by INEC. For those who for some reason the card readers could not read their finger prints, we have already agreed with political parties on what to do under those circumstances.”

The INEC chairman emphasised the commission’s resolve to use the Card Readers, explaining that beyond checking electoral fraud and improving the integrity of the electoral process, the Card Readers would also assist the commission “to keep record of who has been accredited and also enable us to send that information to a central data base. And if there’s any dispute as to who has been accredited, we will be able to use that information to audit a polling unit and be able to confirm the number of people accredited in that polling unit.”

Professor Jega explained further that: “INEC has in the past been challenged  for not being able to do a statistical analysis immediately after the election to tell not only how many people have been accredited but to tell people what are the demographics of these persons,” adding that tremendous value will be added using the card reader.

Jega further allayed fears and quelled rumours over the last Saturday’s fire incident which occurred at the commission’s central store located at the The Electoral Institute, Central Area, Abuja.

Commenting on the incident yesterday, Jega, assured Nigerians that no materials to be used for the 2015 general election were affected, rather only “some 2011 old stock of election materials, primarily hand bags

for election officials and envelops were destroyed” in the fire incident that lasted for an hour before it was put out.

Professor Jega who explained that the unfortunate incident was caused by a spark in one of the distribution panels at the store when power was restored at around 11 p.m., maintained that: “No materials relating to the preparation of the 2015 general election were affected in the fire incident.

“And that is why in order to minimise speculations, we on Sunday morning contacted the media and even organised a tour where we showed them the extent of the damage.”

The INEC chairman further pointed out that it was practically impossible for INEC to cater for Internally Displaced Persons (IDPs) who may have left the three troubled states of Adamawa, Borno and Yobe or may have left the shores of the country due to non-availability of resources and time.

He however assured of INEC’s commitment towards ensuring that IDPs who remain within the three states participate in the electoral process. He said: “We have placed priority on all IDPs who are still remaining in these states. We have made arrangements and identified venues and in these venues we distributed PVCs and are making arrangements for them to be able to vote in these locations.”

Meanwhile, the commission will  brief local and international observers tomorrow.

The briefing will take place at the Aso Hall of the International Conference Centre (ICC), Area 11 (Eleven), Opposite Radio House, Garki, Abuja.