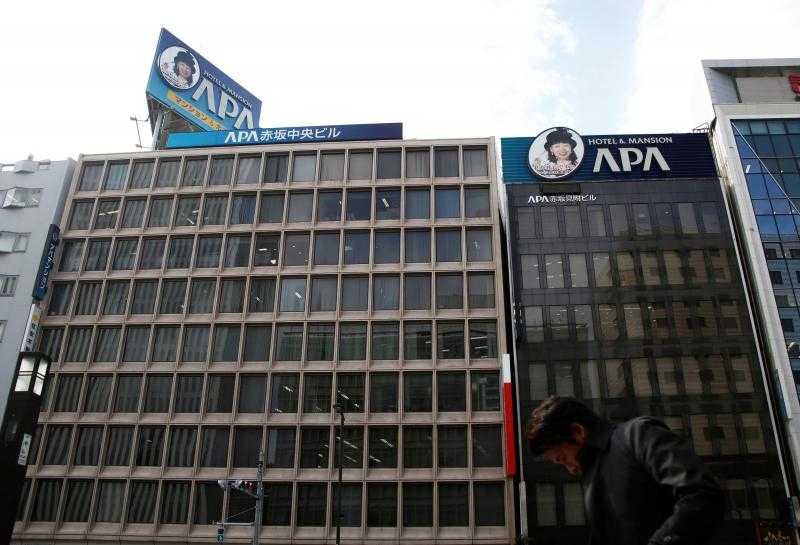 TOKYO A Japanese hotel chain at the center of a furor over books its president wrote denying the Nanjing Massacre in wartime China is prepared to consider removing the books from at least some hotels if it receives a formal written request to do so.

Tokyo-based hotel and real estate developer APA Group came under fire last week for books by president Toshio Motoya, which contain his revisionist views and are placed in every room of the company’s 400-plus APA Hotels.

Motoya, using the pen name Seiji Fuji, wrote that stories of the Nanjing Massacre were “impossible”: “These acts were all said to be committed by the Japanese army, but this is not true.”

China says Japanese troops killed 300,000 people in Nanjing from December 1937 to January 1938. A post-war Allied tribunal put the death toll at about half that. To the fury of China, some conservative Japanese politicians and academics deny the massacre took place, or they put the death toll much lower.

Motoya has previously said the hotel had no intention of withdrawing the books, which have appeared for years but only became an issue in China last week due to a video posting on social media, saying Japan’s free speech laws protect him.

But APA said on its website on Tuesday that when negotiations took place in April 2015 about using some hotels to host athletes for the 2017 Sapporo Asian Winter Games on Japan’s northernmost island of Hokkaido, it received a verbal request from a travel agent to remove all printed matter from rooms.

It added that if there was a formal, written request, it was prepared to respond, without giving further details.

Officials for the Games, set to take place from Feb. 19 to 26, said they wanted to create the best possible environment for athletes but had not spoken with APA since the hotels were decided. They also had not been aware of the books.

“To choose host hotels for the Games, it is a prerequisite that any hotels meet our standards that there will be no promotion of any kind of political, religious or racial views,” said Hisatsugu Yamazaki, manager of the Sports Affairs Department at the organizing committee.

“APA made that statement regarding removing printed matter if there was a formal request. We would like to discuss things with the Olympic Council of Asia (OCA) and decide on a speedy response,” he added.

The OCA is the governing body for all sports in Asia.

APA did not immediately respond to requests for additional comments.

In a statement, the Chinese Olympic Committee said APA’s behavior was a violation of the Olympic charter, which bans the promotion of politics at Olympic-related venues.

China has lodged representations with Japan over this, demanding a “speedy, appropriate resolution”, it added.

China’s tourism authorities have urged tour operators to sever ties with the hotel chain after an escalating row over the denial, and there have been boycott calls on social media against both the hotel and travel to Japan.

Motoya told Reuters in an email last week that Chinese made up only 5 percent of guests at his hotels in Japan and he was not worried about the impact of any potential boycott.