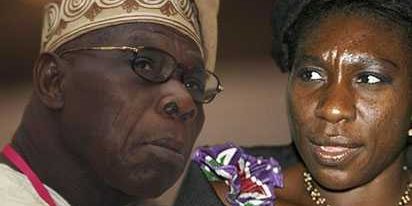 In what is turning out to be a season of open letters, daughter of former President Olusegun Obasanjo, Iyabo, has ruled out further communication with her father till death, describing him as a liar, manipulator, two-faced hypocrite determined to foist on President Goodluck Jonathan what no one would contemplate with him as president.

Senator Iyabo Obasanjo in a letter to her father accused him of having an egoistic craving for power and living a life where only men of low esteem and intellect thrive.
In the 11-page letter dated December 16, 2013 exclusively obtained by Vanguard, Iyabo accused her father of orchestrating a third term for himself as president, cruelty to family members, abandonment of children and grandchildren, and also, a legendary reputation of maltreatment of women.

Iyabo who forswore further political engagements in Nigeria denied any political motive for her missive, and described Nigeria as a country where her father and his ilk have helped to create a situation where smart, capable people bend down to imbeciles to survive. She particularly noted her experience as chairman of the Senate Committee on Health when she led the committee on a retreat appropriated for in the budget only for her to be prosecuted for it.

Iyabo, first child of the former president, started the letter titled, Open Letter to my Father with a 4th century Chinese proverb by Mencius which states: “The great man is he who does not lose his child’s heart.”

“It brings me no joy to have to write this but since you started this trend of open letters I thought I would follow suit since you don’t listen to anyone anyway. The only way to reach you may be to make the public aware of some things. As a child well brought up by my long-suffering mother in Yoruba tradition, I have been reluctant to tell the truth about you but as it seems you still continue to delude yourself about the kind of person you are and I think for posterity’s sake it is time to set the records straight.

“I will return to the issue of my long-suffering mother later in this letter.

“Like most Nigerians, I believe there are very enormous issues currently plaguing the country but I was surely surprised that you will be the one to publish such a treatise. I remember clearly as if it was yesterday the day I came over to Abuja from Abeokuta when I was Commissioner of Health in OgunState, specifically to ask you not to continue to pursue the third term issue.

“I had tried to bring it up when your sycophantic aides were present and they brushed my comments aside and as usual you listened to their self-serving counsel. For you to accuse someone else of what you so obviously practiced yourself tells of your narcissistic megalomaniac personality. Everyone around for even a few minutes knows that the only thing you respond to is praise and worship of you. People have learnt how to manipulate you by giving you what you crave. The only ones that can’t and will not stroke your ego are family members who you universally treat like shit (sic) apart from the few who have learned to manipulate you like others.

“Before I continue, Nigerians are people who see conspiracy and self-service in everything because I think they believe everyone is like them. This letter is not in support of President Jonathan or APC or any other group or person, but an outpouring from my soul to God. I don’t blame you for the many atrocities you have been able to get away with, Nigerians were your enablers every step of the way. People ultimately get leaders that reflect them.

“Getting back to the story, I made sure your aides were not around and brought up the issue, trying to deliver the presentation of the issue as I had practiced it in my head. I started with the fact that we copied the US constitution which has term limits of two terms for a President. As is your usual manner, you didn’t allow me to finish my thought process and listen to my point of view. Once I broached the subject you sat up and said that the US had no term limits in the past but that it had been introduced in the 1940s after the death of President Roosevelt, which is true.

I wanted to say to you: when you copy something you also copy the modifications based on the learning from the original; only a fool starts from scratch and does not base his decisions on the learning of others. In science, we use the modifications found by others long ago to the most recent, as the basis of new findings; not going back to discover and learn what others have learnt. Human knowledge and development and civilization will not have progressed if each new generation and society did not build on the knowledge of others before them.

“As usual in our conversations, I kept quiet because I know you well. You weren’t going to change your mind based on my intervention as you had already made up your mind on the persuasion of the minions working for you who were ripping the country blind. When I spoke to you, your outward attitude to the people of the country was that you were not interested in the third term and that it was others pushing it. Your statement to me that day proved to me that you were the brain behind the third term debacle. It is therefore outrageous that you accuse the current President of a similar two-facedness that you yourself used against the people of the country.

“I was on a plane trip between Abuja and Lagos around the time of the third term issue and I sat next to one of your sycophants on the plane. He told me: “Only Obasanjo can rule Nigeria”. I replied: “God has not created a country where only one person can rule. If only one person can rule Nigeria then the whole Nigeria project is not a viable one, as it will be a non-sustainable project”

“I don’t know how you came about Yar’Adua as the candidate for your party as it was not my priority or job. Unlike you, I focus on the issues I have been given responsibility over and not on the jobs of others. It was the day of the PDP Presidential Campaign in Abeokuta during the state-by-state tour of 2007 that Yar’Adua got sick and had to be flown abroad. The MKO Abiola Stadium was already filled with people by 9am when I drove by (and) we had told people based on the campaign schedule that the rally would start at noon.

At 11 am I headed for the stadium on foot; it was a short walk as there were so many cars already parked in and out. As I walked on with two other people, we saw crowds of people leaving the stadium. I recognized some of them as politicians and I asked them why people were leaving. They said the Presidential candidate had died. I was alarmed and shocked. I walked back home and received a call from a friend in Lagos who said the same and added that he had died in the plane carrying him abroad for treatment and that the plane was on its way to Katsina to bury him.

I called you, and told you the information and that the stadium was already half-empty. You told me to go to the stadium and tell the people on the podium to announce that the Presidential candidate had taken ill that morning but the rest of the team, including you and the Vice-Presidential candidate would arrive shortly. I did as I was told, but even the people on the podium at first didn’t make the announcement because they thought it was true that Yar’Adua had died. I had to take the microphone and make the announcement myself. It did little good. People kept trooping out of the stadium. Your team didn’t arrive until 4pm and by this time we had just a sprinkling of people left.

That evening after the disaster of a rally, you said you had insisted that the Presidential candidate fly to Germany for a check-up although you said he only had a cold. I asked why would anyone fly to Germany to treat a cold? And you said “I would rather die than have the man die at this time.” I thought of this profound statement as things later unfolded against me. Then I thought it a stupid statement but as usual I kept quiet, little did I know how your machinations for a person would be used against me. When Yar’Adua eventually died, you stayed alive, I would have expected you to jump into his grave.

I left Nigeria in 1989 right after youth service to study in the US and I visited in 1994 for a week and didn’t visit again until your inauguration in 1999. In between, you had been arrested by Abacha and jailed. We, your children, had no one who stood with us. Stella famously went around collecting money on your behalf but we had no one. We survived. I was the only one of the children working then as a post-doctoral fellow when I got the call from a friend informing me of your arrest.

A week before your arrest, you had called me from Denmark and I had told you that you should be careful that the government was very offended by some of your statements and actions and may be planning to arrest or kill you as was occurring to many at the time. The source of my information was my mother who, agitated, had called me, saying I should warn you as this was the rumour in the country. As usual you brushed aside my comments, shouting on the phone that they cannot try anything and you will do and say as you please. The consequence of your bravado is history.

We, your family, have borne the brunt of your direct cruelty and also suffered the consequences of your stupidity but got none of the benefits of your successes. Of course, anyone around you knows how little respect you have for your children.

You think our existence on earth is about you. By the way, how many are we? 19, 20, 21? Do you even know? In the last five years, how many of these children have you spoken to? How many grandchildren do you have and when did you last see each of them? As President you would listen to advice of people that never finished high school who would say anything to keep having access to you so as to make money over your children who loved you and genuinely wished you well.

“At your first inauguration in 1999, I and my brothers and sisters told you we were coming from the US. As is usual with you, you made no arrangements for our trip, instead our mom organized to meet each of us and provided accommodation. At the actual swearing-in at Eagle Square, the others decided to watch it on TV. Instead I went to the square and I was pushed and tossed by the crowd.

I managed to get in front of the crowd where I waved and shouted at you as you and General Abdulsalam Abubakar walked past to go back to the VIP seating area. I saw you mouth ‘my daughter’ to General Abdullahi who was the one who pulled me out of the crowd and gave me a seat. As I looked around I saw Stella and Stella’s family prominently seated but none of your children. I am sure General Abdullahi would remember this incident and I am eternally grateful to him.