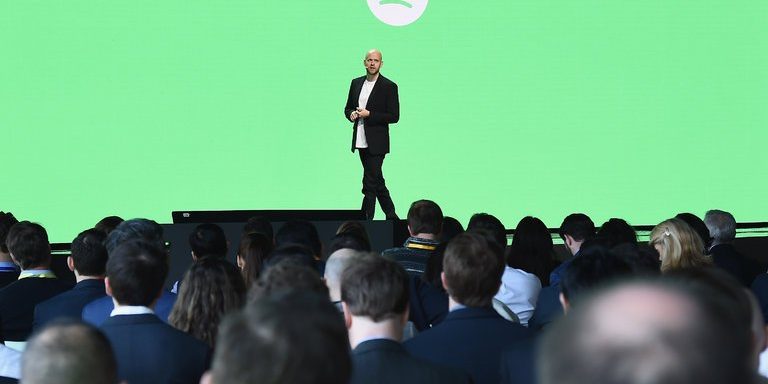 • Spotify’s shares will begin trading on the Big Board today.

• If the markets fall again, we have some possible explanations.

Get this in your inbox each morning. Sign up here.

Spotify hopes its shares won’t jump too much today

It’s not going to be like a traditional listing, where companies ring a bell and make a huge fuss. Spotify is particularly keen to avoid another trope of successful I.P.O.s: a big “pop” in its share price on Day 1.

Alex Barinka of Bloomberg explains how the company has set up its direct listing:

With Spotify, there’s no predetermined supply and the company isn’t selling in the offering. The company’s advisers have had to work a long list of existing investors to try to discern whether they might sell and at what price — with no guarantee that they won’t change their minds. Those conversations with investors — venture capitalists, institutional investors and family offices — took more than six weeks, the people said.

That also means the banks advising Spotify can’t prop up the stock price if it begins to fall. Daniel Ek, the co-founder and C.E.O., is striking a philosophical pose: “Sometimes we succeed, sometimes we stumble.”

If all goes well: Spotify expects its shares to trade at a $25 billion valuation on the Big Board.

What’s behind the market slump?

S.&P. 500 futures are up this morning, suggesting yesterday’s market rout may not continue. And European and Asian markets didn’t fall as sharply as did the U.S.’s. But what’s behind the markets dropping 4 percent so far this year? A couple of ideas:

• Tech, again: The FAANG stocks are still weighing down the S.&P. 500 and the Nasdaq, as the likes of Facebook and Google face the prospect of greater regulation and President Trump repeats his attacks on Amazon. (Tesla was down, too, but that’s more understandable.)

Peter Eavis’s take: Before investors began fretting about tech and trade, the underpinnings of the stock market’s ascent were perhaps not as robust as they looked. Analysts expect S.&P. 500 companies’ earnings to grow 25 percent this year. But rising interest rates worldwide could affect revenue growth. And if wages and other costs come in higher than expected, profit margins could get squeezed.

The bottom line: Uncertainty has descended upon the markets, and it will be hard to shake off.

How a ‘Why Me?’ button could help fix Facebook

In his latest column, Andrew suggests a way the company could make its practices more transparent — one that Google and Amazon could consider, while we’re at it: a button next to every ad and piece of content that would explain why a user is seeing it.

The “Why Me?” button might create all sorts of problems for Facebook, and its advertisers, too. It would allow users — and rivals — to reverse engineer much of the way the system works. And advertisers would probably object to the idea of making their targeting plans public. But that would be the cost of using such large public platforms with such exact targeting.

Elsewhere in data privacy: Beijing and other governments are figuring out what data regulation means for A.I. And Grindr, the gay dating app, has stopped sharing users’ HIV statuses after a BuzzFeed exposé.

• Amazon has visited more than half the cities shortlisted for its second headquarters, unnamed sources said, and the rest are scrambling for tips on their itineraries. (WSJ)

• Walmart is partnering with MoneyGram on a global remittance service, Walmart2World. (CNBC)

• Apple reportedly aims to start replacing Intel chips in iMacs with its own from 2020. (Bloomberg)

• Federal authorities arrested two founders of Centra, a virtual currency endorsed by Floyd Mayweather, and accused them of fraud. Shares in Monex Group rose after reports that it might buy the troubled cryptocurrency exchange Coincheck. And researchers suggest a new way to value Bitcoin (they say it’s overpriced).

In offering to buy Sky News outright, Walt Disney is hoping to finally win regulatory approval for Fox’s bid to buy the 61 percent of Sky that it doesn’t already own. (Fox itself has proposed making Sky News fully separate, giving it an independent board and funding it for 15 years.)

The bottom line: Disney wants Fox to have full control of Sky to support its $52.4 billion deal to buy most of Fox, and it wants to get ahead of Comcast’s rival effort to buy that 39 percent of the British broadcaster.

Elsewhere in deals: Harbor Energy has offered more than $10 billion to buy Santos, the Australian natural-gas driller. Why Sumner Redstone won’t have the last word on merging CBS and Viacom. Walmart is reportedly in talks to buy PillPack, an online pharmacy start-up. G.E. will sell part of its health care info-tech business to Veritas Capital for $1.05 billion. And GreenSky, an online lender to customers of retailers like Home Depot, has reportedly filed for an I.P.O.

• The E.P.A. has challenged California’s car emission standards, while the Justice Department has sued the state over a newly passed state law governing land use.

• The White House nominated Justin Muzinich, an architect of the Republican tax overhaul, to be Steven Mnuchin’s deputy at the Treasury. (NYT)

• New York State may offer its own retirement fund for private-sector workers. (NYT)

• Meet Brian Ballard, one of Washington’s most powerful lobbyists. (Politico)

• John Thain is reportedly set to join Deutsche Bank’s supervisory board as part of a broader reshuffle. (Bloomberg)

• John Giannandrea will step down as head of search and A.I. at Google. Ben Gomes will take over the search unit and Jeff Dean will lead the A.I. division. (The Information)

• Three directors — Jim Messina, Jim Rosenthal and Peter Diamandis — have stepped down from Virgin Hyperloop One’s board. A fourth, Ziyavudin Magomedov, was arrested in Moscow on fraud charges unrelated to the transport company. (Bloomberg)

• Adam Metz, the Carlyle Group’s head of international real estate, and Jason Lee, the firm’s head of Asia real estate, have left the firm or will depart soon, according to unnamed sources. (Bloomberg)

• A celebrity jeweler, Nirav Modi, is on the run amid accusations that he accumulated almost $3 billion illegally, most of it from India’s state-run banks. (NYT)

• Mario Batali, who vanished from television and daily operations in his restaurant empire after accusations of misconduct, is eyeing a comeback. (NYT)

• Iftikar Ahmed was found liable for defrauding the venture firm Oak Investment Partners, where he was a general partner. (Axios)

• Private capital markets have become the most popular way to raise money in the U.S., raising concerns about oversight and concentration of power. (WSJ)

• A writer at Splinter reflects on what private equity has meant for his publisher, Univision. (Splinter)

• Michael Liberty has been accused by the S.E.C. of looting Mozido, the fintech company he founded, for tens of millions of dollars. (WSJ)