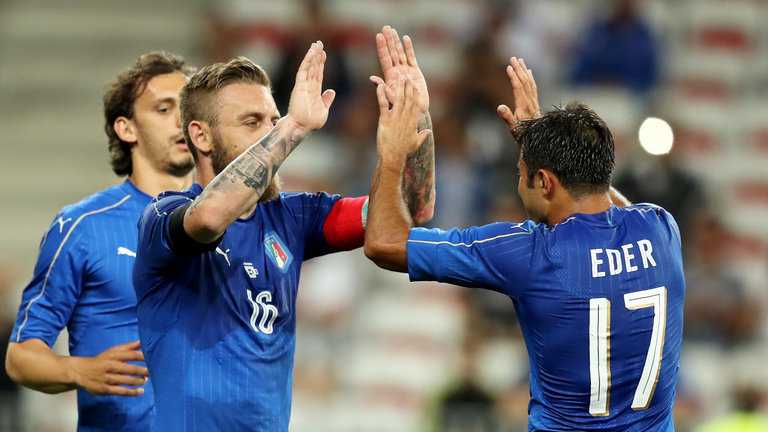 Italy capitalised on a calamitous night for Uruguay defender Jose Gimenez as they strolled to a 3-0 friendly victory on Wednesday.

The Atletico Madrid defender scored a bizarre own goal just seven minutes into the contest in Nice and then, after Eder’s late strike doubled Italy’s lead, Gimenez gave away a stoppage-time penalty to allow Daniele De Rossi to add a third.

Many a striker would have been proud of Gimenez’s seventh-minute finish, but unfortunately for the 22-year-old he was trying to dispossess Andrea Belotti when he sent the ball curling into the far corner of his own net.

Italy laboured to add to their lead, but after Eder’s 82nd-minute goal made sure of the win, Gimenez brought down Stephan El Shaarawy in the area to complete a miserable evening.

Belotti played a huge role in the opening goal, taking down a long ball from Lorenzo Insigne on his chest and stealing a march on the defenders with his turn.

Gimenez reacted desperately, but as he tried to clear the danger he instead caught the ball with the outside of his boot, sending it curling inside the post as goalkeeper Fernando Muslera was left helpless.

It was a stroke of fortune but though Italy laboured to add to it before a late flurry, they will feel they were comfortably deserving of the win as they created the better chances throughout the match.

Muslera was required to make a series of saves, denying Belotti and Insigne in the early going.

There was a setback for the hosts in the 18th minute when Juventus midfielder Claudio Marchisio was forced off with an injury, with Riccardo Montolivo replacing him.

After the frantic opening, the chances dried up, with Insigne, De Rossi and Antonio Candreva off target with the only openings that came Italy’s way before the break.

The second half was a fairly poor affair with chances few and far between at either end.

Italy continued to have the better of what there was, but Montolivo and Eder were both wayward with chances before El Shaarawy brought a save from the goalkeeper with an attempt from outside the area.

A string of substitutions disrupted the flow but Italy kept pushing and finally got their reward in the 82nd minute when Eder doubled the lead with a close-range finish – turning home El Shaarawy’s ball as Uruguay appealed in vain for offside.

Uruguay heads dropped and Federico Bernardeschi, Eder and Montolivo had chances to add to the score before Gimenez’s night got worse in time added on.

He slid in on El Shaaraway, allowing De Rossi to turn it into a comfortable night for Italy, who will now go into Sunday’s crucial World Cup Qualifier against Liechtenstein on a high.