IT’S TIME FOR THE IGBO (BIAFRANS) TO GO BACK TO THEIR LAND. 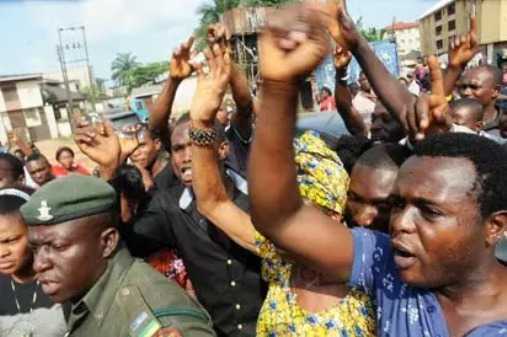 Scores of Igbo shop owners on Secretariat Road, Ado Ekiti, the Ekiti State capital, yesterday protested what they called “outrageous taxes” imposed on them by the Ayo Fayose administration.Over 100 shops belonging to Igbo traders, Zenith and Diamond banks and NNPC mega filling station were shut by officials of the Board of Internal Revenue (BIR) in an operation that began at 9am.

The traders marched from their shops to the BIR headquarters opposite Old Governor’s Office and sang songs such as “We no go gree o, we no go gree”, among others. Frightened BIR workers shut their doors on the protesters and didn’t open them until the 4pm closing time. Special Adviser to the Governor on Revenue Ropo Ogunjobi was not at his desk when the protesters invaded the BIR headquarters.

The traders claimed that they entered into an agreement with BIR for a tax rate of N5,500 but officials of the tax agency visited their business offices yesterday morning claiming the agreed tax no longer subsists.Chairman of Secretariat Road Traders Association Uchenna Madunagu claimed that BIR imposed taxes ranging between N75,000 and N180,000 on the traders, which he said are too much for their businesses.

Madunagu said the traders were forced out of their shops by stern-looking armed policemen, civil defence officers and suspected thugs clutching chains and padlocks.The traders’ boss claimed that most of the traders still had cash, passbooks, cheques and keys to their homes inside the shops.Madunagu said: “The newly imposed taxes have no basis anywhere because a tax is supposed to be based on your income and you don’t do assessment of taxes in your room, you have to come to our shops and see the business we run.“You don’t have to send hoodlums and thugs to close our shops.
Imagine a shop that the goods inside is not up to N200,000 being asked to pay N100,000.

“The most painful part is that we entered into an agreement with the tax people and they gave us a bill of N5,500 and as the chairman, I told my members because things are difficult in Ekiti and Nigeria now.“We came to their office based on the agreement of N5,500 only for them to tell us that the one we agreed upon is no longer valid that they are coming up with new taxes.“They came with keys, chains and other things and used force to intimidate us. Why should shop owners in Ajilosun be paying N3,500 and those in Fajuyi be paying N5,500 and those of us on
Secretariat Road be paying between N75,000 and N180,000?

“We have been paying taxes every year, not that we don’t want to pay but this latest tax regime is unbearable and their approach is selective because we contribute much to commerce and economy in Ekiti.“Most of our belongings such as keys to our houses, cash, cheque books, passbooks and other valuables have been locked inside by the government agents.“They should open our shops and listen to us, we are citizens of this country and we should not be marginalised because we are contributing between 80 and 90 per cent to the economy in Ekiti.”Secretary of the association Chizom Unegbu urged Fayose to reduce the taxes, saying there should be no selective application of taxes in the state.

Ogunjobi said the question of the traders paying N5,500 never emanated from his office.He said: “Those traders are lying. The N5,500 they are talking about is not from this office because what we are talking about now is the Personal Income Tax.“We have assessed them, they should go and collect the assessment notice and go to the bank and pay their taxes.” Diamond bank was said to be owing operational tax which used to be N10,000 in the past but has been jerked up to N120,000.

A source said the tax has been paid after which the bank was reopened, meaning that its doors will be opened to customers today