“It is a Muslim ban” 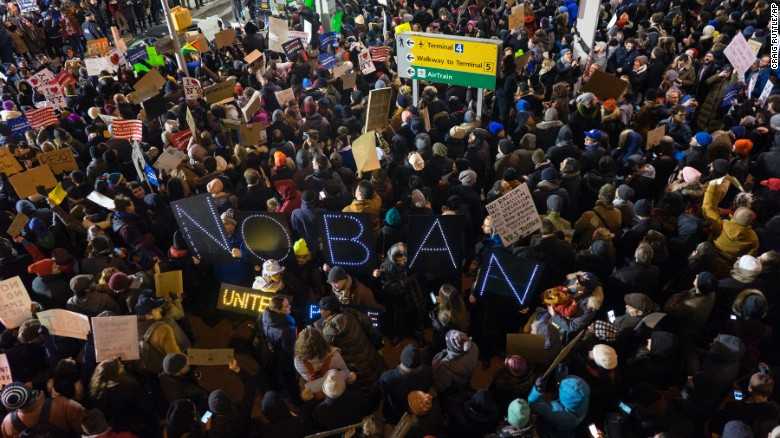 Reza Aslan is the author of “Zealot: The Life and Times of Jesus of Nazareth” and the host of CNN’s new original series “Believer With Reza Aslan,” which premieres at 10 p.m. ET March 5. The views expressed are his own.

(CNN)Donald Trump released a statement Sunday afternoon in response to the massive protests that have erupted across the country in response to his latest executive order freezing all refugees from Syria and banning entry to foreign nationals from seven Muslim-majority countries.

“To be clear,” the statement read, “this is not a Muslim ban, as the media is falsely reporting. This is not about religion – this is about terror and keeping our country safe.”

As we have come to expect from Donald Trump, nearly every word of that sentence is false. It is a Muslim ban. Rudy Giuliani admitted as much in talking about its origins on Fox News. “I’ll tell you the whole story,” he said. “So, when [Trump] announced it he said “Muslim ban.” He called me up, he said, ‘Put a commission together. Show me the right way to do it legally.'” It is about religion. Trump said so on Christian Broadcast Network when he vowed that he would allow Christians to enter from the banned countries list but not Muslims. “If you were a Muslim, you could come in,” Trump said, “but if you were a Christian, it was almost impossible,” Trump said of our refugee system. This is, of course, another lie. According to the Pew Research Center, in 2016 the United States brought in 37,521 Christian refugees and 38,901 Muslims refugees. Read More It is not about terror.There is no great fear of terrorism from refugees. Of the 784,000 refugees resettled in the United States over the last 15 years, exactly three have been arrested for planning terrorist activities, according to a Cato Institute report by Alex Nowrasteh. Of the 3,252,493 refugees admitted into the country from 1975 to 2016, 20 of them took part in terrorism. That’s 0.00062%. Of those 20, three were successful in actually carrying out the terror attack. Those three attacks killed a total of three people. In fact, the likelihood of being killed in a terrorist attack perpetrated by an immigrant is 1 in 3.6 million, and that includes the total deaths in the attacks of 9/11. This is not about keeping our country safe. Between 1975 and 2016, exactly zero Americans were killed on US soil by foreign nationals from any of the seven countries in Trump’s banned list. However, the ban does include our most vital ally in the fight against ISIS, Iraq. That country has now threatened to retaliate against the executive order by banning US nationals from entering Iraq, putting America’s war against ISIS in great peril. As the former counterterrorism official Daniel Benjamin put it, “For the life of me, I don’t see why we would want to alienate the Iraqis when they are the ground force against ISIS.” So, to be clear, this is a Muslim ban. It is about religion. It is not about terror. And it does not keep our country safe.