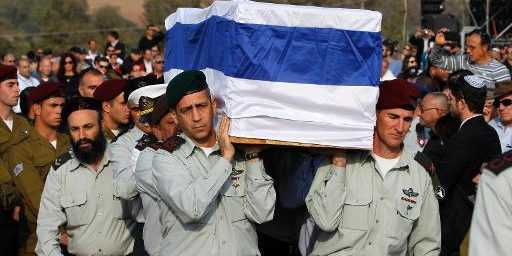 Sycamore Ranch (Israel) (AFP) – Ariel Sharon, one of Israel’s most controversial leaders, was laid to rest Monday at his family ranch in a sombre

ceremony attended by Israeli officials and foreign dignitaries.
On a hilltop overlooking the ranch surrounded by palm trees and sheep, hundreds also watched on giant television screens as Sharon’s coffin was lowered into the ground, ending a major chapter in the Jewish state’s history.

Bedouin Arabs and Orthodox Jews were among those bidding farewell to the former premier, who died on Saturday after eight years in a coma brought on by a massive stroke.

For Yoram Ravid, his former legal adviser and friend, “Sharon will remain first and foremost as a war hero.”

Sharon, a farmer-turned-fighter who fought in all of Israel’s major wars before turning to politics, lived a ruthlessly uncompromising life which saw him both hailed as a hero and cursed as a war criminal.

The burly 85-year-old was laid to rest in the soil he loved so much just a few kilometres (miles) from the Gaza Strip, the scene of one of his last and most daring political acts.

It was Sharon’s evacuation of all troops and Jewish settlers from Gaza in 2005 that rewrote much of the ex-general’s history, turning former rightwing allies into enemies and forcing world leaders to recast him as a peacemaker.

But for the Palestinians and the Arab world, Sharon remained a warmonger with blood on his hands.

“The land from which you came will embrace you in the warm arms of the history of our nation to which you added an unforgettable chapter,” Israeli President Shimon Peres told an open-air memorial service in Jerusalem before the funeral.

Under cloudless skies, a string Israeli leaders and foreign dignitaries eulogised Sharon for his military prowess, his lifelong defence of Israel’s security, and his political courage.

Wearing a black Jewish skullcap as he addressed mourners, US Vice President Joe Biden remembered Sharon as a “historic leader” whose guiding star was “the survival of the state of Israel and the Jewish people”.

“Prime Minister Sharon was a complex man… (who) lived in a complex time in a complex neighbourhood,” said Biden, hailing him for his military and political courage in pushing through Israel’s withdrawal from Gaza.

Prime Minister Benjamin Netanyahu, like many who bitterly opposed the Gaza withdrawal, focused instead on Sharon’s “unique contribution” to Israel’s security, describing him as “one of (Israel’s) greatest military leaders” who had “reintroduced the legacy of Jewish bravery into the Land of Israel”.

After the service, the coffin was taken briefly to a military memorial site in Latrun on the Jerusalem-Tel Aviv road, where Sharon was wounded in the 1948 war of independence, before ending its journey in Sycamore Ranch in the Negev desert.

There, eight generals carried Sharon’s casket to a hillside and lowered it into a plot next to the grave of his second wife Lily, removing the blue and white Israeli flag before covering it with soil.

A rabbi then went up to Sharon’s two sons and made a symbolic cut in their shirts as a sign of mourning.

“Arik, the commander. You had many titles over the years, but I think this is the one that suited you most,” Chief of Staff Lieutenant General Benny Gantz said at the graveside.

Meeting Peres for talks in Jerusalem later, Biden remembered how Sharon had led the fight in the early years of the state and “changed the circumstances” to the point that Israel was no longer “in physical jeopardy of being overwhelmed”.

Just an hour after the end of the funeral, two rockets from Gaza struck an area only a few kilometres away, causing no injury or damage, the army said.

Given the ranch’s proximity to Gaza, Israeli police and the army had beefed up security.

Unconfirmed media reports said the army had deployed a battery of the Iron Dome missile defence system to counter any rocket attacks.

The Israeli military responded with two air raids on the central and southern parts of the Hamas-run Palestinian territory.

Once known chiefly as a ruthless military leader, Sharon switched to politics in 1973, championing the development of Jewish settlements in the occupied Palestinian territories.

He was long considered a pariah for his personal but “indirect” responsibility in the 1982 massacre of hundreds of Palestinians by Israel’s Lebanese Phalangist allies in Beirut’s Sabra and Shatila refugee camps.

Sharon surprised both friends and foes alike by masterminding the evacuation of all troops and 8,000 settlers from Gaza.

Although many of his former rightwing allies have never forgiven him, Zeev Hever, a veteran settler leader who spoke at the memorial, hailed the many years Sharon had fought to build up the settlements.

“You taught the Jewish people how to fight and then how to settle,” he said, describing him as “the father of the settlement movement”.

“Your disengagement from our shared path… was difficult and painful. The questions remain unanswered, the pain is great, but a deep love covers everything.”