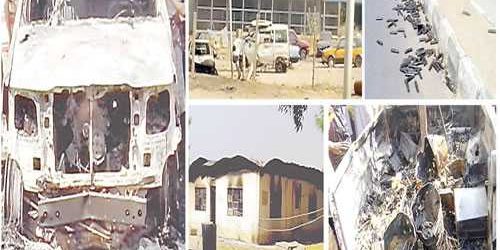 FOLLOWING the Boko Haram attack on the Nigeria Air Force (NAF) base in Borno State, it has been revealed that military ambulance made seven trips taking corpses to undisclosed hospitals within Maiduguri.

Fighting had erupted in the early hours of Monday at about 2.45 a.m between suspected members of Boko Haram insurgents and troops when the gunmen attacked the NAF base, also known as 79 Composite Group and burnt down three military helicopters.

Although the media was denied entrance, when the state governor, Kashim Shettima, visited the base, credible sources told newsmen that the attack was the worst in recent times.

Sources also said there was an intelligence report about the attack three days ago, when a member of the Boko Haram sect was arrested in Maiduguri, but the report was not taken with the required attention.

According to sources, the gunmen came in 23 Hilux vehicles to wreak havoc and left with many security vehicles.

“They went away with some security vehicles belonging to SSS at the 333 artillery,” one of the sources said.

Confirming the incident in a report issued by the Director, Defence Information, Brigadier-General Chris Olukolade, the military stated that military locations such as NAF base and some Nigerian Army locations in Maiduguri were targeted during the attack.

According to him, 24 insurgents were killed, while two Air Force personnel were wounded during the exchange of fire.

He said three decommissioned military aircraft, as well as two helicopters were incapacitated in the course of the attack.

He stated that security forces were in pursuit of the terrorists in the Djemtillo general area, on the Maiduguri/Banishek axis.

The defence spokesman disclosed that movements in Maiduguri and environs had been restricted, while citizens were enjoined to report any of the fleeing insurgents, most of whom could be identified with gunshot wounds whenever they were sighted.

Reacting to the development, Borno State government and the 7 Division of Nigerian Army have imposed a 24-hour curfew in Maiduguri, the state capital, following the attack.

A statement by the Secretary to the State Government, Ambassador Ahmad Jiddah, said the curfew took effect from 11.00 a.m. on Monday and appealed to residents to remain calm until situation was brought under control.

The statement added that vehicles on emergency calls and essential services would, however, be allowed during the period.

It also said the curfew would be lifted as soon as the situation improves.

Meanwhile, normal flights operations to and from the Maiduguri Airport, which were earlier temporarily disrupted, has resumed.

However, Nigerian Tribune gathered from authoritative military sources that the decommissioned aircraft were MIG 21 that had earlier been marked for Nigerian Airforce museum in Abuja.

Maiduguri airport not bombed by Boko Haram —FAAN spokesman
The Federal Airports Authority of Nigeria (FAAN), on Monday, said the December 2 attack in some parts of Maiduguri by suspected Boko Haram members did not affect the Maiduguri International Airport.

Mr Yakubu Dati, the Authority’s General Manager, Corporate Communications, said this in a telephone interview with the News Agency of Nigeria (NAN) in Lagos.

He said the attack only affected some areas around the vicinity of the airport.

“There was no bombing at the Maiduguri Airport, but it only happened around the airport vicinity.

“The airport has been closed for flights, and relevant security situation are on the ground to take full charge,” Dati said.

Aircraft insurance premium may go up
Information gathered on Monday indicated that most of the airlines operating in the troubled areas in the northern part of the country may review their flight activities, for the fear of the aircraft being attacked in the face of the Boko Haram onslaught.

This came as the Murtala Muhammed Airport was, on Monday, thrown into confusion when news filtered in that Boko Haram had attacked the Maiduguri airport.

The news, which created tension among key players in the industry, threw everyone off balance, following the rumour that the sect did not only attack the Air Force base and the airport, but also set two aircraft ablaze.

The news sent fears down the spines of many domestic airline operators who believed that if it was true that two aircraft were torched by the sect, the development may have put a question mark on the safety of other aircraft flying around the country’s airports.

An airline chief, who spoke to the Nigerian Tribune on condition of anonymity, said with the attack on the Air Force base at the airport, any airline flying into the airport henceforth may be seen by the insurer as operating under high risk, which subsequently attracts high premium.