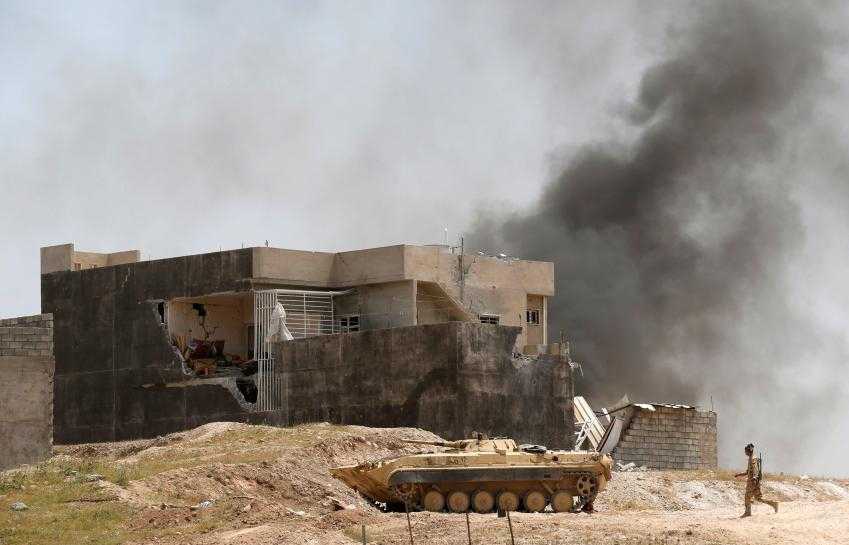 BAGHDAD Iraqi forces faced stiff resistance from Islamic State in northwest Mosul on Sunday after opening a new front against the militants there in a push to rout them from the city after seven months of fighting.

Trapped in a steadily shrinking area of the city, the militants are fighting back with a barrage of suicide car bombs and snipers concealed amongst hundreds of thousands of civilians they are effectively holding hostage.

Having gained a foothold in the northern Musherfa district last week, Iraqi forces are trying to push down into the handful of remaining districts held by Islamic State in Mosul, including the Old City.

The Iraqi military said on Saturday the Musherfa district had been fully retaken, but officers told Reuters on Sunday there was still fighting there and smoke could be seen rising over the area by a Reuters reporter in east Mosul.

“Fighting Daesh in Musherfa with a large number of families still locked in their houses is making the battle more complicated,” said a colonel from the ninth armored division, which is taking part in the offensive, referring to Islamic State by its Arab acronym.

The new push from the northwest began last week after other fronts in the city’s southern districts stalled around the Old City where the iconic mosque from which Islamic State leader proclaimed a modern-day caliphate is located.

Iraqi forces are backed by a U.S.-led coalition which is carrying out airstrikes and advising them on the ground.

Iraqi officers said additional reinforcements from the Rapid Response Division had arrived in northwest Mosul on Sunday to help clear areas on the banks of the River Tigris that bisects the city.

“The brigade will participate in the battle to retake Hawi al-Kanisa and also help the ninth army division step up pressure on Daesh fighters,” said a Rapid Response officer on condition of anonymity.