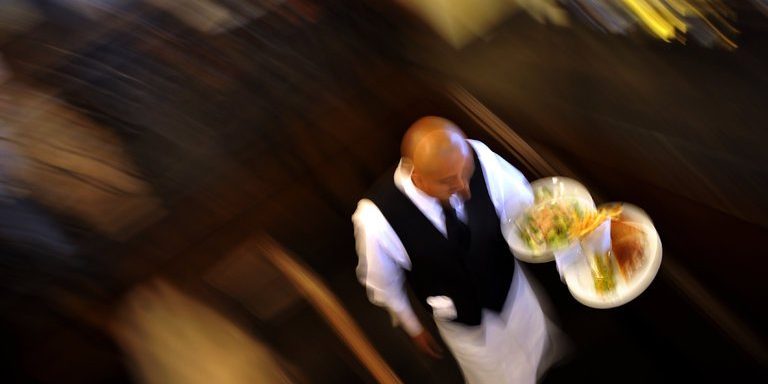 In the 1985 movie “European Vacation,” Chevy Chase and his family meet a Parisian garçon who, after insulting the brood, offers them dishwater to drink.

And who can forget the scene from Monty Python’s “The Meaning of Life” when a French waiter, faced with his unfulfilling existence, swears at the camera then turns for home?

Well, in Canada recently, Guillaume Rey, a waiter at Milestones Bar + Grill in Vancouver, British Columbia, filed a complaint against the restaurant’s parent company, Cara Operations, after he was fired for being combative, aggressive and something of a bully. His defense? He’s not rude, he contends. Instead, he’s French and his former bosses are discriminating against his culture and heritage.

The argument is a novel one, but with enough traction that one member of the British Columbia Human Rights Tribunal who reviewed the complaint agreed that Mr. Rey deserves a hearing. Devyn Cousineau wrote in her March 7 decision that Mr. Rey would have to provide “evidence about what exactly the stereotype is with respect to people from France.”

Even the French have agreed in the past that their service workers could use an attitude adjustment. In 2013, the Paris tourism board and local chamber of commerce collaborated on an ad campaign to encourage waiters, taxi drivers and others to be more polite to international guests.

They created a website and a six-page booklet, “Do You Speak Touriste?,” which included helpful tidbits: British guests like to be addressed by their first names; Americans eat dinner at 6 p.m. and spend a lot of time on their cellphones.

“The line that ‘I am French so I am rude,’ well, that is not a defense,” said Edith Boncompain, the vice president for education at the French Institute Alliance Française in New York.

She was born in Lyon and lived in Paris for four years. “I’ve never noticed people being rude to me,” she said.

According to the complaint, which made headlines this week, Mr. Rey is from France and began working at Milestones in October 2015. When he was hired, he signed a letter acknowledging that being rude to a guest or co-worker would be grounds for dismissal.

Neither Mr. Rey nor Cara Operations returned calls seeking comment. But in the complaint, Mr. Rey’s bosses contend that, while he was well-liked by guests and good at his job, he was told in April 2017 to watch his temper.

Three months later, in July, he “was directed not to have any more fights with staff or management.”

By August, his relationships at the restaurant had deteriorated. A co-worker got into an argument with Mr. Rey and claimed this caused him to “have issues with his anxiety.” Mr. Rey was fired soon after.

Mr. Rey contended in the filing that he was fired because of his “direct, honest and professional personality” and his high standards, which he learned in the French hospitality industry.

It didn’t take long for some writers to come to Mr. Rey’s defense. Indeed, there is a history of extolling the virtues of snobbery among French waiters.

The Wall Street Journal proclaimed in 2015 that despite being inflexible and brutish, “the French waiter still provokes gasps of admiration from those who appreciate his singular style.”

Anthony Peregrine, who covers travel for The Telegraph and lives in France, wrote this week that Mr. Rey was only doing his job. He described hospitality in Britain and other English-speaking countries as “soppy.”(Never mind that whole swaths of Canada are heavily influenced by French culture.)

“The fact is that we, in Britain and our former colonies, don’t take waiting seriously,” Mr. Peregrine wrote. “It’s what we do before something proper turns up.”

Mr. Rey, he insisted, was merely being himself.

“It wasn’t his fault that they couldn’t cope with his higher standards,” he wrote.

Even so, Ms. Boncompain said that Parisians, in particular, had become more welcoming in recent years, allaying the concerns of travelers and international guests.

“They are reassuring,” she said of stereotypes. “That is why they persist. But you don’t have to really get to know a person, understand them, if you rely on a stereotype.”