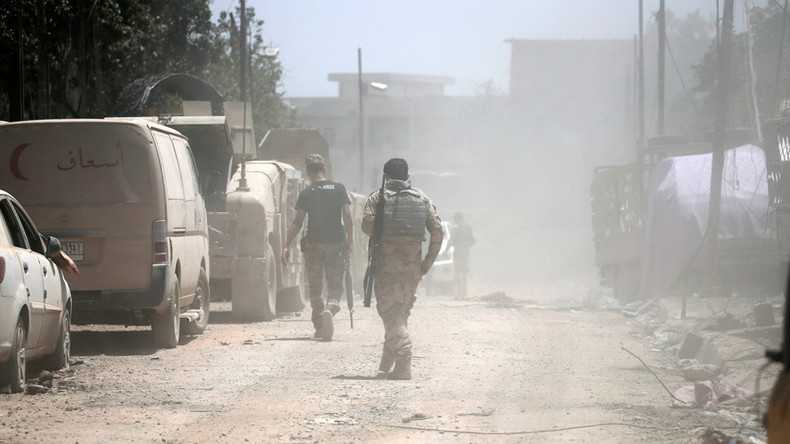 Iraqi special forces, as well as the regular army and Federal Police, are participating in the operation that began on Sunday, according to Lieutenant General Abdul-Amir Rasheed Yar Allah, as cited by AP.

Some 150,000 civilians are believed to be trapped inside west Mosul’s Old City, where the terrorists intend to use them as human shields, according to UN deputy special representative and humanitarian coordinator in Iraq Lise Grande, who spoke to AP on Friday.

She described the civilians’ plight as “desperate,” as there is almost no food or water in the area.

Mosul was captured by Islamic State (IS, formerly ISIS/ISIL) back in 2014, after which it became the terrorist group’s main stronghold in Iraq.

The attempt to drive IS out of their last hub in Mosul comes during the ninth month of the Iraqi troops’ offensive to re-capture the war-ravaged city.

The operation in Mosul has been marred by a massive civilian death toll.

Only a few days ago, RT’s Ruptly video agency spoke with witnesses of a May 31 airstrike on the city’s Zanjili district, where survivors said entire families had died in the strike.

While the UN stopped short of casting blame on the US-led coalition, saying that they are looking into the matter, it did urge the Iraqi forces and their coalition partners to “ensure that their operations comply fully with international humanitarian law and that all possible measures are taken to avoid the loss of civilian lives.”

Iraqi state TV aired live footage on Sunday showing black smoke rising from the Old City to the sound of gunfire, AP reported. The local station’s report said that leaflets have been handed out calling on civilians to leave through five corridors.

Chief of Iraqi special forces General Abdel Ghani al-Asadi told state TV that the terrorists may put up a “vicious and tough fight.”

“The United Nations has estimated that 200,000 civilians remain in the two-square-kilometer area in west Mosul’s Old City, which Iraqi and US-led coalition forces are encircling in preparation for the battle there,” said a joint statement from the six prominent human rights organizations.

In particular, Lama Fakih, deputy Middle East director at Human Rights Watch, expressed concern about “thousands of families trapped by ISIS in west Mosul, with its fighters preventing civilians from fleeing to safety.”

Fakih urged the Iraqi forces and their coalition partners to “recognize that in the crowded Old City, using explosive weapons with wide area effects puts civilians at excessive risk.”