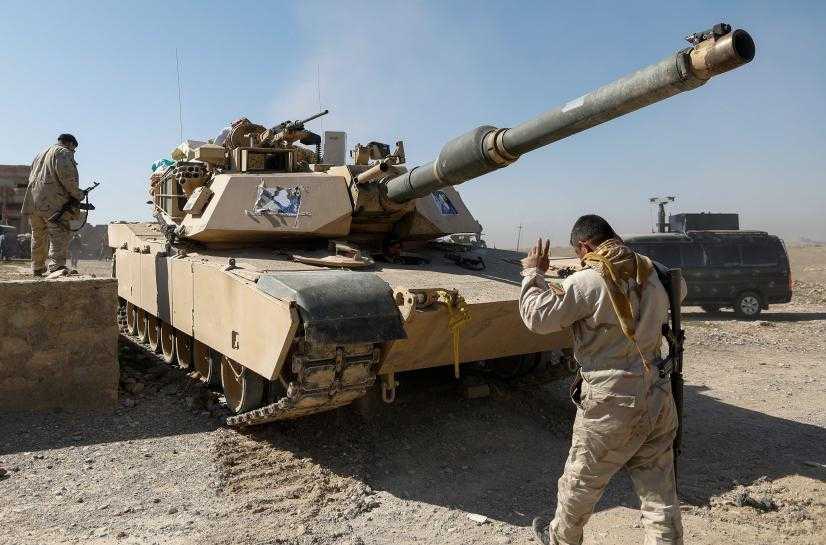 SOUTH OF MOSUL, Iraq/BAGHDAD U.S.-backed Iraqi forces closing in on the Islamic State-held western half of Mosul prepared on Tuesday to storm the airport and a nearby military base on its southern outskirts to create a bridgehead for a thrust into the city.

Since ousting the militant group from eastern Mosul last month, Iraqi forces have advanced in sparsely populated outlying areas but fighting will intensify as they near the teeming inner city of western Mosul and the risk to roughly 750,000 civilians there will rise.

The U.S. military commander in Iraq has said he believes

U.S.-backed forces will retake both of IS’s urban bastions – Mosul and Raqqa in neighboring Syria – within the next six months, which would end the jihadists’ ambitions to territorial rule three years after they declared a “caliphate”.

Iraqi federal police and elite interior ministry units known as Rapid Response have made rapid progress towards western Mosul in a sweep from the south through stony desert terrain since launching the offensive’s second phase on Sunday.

After fighting their way with helicopter gunships, machine gun fire and rocket-propelled grenades to Albu Saif on Monday, Iraqi forces were building up their positions in the hilltop village that overlooks the airport and built-up western Mosul beyond, a Reuters correspondent reported from the area.

The corpse of an Islamic State insurgent with a missing leg lay in the street of Albu Saif village.

Iraqi forces reached the “vicinity” of Mosul’s international airport on Monday, the military said. A Rapid Response spokesman said the airport, once retaken, would be a close-support base for the onslaught into the west of Iraq’s second-largest city.

Iraqi forces will also need to secure the Gozhlani military complex, which includes barracks and training grounds and sprawls across the area between the airport and the end of the Baghdad-Mosul highway.

A senior Iraqi official said the airport and Gozhlani base had been heavily damaged by U.S.-led air strikes to wear down IS militants ahead of the offensive. He said Iraqi forces did not anticipate much resistance at the airport or base especially as the area was exposed to air strikes and artillery bombardment.

“The next step, God willing, is to advance to the Ghozlani military base,” said Rapid Response Captain Mohammed Ali Mohsen, speaking inside a house where the IS slogan, “The Islamic State is Staying”, was scrawled in marker pen on the walls.

The Counter-Terrorism Service, Iraqi units trained by the United States for urban warfare and which spearheaded the recapture of east Mosul, are expected to surge into the city’s west once regular forces clear access points.

Iraqi commanders expect the battle to be more difficult than in the east of Mosul, however, in part because tanks and armored vehicles cannot pass through narrow alleyways that crisscross the city’s ancient western districts.

Militants have developed a network of passageways and

tunnels to enable them to hide and fight among civilians,

melt away after hit-and-run operations and track government

troop movements, according to inhabitants.

Townsend, told a news conference in Baghdad on Monday he had

been placing U.S. military advisers closer to front lines in

Davis said the Pentagon would present a preliminary plan for accelerating the fight against Islamic State to the White House early next week. He said the plan would look not only at Islamic State in Iraq and Syria but other areas where it has sprung up.

Islamic State is essentially under siege in western Mosul,

after being driven out of city districts east of the River Tigris after 100 days of heavy fighting ending in January.

IS has prevented residents from leaving but in the first two months of the Mosul campaign, in October and November, it forced thousands of villagers to march alongside its fleeing militants as human shields against air strikes.

“This is the grim choice for children in western Mosul right now: bombs, crossfire and hunger if they stay, or execution and snipers if they try to run,” the Save the Children humanitarian agency said in a statement. It added that children comprise about half the population in the city’s western sector.

Up to 400,000 civilians could be displaced by the offensive,

with western Mosul suffering food and fuel shortages and

markets closed, according to the United Nations.

Western Mosul contains the old city center, with its ancient

souks, government administration buildings and the mosque from

self-styled caliphate over parts of Syria and Iraq after shock territorial advances in 2014.

Mosul is the largest urban center captured by IS in either country. As in Syria’s Raqqa, it imposed a radical version of sharia law there, banning cigarettes, televisions and radios, and forcing men to grow beards and women to cover from head to toe. Citizens who failed to comply risked death.

Townsend has said he believes U.S.-backed forces will

recapture both Mosul and Syria’s Raqqa in Syria by mid-2017.

But even without notable territorial holdings, the resilient militants are likely to keep up a campaign of suicide bombings and inspiring lone-wolf attacks abroad.

Islamic State was thought to have up to 6,000 well-armed insurgents in Mosul when the government offensive started in mid-October. Of those, more than 1,000 have been killed, according to Iraqi military estimates.

Mobilization forces. They are now trying to sever the route linking Mosul to Tal Afar, a town under IS control 60 km (40

miles) to the west near the Syrian border.

The United States, which has deployed more than 5,000 troops

in the fighting, leads an international coalition providing air

and ground support to the Iraqi and Kurdish forces.

About 160,000 civilians have been displaced from the Mosul area since the start of the offensive, U.N. officials say. Medical and humanitarian agencies estimate the dead and wounded, civilian and military, total several thousand.