Cape Town -The Indigenous People of Biafra (Ipob) marched to Parliament on Tuesday to ask for help in securing the release of its leader Nnamdi Kanu, who is currently facing treason charges in a court in Abuja, Nigeria.

“We need people to be aware of the Biafran plight,” said Innocent Alia, Western Cape zonal co-ordinator of Ipob, while handing a petition over at the gates of South Africa’s Parliament during a polite protest.

He said South Africa, as a “leading light in democracy”, could help immensely in resolving the decades-old dispute which had led to the deaths of many people.

Ipob Western Cape spokesperson Gloria Alia explained that the strife in Biafra was a result of boundaries drawn by Britain as a colonial power, without regard for the preferences of people already living in the region.

When Britain withdrew from Nigeria in 1960, it left the colonial borders in place. A protracted civil war ensued between Biafra and the Nigerian government as Biafrans sought self-rule.

Biafra was reintergrated into Nigeria after the two-and-a-half-year conflict, during which an estimatedthree million civilians died in fighting and from starvation resulting from blockades.

Alia said that Biafrans, who are mostly Christian, were also being pressured to convert to Islam by supporters of predominantly Muslim Ariwa.

Ipob has launched a global campaign to put their campaign for self-determination on the world’s agenda and Tuesday’s march included dropping a petition off with British diplomatic representatives.

Kanu was arrested by the Federal Government of Nigeria in October 2015 for broadcasting his secessionist views on a radio station he directed, Radio Biafra.

The station operated out of the UK, but he was arrested while in Nigeria.

About 40 people attended the march, and the petition was accepted by a parliamentary representative, Peter Lebeko, who explained the lengthy process of tabling and considering a petition.

Alia said that Nigerian asylum seekers in South Africa were predominantly from Biafra and would return “in a heartbeat” if it were safe to do so. 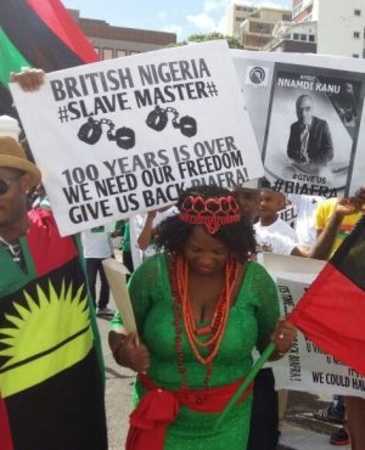