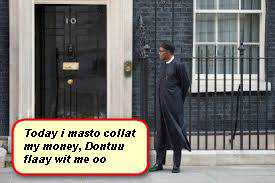 Since his forced entry into the Presidency of Nigeria in May 2015, Retired Major General Muhammadu Buhari has supervised the massacre of Biafrans in their thousands. Barely seven weeks into his tenure, Buhari bombed Biafraland with the internationally-banned NAPALM bombs leading to the death of hundreds of defenceless Biafrans. When Buhari is not snuffing lives out of unarmed and peaceful Biafrans, he is incacerating them and denying them access to basic information platforms.

Today, March 15, 2016 Buhari ordered his soldiers from 144 Battalion, Asa Ukwa West local council, Abia state to seize newspapers that have captions or stories related to Biafra. We are wondering how much low and absurd Buhari could get just to show that he relishes killing Biafrans and intimidating those who are lucky not to have been felled by his gun-toting  killer squads. What does Buhari want to achieve by seizing  newspapers that published Biafra stories? Which part of the 1999 Constitution is Buhari enforcing by this dastardly act? Is Buhari aware that what he did today violates every aspect of Chapter IV of the 1999 Constitution of Nigeria? Does Buhari know that what he did today is in contravention of the Seventh Schedule of the 1999 Constitution and is a ground for impeachment? When will Buhari’s illiteracy-inspired insanity come to an end?

By confiscating newspapers, Buhari has taken his madness to another level. His despicable conduct today is another  evidence that the International Criminal Court shall consider when looking into the various crimes he has been committing. It is possible that Buhari is willingly working himself into the prison yard in The Hague. Notwithstanding, the international community must caution Buhari and stop him in his tracks. The world must not wait until Buhari commits his second Owerri-like genocide before taking action.