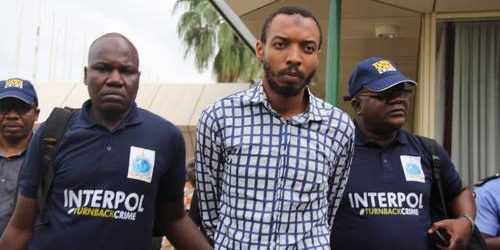 Ogwuche, a high-profile terror suspect, had fled to the Republic of the Sudan after the April 14 and May 1 bombings in Nyanya, Abuja.

He was subsequently declared wanted with a N15m bounty placed on him by security agencies.

Ogwuche was brought to the Presidential Wing of the Nnamdi Azikiwe Airport about 3pm where a full complement of security forces was awaiting his arrival.

He was brought in aboard a Nigerian Air Force, NAF, aircraft with registration 5N-FGX.

The terror suspect was flown into the country on a special flight from Khartoum, Sudan, and was handed over to the Interpol Unit of the Nigeria Police Force by the Sudanese authorities.

After undergoing some security procedures at the airport, Ogwuche was taken to a waiting white Toyota Hiace bus marked Abuja KWL 957 EW and driven out of the airport at 3:21pm in a convoy of security vehicles.

In a brief chat with journalists, the Coordinator, National Information Centre, who is also the Director- General, National Orientation Agency, NOA, Mr. Mike Omeri, said the suspect would be kept in custody and interrogated before being procecuted.

He attributed the extradition to the strong synergy among the nation’s security forces, assuring that the government would not abdicate its responsibility of securing the nation.

“We have just successfully being able to secure his extradition from Sudan and he is back in the country. Of course, the usual procedure will take place. He will be interrogated appropriately and charged to court when all the processes are concluded.

“The effort to get our (Chibok) girls back is the top priority of the Federal Government of Nigeria and we are working towards that,” he added.

The Nigeria Police Force Public Relations Officer, Mr. Frank Mba, said Ogwuche’s extradition followed the conclusion of a tortuous legal and diplomatic process between Nigeria and the Republic of Sudan.

Mba recalled that the terror fugitive had been arrested a while ago in Sudan following an international red notice issued for his arrest by the Nigeria National Bureau of Interpol.

He explained that the suspect had not been repatriated to the country before now due to some necessary processes involved in transferring suspects from one country to another.

He quoted the Inspector- General of Police, Mohammed Abubakar, as commending the personnel of the Nigeria Police Interpol Unit for a job well done. Mba noted that the successful repatriation of the terror fugitive to Nigeria showed that the global coalition against terrorism championed by Nigeria was yielding the desired results.

Ogwuche was arrested on May 14 in connection with the two bombings by Boko Haram in Nyanya, in which about 100 people were killed and hundred other injured.

The Federal Government had through Interpol issued an international arrest warrant for Ogwuche.

The suspect was a student of University of Glamorgan in Wales from 2007 till 2010 when he dropped out. He is the son of a retired colonel in the Nigerian Army, Col. Agene Ogwuche, while the suspect himself is a deserter from the Nigerian Army.

Security sources said while at the university in Britain, Ogwuche had described himself as “The Lion of God”, threatening to cut the hands and feet of non-believers.

The Directorate of State Security, DSS, also said the suspect had learnt Arabic at the International University of Africa in Sudan.

In early 2010, Ogwuche had gone on the social networking site, Facebook where he posted that: “Those who strive in the path of Allah love death like the kuffar (non-believer) love life, hahaha. Let them know, we are always ready to meet our Lord anytime he wills.”

Again in a Facebook post in 2011, he said: “The only punishment of those who wage war against Allah and His Messenger and strive to make mischief in the land is that they should be murdered, or crucified, or their hands and their feet should be cut off, or they should be imprisoned.”

Another of the posts said: “We warn you to give up your disobeyance (sic) to Allah and surrender to Him or wait we bring your humiliation then you will be regretful and on the knees.”

Ogwuche was first arrested in Nigeria in 2011 but released in 2012 following pressure from some human rights groups, who accused security forces of torturing him.

In a related development, the Nigeria Police Force yesterday announced the arrest of a high-profile terrorist, Mohammed Zakari, describing him as the “chief butcher” of the Boko Haram terrorists’ group.

According to the police, Zakari’s arrest followed the massive onslaught by security forces on the activities of the insurgent group, Boko Haram, at the Balmo Forest in Bauchi State.

He said the suspect was picked along Darazo-Basrika Road while fleeing the intensive counter-insurgency operations going on around the Balmo Forest.

“The suspect, who hails from Kaigamari Village, Daptchari in Darazo Local Government Area, Bauchi State, is the self-styled “chief butcher” of the insurgent group at the Balmo Forest Camp and is linked with the recent slaughter of seven people, including women and children,” Mba stated.

He said findings and disclosures from the suspect would assist the law enforcement agencies in tracking down some other members of the terror group.

Investigations revealed that the suspect was tutored in the art of insurgency at Gombe Forest under the leadership of a fleeing insurgent, Abba Taura, and moved to Balmo Forest only three months ago.

Zakari was discovered to have actively participated in the April attack on Customs officers at Kari Town, along Maiduguri Road, Bauchi State.

Meanwhile, the police high command has called on residents of the affected areas to be on guard for any suspicious or strange character fleeing from Balmo Forest.

It also called for the understanding and support of the public for the efforts of the police and other security forces in tackling insurgency.

Troops, had a few days ago, cleared and taken over Balmo Forest in an operation that lasted till the weekend.

Prior to the operation, Balmo Forest, stretching from Bauchi through Jigawa states with links to the fringes of Sambisa Forest was reportedly used by terrorists as bases and hideouts for launching attacks.

Meanwhile, Human Rights Watch, HRW, has described continuous killings of innocent civilians by the terrorist sect, Boko Haram, as a crime against humanity.

It said over 2,053 civilians in an estimated 95 attacks were killed in the first half of this year.  to HRW West Africa Director, Corinne Dufka, the figures are based on detailed analyses of media reports and field investigations.

Dufka said the killings and other abuses were part of widespread attacks on civilians in over 70 towns and villages in the North- East and the Federal Capital, Abuja, among others.

“There has been a dramatic increase during 2014 in the numbers of casualties from bomb blasts, including several apparent suicide bombings.

“Since January, at least 432 people have been reported killed in 14 blasts in crowded marketplaces, a brothel, a technical college, and, on two occasions, places where people were watching soccer matches.

“Three of these attacks were in Maiduguri, the Borno State capital; two in Kano; two in Jos, the Plateau State capital; and three in Abuja, the federal capital. The Abuja attacks may demonstrate a southward trend of Boko Haram operations.

“Boko Haram is effectively waging war on the people of north-eastern Nigeria at a staggering human cost.”

HRW added that “atrocities committed as part of a widespread attack on civilians are crimes against humanity, for which those responsible need to be held to account.”

The rights group said the bulk of the attacks and casualties credibly reported and investigated by the HRW took place in Borno State, the birthplace of Boko Haram, where 1,446 people died.

“Attacks killed 151 in Adamawa and 143 civilians in Yobe State. Human Rights Watch compiled the figures by analysing credible local and international media reports, and the findings of human rights groups as well as interviewing witnesses and victims of numerous attacks.”