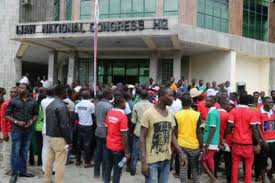 As the Nigerian Government grapples with a horrific Islamist insurgency in the North East, an International conflict prevention group has warned that if the Muhammadu Buhari administration fails to address the “long-simmering grievances” and deprivation in the oil-rich Niger Delta urgently, the area could soon erupt in violence again.

In its latest report issued September 29, the International Crisis Group warned that increasing complaints about chronic poverty and oil pollution as the Presidential Amnesty Programme for ex-militants reaches its twilight, may fuel a renewed rebellion in the region.

The group observed that since the defeat of Goodluck Jonathan, who is a native of the area in March, some activists have resumed their “agitation for greater resource control and self-determination” while some ex-militants have threatened to return to the creeks to continue the armed struggle that characterised the region prior to the amnesty programme.

At its peak in 2009, the insurgency in the Niger Delta cut Nigeria’s oil output by over 50 percent and was costing the government close to four billion naira (nearly $19 million) per day in counter-insurgency operations, according to the International Crisis Group

An amnesty programme put in place by the government in 2009 helped in reducing violence in the region.

The report, however, said the programme failed woefully to address the inherent causes of violence in the region such as poverty, youth unemployment and environmental pollution caused primarily by oil spills.

“The government has largely failed to carry out other recommendations that addressed the insurgency’s root causes, including inadequate infrastructure, environmental pollution, local demands for a bigger share of oil revenues, widespread poverty and youth unemployment,” the report observed.

According to the report, the original arrangement where militants in the amnesty programme were paid through their leaders helped in making fighters dependent on their leaders as well as solidify the bond between them in such a way that makes it easy for the militant leaders to rally their soldiers to cause trouble.

The report stated that because the stipend paid to ex-militants ( N65,000) is way more than the national minimum wage of N18,000 many ex-militants have become indolent and instead of seeking paid employment, rely on the stipend.

It, however, said stopping the payment of the allowance may create serious security challenges.

“There is a severe mismatch between the training the former militants receive and the job market. At the end of March 2015, reportedly only 151 of the 15,451 graduates from the training programs had found jobs with credible organisations in the country.

“Many currently being trained have high expectations of positions in oil, gas and aviation companies, but industry sources insist there is presently limited room to absorb many job-seeker. Frustrated graduates may be tempted to return to militancy or violent crime, only now better educated and more likely capable of extracting new concessions from the federal government,” it noted.

The report also pointed out that the cancellation of the pipeline protection contracts of some ex-militant leaders by President Muhammadu Buhari is likely to push some these militant leaders to resume their arms campaign against the government.

It added many militants leaders have become stupendously wealthy and politically influential following years of government patronage during the Goodluck Jonathan administration thereby increasing their capacities to cause mayhem or make higher demands from government.

The organisation slammed former President Jonathan administration for paying “less commitment to the crucial tasks of improving infrastructure, restoring the environment and enhancing livelihoods. In spite of promises and substantial appropriations, little progress has been made”.

The report stated that the Ministry of Niger Delta Affairs, the Niger Delta Development Commission, NDDC and other agencies created to address Niger Delta related issues such as oil spills and environmental degradation have woefully failed to meet the expectations of the people.

The report noted that the NDDC, for instance, has only completed 37 percent (2,328 out of 6,349) of projects launched since 2000. In fact, Mr Jonathan lamented in December 2013 that the NDDC has little on the ground to justify the massive appropriations it gets.

The report observed that corruption is primary cancer plaguing the commission as it may have become a conduit through which funds are “pumped into the pockets of politically connected individuals than a vehicle for the region’s development.”

“Some politicians, especially in the federal legislative committees on Niger Delta development, and also in the Delta states assemblies, are alleged to view and manipulate it as their cash cow.”

Similarly, the report stated that the Ministry of Niger Delta has let little impact in the region.

“Many of its projects are incomplete or long abandoned. Its flagship effort, the 338km east-west highway that initially ran from Warri in Delta state to Oron in Akwa Ibom state and is being extended to Calabar in Cross River state is significantly over budget and still under construction, despite repeated assurances of imminent completion.”

“Public confidence has diminished. In April 2013, Ondo state oil-producing communities demanded it be disbanded. In March 2014, Senator James Manager, chairperson of the Senate Committee on the Niger Delta, observed that it had “failed to commission a single project since its creation.”

It stated that people of the region as lost confidence in the ability of the Ministry in addressing the issues that plague them. It added that the effectiveness of the Ministry was further hampered by cascading budgetary allocations and lack of patronage from donors.

“Performance is hampered in several ways, beginning with dwindling budgets. Of the 456 billion naira (about $2.8 billion) the ministry received over six years, 2009-2014, 349 billion naira ($2.1 billion) went to the east-west highway. Like the NDDC, it has not received all its appropriations.”

Just like the NDDC, deep-seated corruption has also contributed to the ministry’s ineffectiveness, the report noted.

Though the report admitted that there are no indications that these disgruntled militant groups will mobilise against the government, the report recommended a series of measures to prevent the eruption of violence in the region:

It advised Mr Buhari to visit the Niger Delta as soon as possible “to underscore his commitment to the area and lay out a comprehensive plan for its security and development.”

It also suggested that the amnesty programme should be wound down gradually so to ensure registered ex-militants to complete their training.

The Gropu also called for a scrap of the Ministry of Niger Delta and to initiate a holistic reform of the NDDC to “make it a more accountable and efficient agency.”

The report called on the government of Nigeria to take steps to prevent environmental degradation by empowering and making the Hydrocarbon Pollution Restoration Project independent from the petroleum ministry.

It added that government should work closely with the House of Assembly to accelerate the passing of the Petroleum Industry Bill and called on major oil companies such as Shell and Eni to prevent oil spills and create jobs for local youth.