Insurgency: Should Christians defend themselves against terrorism? 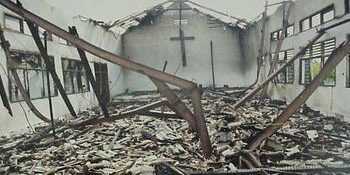 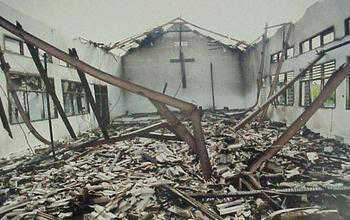 Senior Correspondent goes on a fact finding mission on what Christians should do in the face of insurgency. Should Christians defend themselves or turn the other cheek as recorded in the Bible?

Boko Haram attacks against the Christian community and the nation in general have become difficult for the security agencies to tackle. As a result, hundreds of unarmed Christians have been murdered and continue to be murdered.

President of Christian Association of Nigeria (CAN), Pastor Ayo Oritsejafor, while receiving delegates of the Hausa, Fulani and Kanuri Christians Association of Nigeria recently, said “Boko Haram is a disgrace to Africa as a whole and their activities have affected everybody. My prayer is that very soon, the sponsors of Boko Haram and anyone who supports them would be brought to book so that the law would take its course and they too would face the judgement of not God alone, but also of men”.

However, Christians have continued to die. Only recently, Boko Haram Islamists burnt churches and massacred more than forty people, including students at a Christian seminary in Adamawa State. Also, a pastor, his pregnant wife and children were reportedly murdered in Borno State. Recent statistics from the National Emergency Management Agency (NEMA) revealed that three million people were displaced by insurgency in the North-East between January and March alone.

In a chat with Reverend Father Julius Olaitan of Our Mother Lady of Perpetual Help Catholic Church, Lekki, Ajah, Lagos, he said Christians are not going to fight.

“The Bishops of the Catholic Church have spoken on the matter. We are not going to fight. The battle belongs to the Lord. That is Christianity for you. It is not for us to defend ourselves. It is the Government and the security agencies that must do the right thing by ensuring safety of lives and property as well as freedom of worship for all,’’ he said.

According to the Bible, our Lord Jesus Christ forbade Christians to use violence in any way, even in self-defence . When armed soldiers came to arrest him in order to kill him, he instructed his disciples not to fight or defend him, saying those who live by the sword, shall die by the sword. Jesus said ‘‘do unto others as you want them to do to you. Love your neighbor as yourselves.’’ When Peter cut off the ear of one of the soldiers who came to arrest and kill him, he took the ear and placed it back, healing the soldier. He told his disciples that when they hit them on one cheek, they should turn the other cheek.

Jesus would not fight even in self defence; rather he willingly gave up his life for mankind. He even predicted that Christians will be persecuted, thrown into prisons, killed or hunted down by those who think they are doing the right thing. He said: “Do not be afraid of those who can kill the body but cannot kill the soul; rather fear one who can kill both the body and the soul in hell”. He advised his followers to resist evil with good.

Consequently, many Christians in the early churches were killed, many were beheaded, and thrown to the lions, burnt at the stakes or stoned to death for merely professing to be Christians or owning Bibles. However, the Christian faith has continued to spread despite these persecutions, becoming the greatest religion known to mankind.

However, is Jesus Christ’s approach still practical today? Should Christians continue to turn the other cheek? Shouldn’t Christians organize armed defense for the church so that when terrorists stage an attack on them, they will be able to resist by force of arms.

He called on the Pentecostal Fellowship of Nigeria (PFN) and the Christians Association of Nigeria (CAN) to immediately call a stakeholders forum of Christian leaders where these issues can be discussed.

Speaking further, Pastor Itua said “such forum should give us the opportunity to seek the face of the Lord concerning this matter. There is always a solution from God if we seek him. If God fights in the matter, we will all hold our peace. The weapons of our warfare are not carnal; so we need to invite God into the situation,’’ the cleric said.

In another chat with Pastor Favour of the Living Faith Church, Badore, he said Christians should defend themselves. When asked whether this is Biblical, he said: “Why did God command Israel to go to war? If God can command the people of Israel to go to war against their enemies, then Christians can and should defend themselves in any way they can. If war is recognized in the scriptures, then Christians do not need to fold their hands against insurgents who come to kill, steal and destroy them. We will not go on the offensive but if people come to attack us, we have every right to defend ourselves. When Jesus asked us to turn the other cheek when we are hit on one, he was talking about forgiveness. It does not mean that we should turn the other cheek so that the fellow can slap us the second time. It’s like asking whether a Christian can own a gun. A Christian can own a gun. He will not attack you first. If you come to my house to do me bodily harm and I have a gun, I will kill you first.’’

Pastor Tolu Fowotade of Mountain of Fire and Miracles Ministry, in his own response said ‘‘that he would rather advise Christians to flee. According to him, wherever such insurgents are spreading violence, Christians should not be there.

“They should flee such places because the weapons of our warfare are not carnal but spiritual towards the pulling down of strongholds. Christians cannot be taking up arms. Christianity is a religion of love and not of war,’’ he added.

Deacon Chinedu Chima of Global Church of the Living God said Christians should pray. According to him, prayers works wonders.

His words: “Love is the basis of Christianity. Jesus displayed love in his life and he is our emblem. If Jesus did not fight his enemies with violence, how then can we fight them with violence?

Speaking further, he said if God fights for you, the fight can be terrible. “He does not fight with weapons that we can see. Christianity is about peace and love and Jesus laid a great foundation. He never fought his battles with physical weapons and he won. In the history of Christianity, more Christians have laid down their lives rather than take up arms against their enemies,” he stated.

Taiwo Ajoke of the Redeemed Christian Church, RCCG, opined that Christians must learn to defend themselves.

According to her, what is happening in the North cannot happen in the developed world because nearly everyone has a gun in his house.

“Take the United States for example. They have the State Police, Community Police, Federal Police and everyone has a gun in his home, and so if the government fails to defend you, you can defend yourself. The Bible says prayer without works is dead. We must back up our prayers with actions. The Christian Association of Nigeria and other stakeholders should immediately set up a Christian vigilante group that will liase with the government in order to defend Christian communities, and churches that are being attacked by Islamic insurgents in the North. We cannot leave our destiny in the hands of government alone. We must take our safety in our hands, with prayers and with action,’’ she said.