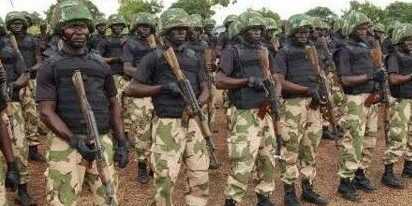 Authorities of the Nigerian Army, yesterday, raised alarm over the negative impact of inadequate funding for military operations currently going on in the North-East and other parts of the country, noting that the development needed to be addressed urgently.
Chief of Accounts and Budget of the Nigerian Army, Major-General Abdullah Muraina disclosed this in Jos, yesterday, even as the Chief of Army Staff, Lt General Kenneth Minimah who spoke in a similar tone said that ethno-religious crisis and terrorism has left serious financial demand on the Nigeria Army.

The two generals made their remarks during the opening ceremony of the Nigeria Army Finance Corps Warrant Officers/Senior Non-Commissioned Officers Training Week, 2014 holding at the Headquarters of the Infantry Course Centre, Jaji, Kaduna State.

Muraina said: “Apart from the limitations of the envelope system, the Nigeria Army is enmeshed in the bureaucratic bottleneck for funding approvals for military operations.

“Currently, budgetary allocation for the military is inadequate to meet the contemporary security challenges and also cater for the welfare of the Nigerian Army. This calls for a review as the increasing speed at which the effects of conflict appear in the operational environment will continue to challenge military commanders”.

Consequently Muraina said: “It is our humble appeal that government could evolve other means of funding and supporting military operations other than the normal budgetary allocation.

“Such means include but is not limited to strategic co-operation and liaison with other civil industries for the production of uniforms and other equipment”.

He suggested that, “a special operations fund could be included in the defence budget and placed under the control of the Chief of Army Staff for immediate disbursement to the required operation areas”, adding that “our focus is to provide financial management support to the Nigerian Army across the full spectrum of operations during this period of security challenges”.

Explaining the magnitude of the problem, the CAB said: “This year, N4.8billion was allocated for capital projects for the Nigerian Army. Of this amount, because of the security challenges, the army decided to buy ballistic helmets and fragmented jackets (2 items) for 20, 000 soldiers, at a cost of $1500, it will amount to about N3billion. Meanwhile, about nine items are needed for the soldiers”.

The COAS, on his part said: “No doubt, you are aware of the increasing wave of socio-political and ethno-religious crisis threatening the nation’s security lately. This has assumed a higher dimension, witnessing spate of bombings and attacks on vulnerable points and other strategic areas of interest to the country. This has left serious demands on the Nigeria Army resources.

“We also know that funding is fundamental to containing security challenges. Success in this pursuit, therefore calls for prudent and efficient management and application of funds. I envision an Army that will effectively manage its available resources to be able to meet contemporary challenges”, he said. About 150 non-commissioned officers are attending the course, expected to end next Friday.

Meanwhile, Minister of Information, Labaran Maku, yesterday, lambasted governors of the 19 northern states, saying that the insurgency in the zone has continued to fester because “they are not doing enough to win the war against terror.”

Briefing State House correspondents after the Federal Executive Council meeting which he said discussed extensively, the recent bombings in Kano and Jos, Mr Maku said rather than preoccupy themselves with criticizing Federal Government, the governors of the northern states must mobilise their people to join the fight against terror.

“It is not the weaknesses of the armed forces, it is the same way the Americans are getting frustrated in Afghanistan.

“Every governor of the 19 northern states must monitor people at the grass root or local level. Until we have every state government determined to organize its people in terms of information gathering, we may not be able to defeat terror,” he warned.

According to the minister, the required result from the declaration of the state of emergency in some states in the North-east has not been achieved because of lack of adequate cooperation with security agencies.

“We have not seen this preparation going on, if we did this, Chibok would not have occurred. If we are organizing our people, I believe we would have defeated terror by now. You need the co-operation of every little unit to expose these people who are terrorizing the people.

“The entire north must prepare its traditional rulers, each village head, each religious leader and the people to create the necessary synergy and mobilize the people against Boko Haram.

“We need to speak with one voice against terrorism. But the right political mobilization must be put in place and I think that this is what the media should support.

“When people tell you that because we have sent troops we can win the war, it is not true. It is a war with a few ideologically programmed individuals. You need the right networking. We do not have to wait a long time if we do what we are supposed to do and without this cooperation, these people may continue to waste more blood.”

Mr Maku cautioned against undue antagonism of the nation’s security services warning that “If we destroy our armed forces, we do not have alternatives. These are the people being killed daily and they are doing a lot for this country. These are people whose children are being turned into orphans. This is a guerilla warfare and we believe that Nigerians can help to win it if we prepare ourselves and organize ourselves to defeat terrorism by mobilizing our people to give information about the terrorists”

He equally cautioned politicians against unnecessary grandstanding saying that “the objective of terror group is to divide the opinion of Nigerians, put fears into the people and get them disunited and we need to understand that politics aside, we must unite to fight this terror.”