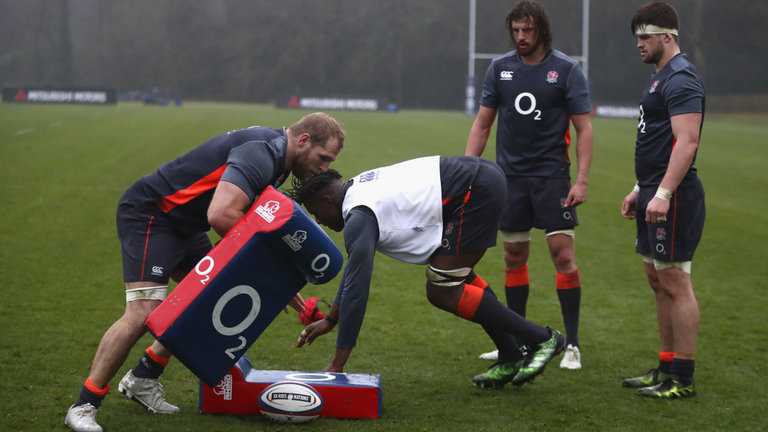 James Haskell is confident England have the strength in depth to overcome their injury concerns and mount a successful defence of their Six Nations title.

With Chris Robshaw and Billy Vunipola ruled out of the tournament through injury and Haskell tipped to start on the bench for Saturday’s opening game against France following a toe problem, Eddie Jones is set to field a new-look back-row combination.

Jones is expected to name Saracens star Maro Itoje at blindside flanker, with Northampton’s Tom Wood and Wasps’ Nathan Hughes joining him in the back row.

Second row George Kruis is also a question mark after experiencing a setback in his recovery from a broken cheekbone but Haskell insists Jones’ squad can cope.

“The beauty of the players we have got in this squad and the way we train is everyone can fit in seamlessly to each position,” Haskell told Sky Sports.

“Robshaw and Billy are huge losses. They are both outstanding players who have done amazing things for England and they will be missed.

“But the guys coming in are of equal pedigree. I think the back row are interchangeable. You get a few grey-haired stalwarts of the game who believe a seven should look like a seven and a six should be a six and they will debate that over their pints of beer until the long hours of the morning.

“But for us it is about picking the best players in the position that fit into the role that Eddie and the coaching staff have. That is a very interchangeable thing and whoever gets the chance to start in that back row will do a great job and will be fine.”

Itoje is set to make his first start in the back row for England after excelling at lock and Haskell believes the 22-year-old will offer a different dynamic from the injured Robshaw at No 6.

“He is a very good player Maro,” Haskell said. “He is a guy that is on a development journey like a lot of us. If the coaches deem he is the best man for the job he will just add to the side.

“Having different players like him involved gives you different line-out options and different ball-carrying options. I think he will fit in seamlessly.

“He just has to make sure he doesn’t try to go to too many rucks and gets his hands on the ball.”

Since returning from seven months out due to toe surgery, Haskell has played less than an hour of rugby and has been struggling with residual soreness from the injury.

However, he has been deemed fit enough to be included in England’s 25-man squad for the France game and he is confident he can make impact if called upon.

Haskell said: “I feel that that I am [ready]. The way the modern game is at the moment and the way we train – especially with England – has such an intensity that it is almost above match speed.

“We have so much physicality here. We do so much tackle technique work that I feel ready to play. I got that hit out against Zebre for Wasps. That was 60 minutes. I got a lot of contact work in that game.

“So I feel happy and ready to play.”