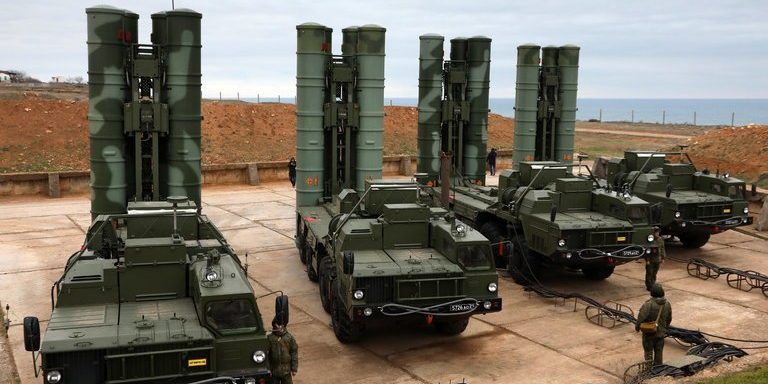 NEW DELHI — India’s defense minister is visiting Moscow this week to finalize the purchase of a Russian missile defense system, Indian officials say, in a weapons deal that would violate American sanctions against Russia.

The potential $6 billion deal comes at a time when the Trump administration is both weighing more extensive sanctions against Russia and trying to forge a military alliance with India. Indian officials say the agreement could be finalized as soon as this week, with India purchasing five S-400 Triumf systems, an antiaircraft missile array that can also intercept missiles.

If the purchase goes through, the Trump administration would have to choose between punishing India for violating the sanctions or granting an exemption to avoid souring the relationship.

The United States has been trying to cultivate India as a strategic ally and a hedge against Chinese military expansion. Washington has typically dangled defense deals as a way to improve military ties with countries, and it has courted India aggressively. Lockheed Martin offered last summer to move the production of F-16 fighter jets from Texas to India if India agreed to buy the plane.

“In the past few years you’ve seen a massive transition where more equipment is being bought from the U.S. That’s because the U.S. wants a closer relationship with India, and defense deals are essentially diplomatic deals,” said Shailesh Kumar, the Asia director of the Eurasia Group, a geopolitical risk consulting firm.

“My suspicion is that America will not deem the S-400 purchase as sanctions-worthy,” Mr. Kumar said. “There’s too much at stake for bilateral relations. If the U.S. goes for sanctions, it will undermine the good will the U.S. has been trying to build up with India over the last two decades.”

Washington is increasing pressure on Moscow over its meddling in American elections and over the poisoning of a Russian spy in London last month. American officials told Reuters that additional sanctions on Russia could be announced as early as Thursday, expanding on a previous round that passed with overwhelming bipartisan support in Congress in August.

“We are engaging with a range of countries to avert future defense acquisitions, and the secretary of state will take appropriate action when and if we determine sanctionable activity has occurred,” a spokeswoman from the State Department said in an emailed response to questions. The spokeswoman did not specify what action Washington would take if the deal went through.

India’s purchase of the S-400 had been stalled over the past year by pricing concerns, and an official at the Ministry of Defense said Thursday that negotiations in Moscow were ongoing.

The potential purchase of the Russian missile system, also referred to by NATO as the SA-21 Growler, demonstrates India’s continued reliance on Russian military hardware at a time when the United States is trying to increase its arms sales to the country.

Washington’s military sales to India went from nearly zero a decade and a half ago to some $15 billion today. Over the past five years, the United States has edged up to become India’s second largest arms supplier, just behind Russia. Russia accounted for 62 percent of arms sales to India over the past five years, down from 79 percent from 2008 to 2012, according to the Stockholm International Peace Institute, which tracks military spending.

American officials acknowledge that India’s large stock of Russian equipment is a fact of life. But the pending S-400 deal is alarming to the Americans because it is a relatively new and state-of-the-art weapons system, not just an agreement to service existing equipment.

“The Russians are angry at India for going to the Americans for a lot of equipment, because India was their backyard as far as military purchases went,” said Rahul Bedi of Jane’s Information Group, which tracks defense sales and is based in London. “The Indians are scrambling to curry favor again with Russians and the S-400s are a way to do it.”

India will be hosting a defense exhibition next week, inviting global weapons manufacturers to showcase their hardware. The United States and Russia are both sending official delegations.

India’s pending deal is also another potential setback to the United States’ struggling Patriot missile defense system, produced by Raytheon. Turkey, despite being a NATO ally, signed an agreement to buy the Russian S-400 system in December, ignoring American concerns.

American officials have also tried to sway India to purchase Patriot missile systems instead of the S-400. But the Patriot system has faced recent scrutiny after it failed to protect Saudi Arabia’s capital from missiles fired by Houthi militants in Yemen.

“India wasn’t very impressed with the Patriot compared with the S-400, which wins hands-down in capability, in its availability, service availability. It’s a more efficient system,” said Mr. Bedi of Jane’s.

But, he added, “India requires so much, there’s enough food on the table for everyone to eat and have a go at it.”