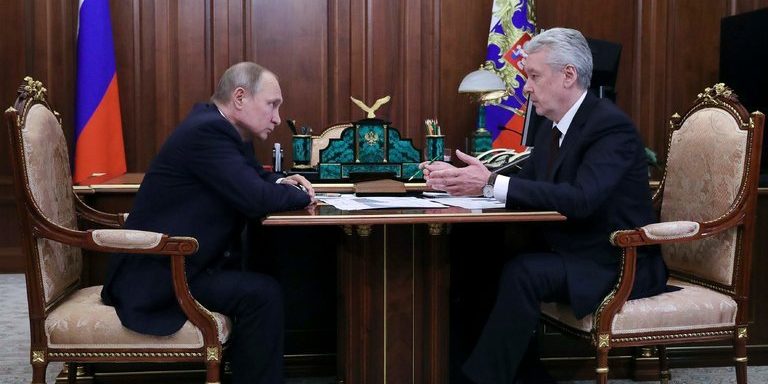 MOSCOW — Moscow met the limited American-led airstrikes against Syria before dawn on Saturday with plenty of bluster and heated rhetoric, starting with an uncharacteristically quick response from President Vladimir V. Putin condemning the attack and accusing the United States of aggravating the humanitarian situation.

But there was also a palpable sense of relief.

The sun was barely up before the Defense Ministry, not famous for speedy reactions, pumped out a statement underscoring that none of the thousands of Russian troops garrisoned in Syria had been threatened by the American, British and French attack and that none of its air defense systems had been mobilized.

“It looks like both sides were playing according to their prescribed roles and managed to limit the harm from this kind of confrontation,” said Aleksandr M. Golts, an independent Russian military analyst and deputy editor of Yezhenedelny Zhurnal, an online current affairs magazine. “Syria will not be the starting point for some kind of global confrontation.”

The American ambassador to Russia, Jon M. Huntsman Jr., released a statement on Facebook on Saturday confirming that the two sides had taken steps before the assault to made sure they stayed out of each other’s way. “Before we took action,” he said, “the U.S. communicated with the R.F. to reduce the danger of any Russian or civilian casualties.”

Of course, the latest attack binds Russia more closely than ever to President Bashar al-Assad of Syria. The fact that there was no immediate Russian reaction to President Trump’s scathing remarks about that alliance suggested that the Kremlin has accepted the costs involved.

Mr. Assad has become something of a “human shield” limiting Russia’s options, noted Vladimir Frolov, an independent foreign affairs analyst and columnist for Republic.ru, “but it was a choice that Moscow made.”

President Putin often waits for days before weighing in on an international crisis, so his issuing a statement within hours of the attack indicated that the Kremlin considered it a critical situation.

Mr. Putin called for an emergency meeting of the United Nations Security Council to discuss the attack. Other than that, however, he limited himself to repeating Russian claims that no chemical attack had taken place to warrant the onslaught, and that Washington was only worsening a dire humanitarian crisis.

“Russia condemns in the strongest possible terms the attack against Syria, where Russian military personnel are assisting the legitimate government in its counterterrorism efforts,” Mr. Putin said in the statement. “Through its actions, the U.S. makes the already catastrophic humanitarian situation in Syria even worse and brings suffering to civilians.”

Like Mr. Assad, Russia condemns all opponents of the Syrian government as “terrorists.”

The calmer tone was a noticeable change from preceding weeks, when many commentators suggested that the United States and Russia were slouching toward a replay of the 1962 Cuban missile crisis, which brought the two Cold War adversaries to the brink of a nuclear confrontation.

Some Russian news outlets, while trying to make light of the panic mode, also provided practical advice, like which Moscow metro stations were the most secure against nuclear attack and how much water people should take with them to a bomb shelter.

In the weeks before the attack, Moscow issued repeated warnings, particularly from Gen. Valery V. Gerasimov, the chief of staff for the armed forces, that the Kremlin would “take retaliatory measures.” The general hinged his warning on the important caveat that Russia would attack missiles and the platforms from which they were launched only in the event that Russian military personnel were placed in danger.

The attack was barely over before the Defense Ministry rushed out its statement stressing that its two main installations in Syria — the air base at Hmeimim and the naval base at Tartus — had not been threatened.

Lt. Gen. Sergei F. Rudskoi, the head of the military’s operations department, said at a briefing that no cruise missiles fired during the attack entered the Russian air-defense zones and repeated the Russian assertion that the attack had nothing to do with chemical weapons.

“We believe that this strike is not a response to an alleged chemical attack, but a reaction to the successes of the Syrian armed forces in the struggle to liberate their territory from international terrorism,” he said.

If anything, the Kremlin may have been somewhat pleased, albeit secretly, that the United States had hit targets well away from the primary areas of Russian control, one analyst suggested.

“Russia has its own zone of interests in Syria, which is on the shore of the Mediterranean,” said Aleksei V. Makarkin, of the Center for Political Technologies.

“The U.S. hit targets that are outside of this zone,” he said. “Of course Russia is upset, but this is just an element of the new Cold War, only one element among several, including sanctions, which are a much more serious problem for Russia.”

In one telling sign of the lack of urgency regarding Syria, the Federation Council, the upper house of the Russian Parliament, put out a statement saying it would discuss the airstrikes “next week.”

At home, of course, the bluster will continue. “For the domestic audience, everything will be covered by tough statements,” said Mr. Golts, the military analyst, noting that few in Russia will complain that the Kremlin did not follow through on its threats to attack the United States military assets in the region.

While the Russian military has undergone an overhaul in recent years and has developed some high-tech cruise missiles and other weapons, a direct confrontation with the United States forces in Syria risked a humiliating walloping, he noted.

The secretive Russian mercenary forces in Syria already lost “a couple of hundred” fighters in a skirmish with American-backed Kurdish forces in February, the C.I.A. director and secretary of state nominee, Mike Pompeo, said in Senate testimony last week. Russia had no desire for a similar confrontation involving its regular forces.

Mr. Putin has twin goals in Syria. First, he is staunchly opposed to regime change fostered by outsiders of the kind that brought chaos to Iraq and Libya.

Second, he sees Syria as leverage to restore Moscow not only to its role as a power broker in the Middle East, but to the status of world policeman that it shared with the United States in Soviet days. The fact that Mr. Trump has started to criticize him and Russia more openly for allying with Mr. Assad has yet to dent those hopes.

In his speech Friday night, Mr. Trump said Russia and Iran should not want to be associated with a “mass murderer” like Mr. Assad, and — as he did after a more limited attack on Syria for the same reason a year ago — declared that Mr. Putin and Russia had failed to fulfill the promise to eliminate all Syria’s chemical weapons.

“Russia must decide if it will continue down this dark path or if it will join with civilized nations as a force for stability and peace,” Mr. Trump said. “Hopefully, someday we’ll get along with Russia and maybe even Iran, but maybe not.”

Mr. Putin will accept limited strikes against Syria that do not indicate a sustained American effort to help the opposition, said Mr. Frolov, the foreign affairs analyst, and would avoid engaging Mr. Trump on the rest.

“The Kremlin is still hoping for a summit with Trump, so it will largely ignore his comments about Putin,” Mr. Frolov said. “There is still some residual hope that a good personal meeting may turn things around.”

The Russians did crow that Syrian air defense systems had managed to shoot down a dozen or so cruise missiles, using equipment “manufactured more than 30 years ago in the Soviet Union,” according to the Interfax news agency. The United States military did not confirm or deny the assertion.

The Russian Foreign Ministry greeted the missile attack with its habitual sarcasm. Without naming the United States specifically, Maria Zakharova, the spokesman for the ministry, zeroed in on the claims of moral leadership and exceptionalism among the allies who launched the attack.

“You have to be really exceptional to shell Syria’s capital at the moment when the country is getting a chance for a peaceful future,” she wrote on Facebook.

In a news briefing on Saturday, a spokeswoman for the United States Defense Department, Dana W. White, said, “The Russian disinformation campaign has already begun.” She noted, “There has been a 2,000 percent increase in Russian trolls in the last 24 hours.”

Even with the immediate threat of a confrontation out of the way, several Russian analysts noted that the proximity of the two sides in Syria, not to mention the shifting positions of Mr. Trump, left plenty of room for confrontation.

“The danger is that at one point something completely unexpected and spontaneous can happen — for instance a missile can miss its target and hit something sensitive,” said Mr. Makarkin.

A version of this article appears in print on April 15, 2018, on Page A10 of the New York edition with the headline: In Moscow, Bluster and a Sense of Relief After a Limited Attack. Order Reprints| Today's Paper|Subscribe