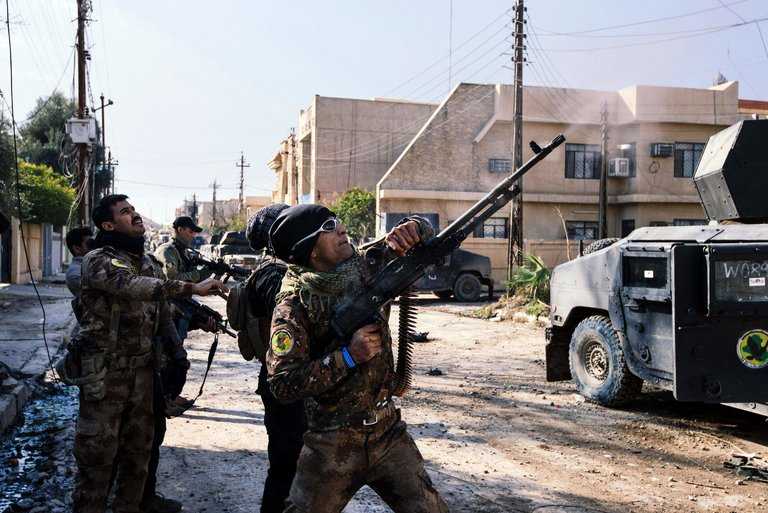 New York Times journalists are in the city of Mosul to report on the battle there against the Islamic State.

MOSUL, Iraq — Any sense of normalcy on Saturday afternoon was shredded, again, when Iraqi soldiers began opening fire, their rifle barrels aimed at a white object in the bright blue sky.

“Tayara musaira!” someone shouted — a drone! Residents of eastern Mosul sprinted home, terrified by the latest attack by the Islamic State, and demoralized by the certainty that more would be coming.

Three weeks after Iraq declared the eastern half of this city liberated from the group, parts of the east bank of the Tigris River remain under siege. Residents say they are repeatedly targeted by Islamic State snipers, mortars and grenade-dropping drones that buzz overhead several times a day.

New York Times journalists are in the city of Mosul to report on the battle there against the Islamic State.

MOSUL, Iraq — Any sense of normalcy on Saturday afternoon was shredded, again, when Iraqi soldiers began opening fire, their rifle barrels aimed at a white object in the bright blue sky.

“Tayara musaira!” someone shouted — a drone! Residents of eastern Mosul sprinted home, terrified by the latest attack by the Islamic State, and demoralized by the certainty that more would be coming.

Three weeks after Iraq declared the eastern half of this city liberated from the group, parts of the east bank of the Tigris River remain under siege. Residents say they are repeatedly targeted by Islamic State snipers, mortars and grenade-dropping drones that buzz overhead several times a day.

And those are not the only troubles here. Even as American-backed Iraqi forces prepare an offensive against the Islamic State stronghold in western Mosul, people in Rashidiya are scratching out a primitive existence, deprived of electricity, running water and other essential city services.

Their ordeal stands as a stark reminder that even though major inroads have been made toward ending Islamic State rule in this city, a complete victory for the Iraqi government is still a ways off. Security, services, public support — none of these are sure yet, even in eastern Mosul.

“Everyone’s afraid — there’s fighting day and night. And when the drones come, everyone disappears,” Yassir Hashim, 20, a butcher, said shortly after the hovering drone scattered customers he had hoped would buy beef from a cow he had just butchered.

Rashidiya is menaced on another front, as well. Around the nearby district of Quabba, on the east bank, Islamic State fighters remain entrenched in a stubborn pocket of resistance just outside the city limits. They battle Iraqi security forces dug in at Quabba’s outskirts.

With bridges over the Tigris destroyed by coalition aircraft to cut Islamic State supply lines, the fighters use small boats to ferry men and supplies from western Mosul, residents said.

“There’s fighting in Quabba constantly — it’s the front line,” said Capt. Ibrahim Sabah, an Iraqi Army officer who commands a checkpoint he said was 600 yards from the Tigris and about two miles from Quabba’s edge.

The captain said three of his soldiers had been killed by an Islamic State booby trap in Rashidiya two weeks ago. He and his men now travel in civilian vehicles because the unit’s six Humvees were knocked out of action during the fight for eastern Mosul.

Captain Sabah’s men displayed a crumpled white drone, complete with a grenade, which they said they had shot down this month. A message was scrawled in blue Arabic script on the aircraft: “Thank you for your patience and resistance.”

Residents said several civilians had been killed or wounded by drones, which the United Nations said had also slightly injured some aid workers. The commercial drones have been adapted to arm and release grenades by hovering and shaking, soldiers said.

In other Iraqi cities, residents fled as security forces battled to dislodge the Islamic State, also known as ISIS or ISIL. In Mosul, Iraq’s second-largest city, the United Nations said 550,000 people remained as militants took over in 2014, urged by government leaflets to shelter in place. About 190,000 residents fled, with 46,000 returning recently.

Eastern Mosul was spared the wholesale destruction inflicted on other Iraqi cities, and humanitarian groups did not have to cope with hundreds of thousands of displaced people. Relief groups have praised Iraqi forces for protecting civilians during a 100-day battle that officially ended Jan. 24, when Iraq declared “total liberation” in eastern Mosul.

Of 860 structures destroyed here since August, 90 percent are in eastern Mosul, the United Nations said. But life has returned to a semblance of normalcy in many areas, particularly in districts on this city’s eastern edge.

For those in Rashidiya, though, a frayed sense of promise was shattered on Friday when a suicide bomber struck a popular restaurant that had recently reopened, and a second suicide attack killed a soldier at a checkpoint. The Islamic State claimed responsibility.

The next day, residents emerged from their homes, tentative and wary. On a main highway, the corpses of two militants lay on the pavement, shot dead more than a week ago, soldiers said.

“Everyone’s afraid,” he said. “They say we have been liberated, but no one can feel safe.”

There are reminders everywhere of the militants’ two-and-a-half-year rule. Many residents still use the Islamic State-imposed term “jinod al-dawla,” or “soldiers of the state.” The militants forbade residents to use the term Daesh, an Arabic acronym for the Islamic State that some consider pejorative.

Bold green highway signs put up by militants are still in use, renaming Mosul as part of the caliphate claimed by the group. Islamic State graffiti also remains, with such messages as “house of the caliphate” visible across the city.

In Rashidiya, Iraqi forces discovered an Islamic State weapons factory inside a technical institute along the river. Homemade mortars were stacked in neat rows, some awaiting fuses and others primed for explosion. Many were designed for suicide vehicles, Sgt. Oras Assad said as he rummaged through a box of land mine components.

Capt. Wissam Khalil said some residents assist Islamic State sleeper cells. He pointed to small knots of young men on a narrow street, one of many roads the army had sealed off with wrecked vehicles.

“Some of them, their brothers and fathers, are with Daesh,” Captain Khalil said.

Many Rashidiya residents said they welcomed the army, but blamed provincial and national governments for degenerating living conditions. With water and sewer pipes damaged, residents must buy bottled water or dig private wells. The United Nations said it trucks in 2.3 million liters of drinking water daily.

The electrical grid is defunct in eastern Mosul because the main power plant is in western Mosul, said Zaidan Khalaf of the city power department. Entrepreneurs have set up diesel generators and charge monthly hookup fees. Residents say they get only a few hours of power per day because of limited fuel supplies.

The Nineveh provincial governor, Nawfal Hamadi al-Sultan, has been accused by rivals of bungling and deliberately delaying United Nations repair projects for weeks. In an interview, Khodayda Khalaf, a Nineveh councilman, called the governor incompetent and untrustworthy.

Mr. Sultan denied the accusations, blaming poor coordination by the United Nations and a lack of aid from Baghdad for the delays. “We have raised a number of obstacles and challenges” with officials in the capital, he said.

In Rashidiya, residents are consumed by subsistence concerns. Nimsha Hussein, 54, a widow with eight children, was wary of drones as she hurried home, clutching a white United Nations relief box packed with soap, toothpaste and other items. “Everyone here is suffering, men and women, old and young,” she said.

Kerosene and cooking oil are in short supply. Unemployed residents said they could not afford expensive fruit and vegetables driven in from safer districts.

Mahmoud Yunis, 33, said he had been trying to get his police officer’s job back since being jailed and beaten by militants for his government service. He complained of high food prices as he struggled to dig a well next to his home.

Hamza Hassoun, 54, earns a few dinars a day by selling a paltry assortment of candy and snacks on a rickety bench to pay for food and bottled water. He said about $7 a month goes to a local man for a generator hookup that supplies six hours of power a day.

Mr. Hassoun scanned the sky for drones, then shrugged and said, “No one can say when life in Mosul will ever be normal again.”