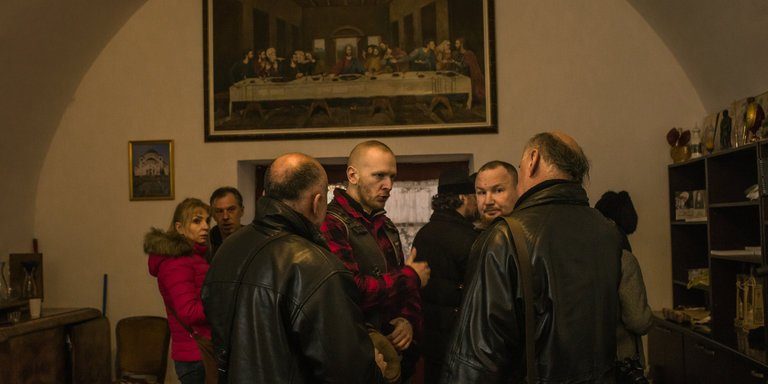 BANJA LUKA, Bosnia and Herzegovina — The Night Wolves, a Russian motorcycle gang known as “Putin’s Angels” and widely feared as agents of meddling and mayhem beyond Russia’s borders, provoked more bemusement and giggles than awe on their latest outing, a nine-day tour of the Balkans designed to show that Russia still had some fervent friends left in Europe.

Instead of roaring into town amid throbbing engines and clouds of smoke, the tattooed, potbellied bikers arrived by car and minivan in Banja Luka, the capital of Republika Srpska, a would-be state born in bloodshed during the Balkan wars of the 1990s.

Anxious about the cold weather, they left their bikes behind in Moscow but did bring along leather vests, an icon of the Virgin Mary and a “press secretary,” a snarling Russian woman whose main job was to keep away the press.

At a time of growing alarm over Russia’s readiness for reckless action abroad following the nerve agent attack on a former spy in England, the bikers’ so-called Russian Balkans Tour set nerves on edge, highlighting how easily Russia can keep everyone off balance by dialing tensions up and down with low-cost foreign forays.

The Night Wolves billed their tour, funded with a $41,000 grant from the Kremlin, as a “pilgrimage” meant to showcase the shared Orthodox faith of Russia and the region, at least the bits of it inhabited by ethnic Serbs like Republika Srpska, which is legally part of Bosnia and Herzegovina.

But they enveloped their activities — mainly visits to churches and drinking sessions with local nationalist hot heads — in such secrecy that they stoked concern over what Russia is up to in Bosnia, a rickety state backed by the West but undermined from within by the Republika Srspka, which covers about half its territory and wants to secede.

“Russia is very good at creating tension and getting attention — it is like a dog running after a car,” said Aleksandar Trifunovic, the editor of Buka, a popular online news site in Banja Luka. The tubby bikers, he added, were “a joke” but had nonetheless sent a message that “Russia stands behind” the Republika Srpska and its leader, Milorad Dodik, whom the United States last year labeled a “significant threat” to Bosnia and placed on a Treasury Department sanctions list.

Sending bikers without bikes, Mr. Trifunovic noted, was much cheaper than sending hard cash, with which Moscow has been extremely sparing.

Mr. Dodik, the Republika Srpska’s president, complained in an interview that, despite his frequent meetings with Russia’s president, Vladimir V. Putin, he was still waiting for Moscow to follow through on what he said was a 2014 promise to provide his government with loans of at least $625 million.

“We have received nothing from Russia,” said Mr. Dodki, a former American protégé who has morphed into a hard-line Serb nationalist. “We had a promise but got nothing. We are a bit disappointed.”

Instead, Mr. Dodik got the Night Wolves, such a motley crew that one local newspaper asked whether it would not have been better for Moscow to send some ballet dancers.

“They looked pathetic; even I am taller than they are,” said Srdjan Puhalo, a bookish, ethnic Serb psychologist who posed with the bikers for photos outside Christ the Savior Cathedral in Banja Luka, perhaps the most enthusiastically pro-Russian city outside Russia.

Mr. Dodik, whose security forces have been stocking up on weapons and recently purchased 2,500 automatic rifles for the police forces, insisted that he did not want violence and wanted the Republika Srpska to secede peacefully from Bosnia and join the European Union. The chances of that happening, however, are near zero, not least because his would-be country claims territory, like the border town of Brcko, that does not belong to it and has a habit of belittling Bosnian Muslims as fanatics.

He described the Night Wolves, a mix of Russians and Serbs, as harmless “tourists” who were far more welcome than “men in short trousers with beards but no mustaches,” a reference to the dress code and shaving habits of Muslims who follow a rigid form of the faith promoted by Saudi Arabia and who many Serb nationalists believe, against all evidence, are numerous in Bosnia.

While claiming not to know much about the Night Wolves, Mr. Dodik in January gave a medal to their leader, Alexander Zaldostanov, a burly bruiser and friend of Mr. Putin’s, to honor what he described as the biker’s contribution to human rights, the rule of law and relations between Republika Srpska and Russia.

That the Night Wolves are not just another group of motorcycle enthusiasts, never mind human rights activists, however, has been evident since March 2014, when its members traveled, this time with their bikes, to Crimea to set up road blocks and provide other support for a Moscow-orchestrated takeover of the Ukrainian peninsula on the Black Sea.

Some of them went on to fight alongside pro-Russian rebels who seized power in eastern Ukraine.

They then reappeared in 2016 in Montenegro, joining events celebrating pan-Slavic solidarity and hostility to the West ahead of what authorities there have since claimed was an unsuccessful, Russian-sponsored coup attempt aimed at blocking the country’s entry to NATO.

Washington takes such a dim view of the Night Wolves that the Treasury Department placed the gang on a sanctions list in December 2014, accusing the bikers of kidnapping, assault and close ties to Russia’s security services. It has since added various affiliates, like a bike shop in Moscow, to the list.

“These guys are not good-will ambassadors — we can all be sure about that,” said Emir Suljagic, a former deputy defense minister in Sarajevo, the Bosnian capital.

The Night Wolves gang, which has local branches around the region, he added, are part of an “extremist ecosystem” nurtured by Russia through its ties to the Serbian Orthodox Church and radical Serb nationalists who still dream of a “Greater Serbia.” It was that idea that led to murderous ethnic cleansing in the early 1990s and also the creation of the Republika Srpska, whose founding president, Radovan Karadzic, was convicted in The Hague of war crimes in 2016.

The Security Ministry in Sarajevo declared the bikers, a security threat and barred Mr. Zoldostanov and the leader of the Night Wolves’ Serbian chapter from its territory. The Bosnian news media covered the progress of the Night Wolves as if they were an invading army, something that Mr. Dodik dismissed as anti-Russian hysteria.

As the bikers started out on their meandering journey from Belgrade, the Serbian capital, to Banja Luka and then back, the United States put down markers of its own by sending the assistant secretary of state for European and Eurasian affairs, Wess Mitchell, on a diplomatic tour of the region.

The parallel tours, one by a button-down American diplomat, the other by a group of unkempt Russian and Serbian bikers, are all part of a long struggle for influence in an unstable region with an unhappy history of inciting wars and an insatiable appetite for great power conspiracy theories.

“Spying is a very popular game in the Balkans,” said Milos Solaja, a professor of international relations at the University of Banja Luka. “People here greatly enjoy intrigue and conspiracies.”

Russia “is not going to start World Word III over the Republika Srpska,” he said, and only “wants to be represented here — there is no big conspiracy.” Bosnia, he added, has been “permanently failing” for more than a decade and did not need any prodding by Russia to become a failed state.

After a night of heavy drinking, the Night Wolves started their Russian Balkan Tour with a visit to Velika Remeta, an Orthodox monastery founded in the 14th century near the Serbian town of Novi Sad.

Their host was the monastery’s abbot, Father Stefan, whose office displays a big map of Serbia showing the country’s borders at the time of the monastery’s founding: They reach down into what are now Greece and Albania. “We had access to three seas then,” the abbot lamented. “Now we have none.”

He denied having any interest in politics and said he was not sure what the bikers were up to. But, with a clock decorated with a portrait of Mr. Putin on his office wall and a Russian flag on his desk, Father Stefan said he was happy to receive anyone who cherished the long spiritual bonds between Russia and Serbia.

He served the bikers — who he acknowledged “did not seem very religious” — homemade red wine and cherry liquor.

Apparently eager to avoid parallels with the Night Wolves’ antics in Crimea, the group’s leader, Mr. Zaldostanov, did not join his comrades on their Balkan tour.

“The purpose of our pilgrimage is to expand the spiritual bond between people and friends in Serbia and the Republic of Srpska,” Yevgeny Strogov, the stand-in leader, told journalists at the border crossing between Serbia and Bosnia.

The trip, he said, was all about “connecting cultures,” adding that Russia and Serbs “have the same culture and the same religion. That means a lot to us.”