Immorality of Nigerian Journalism as the Press celebrate with Gen. Babangida the killer of Dele Giwa and sponsor of Boko Haram 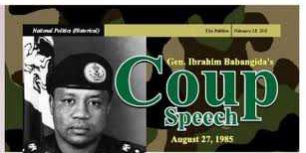 The killer of Dele Giwa Nigeria’s premier investigative Journalist, former military dictator, looter of national treasury and financier of Boko Haram, General Ibrahim Babangida (rtd) who turns 72 today, at a special pre-birthday press briefing in Minna Friday, reflected on the nation’s problems and dismissed pessimism about the 2015 elections, noting that despite the numerous challenges facing the country, “the elections in 2015 will be peaceful”.

On the same day, tributes poured in for the former military president, with President Goodluck Jonathan and Senate President, David Mark, amongst several other Nigerians, eulogising him.

Babangida, who spoke at his Hilltop residence in Minna, Niger State, also expressed optimism that the Nigerian nation will not disintegrate in 2015 as being feared in some quarters.

Said Babangida: “2015 will come and pass like every other year. Nigeria is one of the most amazing countries in the world. If you leave outside it, and hear all the things happening in it, you will think the country is coming to an end only to come and see people happy, laughing and attending matches and so on. That is Nigeria for you. So, people are just crying wolf where there is none.

“Honestly, I think you should forget about disintegration in 2015, I can’t see it happening. It is just out of question. People say all sorts of things to instil fear in people.”

“Anyone who believes in the unity of Nigeria at any level is a leader. We need to follow leaders who have a good understanding of what we want to achieve and look for people who share the same view and work with them. That is how we can bring about a strong leadership.”

The ex-general called on the federal government to ensure the completion of the Nnamdi Azikiwe International Centre, Zungeru, adding that “it is not just a waste of resources to allow the place lie waste but unfair that an edifice named after a nationalist and a former President of the Federal Republic of Nigeria can be allowed to lay waste.”
When asked if he might still contest for the presidency, Babangida reiterated his resolve never to contest for any political position adding that he is only concerned about the stability of the country.

“The question of political ambition is not there. I have told you before in this hall and I stand by it but if you talk about working for the stability of this country, yes; I’m in for that for the rest of my life.”

When asked if there is anything he misses at 72, Babangida said: “As a very strong believer of my faith, I don’t have anything I miss but to be grateful to God for His mercies because He has been kind to me. If there is anything I miss, it is loosing someone very important to me but again my faith makes me know that one day, one of us must give way. I feel old but in very high spirit because God have been faithful and I enjoy robust health.”

Said the President: “I join your family, numerous friends and many well-wishers to thank Almighty God for His continued guidance, protection and provision for you in the past seventy-two years of a life of outstanding accomplishment.”

The President wished Babangida a very happy birthday “and many more years of good health and personal fulfillment.”
In his goodwill message, Mark described the former military ruler “as a quintessential statesman whose leadership qualities remain a reference point in contemporary history of Nigeria.”

According to him, Babangida’s goodwill cut across ethnic and religious boundaries adding that “General Babangida remains a true statesman and a nationalist who believes in one indivisible, united, peaceful and progressive Nigeria.”

Mark also said Babangida has remained steadfast and always making his rich knowledge and wealth of experience available to the new generation of leaders and prayed that “the Almighty God grants Babangida good health, wisdom and courage so that the present and future leaders continue to draw from his fountain of experience and knowledge in the task of moving the nation forward.”