Ikedife Denies Claims on IPOB leader and his support for APC 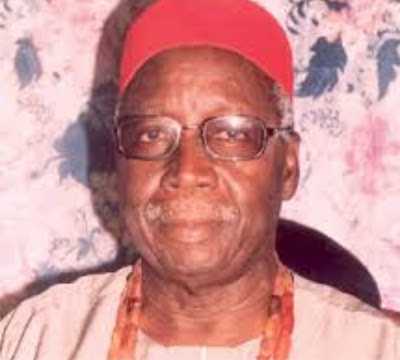 The Indigenous People of Biafra (IPOB) under the leadership of Mr. Nnamdi Kanu, has lambasted for­mer President-General of Ohanaeze Ndigbo, Dr. Dozie Ikedife over his statement that Kanu is not the leader of the Pro-Biafra group IPOB.

Ikedife had said Kanu was only the Director of Radio Biafra and not the leader of IPOB as he claimed, saying that, Supreme Council of the Indigenous People of Biafra (SCIPOB) was founded by some group of persons in London and has also been used by the Bilie Human Right Initiative.

The ex-Ohanaze chieftain went ahead to deny the al­legation that he campaigned for All Progressives Con­gress (APC) in the last elec­tion, adding that Kanu has no power or right to dissolve the SCIPOB, which he said was made of college of leader­ship.

He denied claiming to be the leader of any pro-Biafran groups, be it MASSOB or IPOB.

But the spokespersons of IPOB Dr. Clifford Iroanya and Mr. Emma Mmezu while reacting to the claims of Ikedife, described him as, “a liar who cannot reap where he did not sow”.

“The public is advised to ignore him. Ikedife is a liar for saying he is the co-founder of Radio Biafra. All the records are there at Com­panies House in the United Kingdom to prove that Mazi Nnamdi Kanu from incep­tion has always been the Di­rector of Radio Biafra.

“Only a very stupid and retarded fool will think that IPOB, which today is a glob­al phenomenon emerged out of a leaderless structure. It is equally disheartening that people with a clear agenda for supporting the North in their continued subjugation of Biafrans will have the te­merity to shamelessly come forward to comment on the leadership of a movement they know nothing about”.

“Ikedife should concen­trate on his support for Hau­sa/Fulani hegemony, which he enthroned in Ohaneze when he was the president-general of the now moribund group. Ikedife should first ask who created and ap­pointed him into the position he claims he now occupies. Without our leader Nnamdi Kanu and how he promoted the APC affiliated Bilie Hu­man Rights Initiative, no one will know who they are. This same Ikedife was against Ra­dio Biafra stance to oppose the Islamisation of Biafra through APC,” they alleged.

“It is on record that Kanu visited Dr. Ikedife at his clin­ic in Nnewi with a copy of Eastern Pilot newspaper that caricatured APC and Chris Ngige in Anambra to explain to him why IPOB cannot support APC and Ngige in the gubernatorial election. Ikedife couldn’t hide his an­ger that we were campaign­ing against APC in Anam­bra. Three other people were present at that meeting and can verify this story.

Mr. Arinze Awogu, now a Special Assistant to Gov. Willie Obiano was present at the meeting and he can con­firm it”.

“IPOB is a global giant not because of the treacherous and disgraceful acts of the likes of Ikedife of the now dissolved Council of Elders but is purely due to the lead­ership qualities and fearless­ness of Kanu, the leader of IPOB. Ikedife cannot reap where he did not sow. Has his group Bilie Human Rights ever come out for protest or chastise the murderous state apparatus in Nigeria? Which IPOB meeting has Ikedife ever attended?” they queried.

“He is a member and one of the leaders of Bilie Hu­man Rights Initiative dedi­cated to using the name of Biafra to work for Buhari. Anybody can search online for news stories of Ikedife supporting APC and Bu­hari, this fact is not hidden. The likes of Ikedife are the people that ruined Igboland through Ohaneze and he wants to bring the same de­structive confusion to IPOB but he has failed. Any rea­sonable person will know that he is a hired hand doing the bidding of his masters from the North” the spokes­persons alleged.

The group continued: “The question sensible people must ask is why is it that everybody is now clamouring to be identified with IPOB led by Kanu if not for the phenomenal achievements recorded un­der his leadership without sponsorship from any politi­cian. What has been accom­plished by Kanu in terms of building this movement from bottom up all over the world cannot be replicated by anyone or group in this generation”.

“Why is it that people are not clamouring to join Ikedife’s group if they are doing the right thing for Biafrans. We would want it to be placed on record that Ikedife’s group solicited for support to allow Okorocha to join Biafra agitation at a meeting held at Bannister House in Hackney London through a Bilie solicitor known as Emekaesiri, but this request was flatly turned down by our leader because he knew Okorocha did not mean well for Biafrans”

“Another question Ikedife must answer is who is the leader of IPOB as recog­nised by the United Nations and what name does his group bear? We have raised these issues for people to know that Ikedife and his group cannot deceive us with a non-existent court case at Owerri High Court. It is sad to see an old man display so much jealousy and greed at an age when he should be devoted to the preservation of truth and our value system”.

“What a shame that a man who claims to be an elder has not for once condemned Buhari’s senseless slaughter of his people. Ikedife lacks that credibility and moral au­thority to speak about IPOB and it’s leadership because he is an agent of the North from his NPN days till date”.