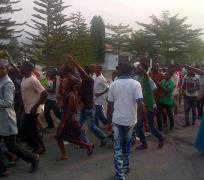 AWKA — HUNDREDS of Igbo youths under the aegis of Association of Igbo Youths Organisation, AIYO, yesterday, stormed Anambra State House of Assembly to protest the directive by the Movement for the Actualization of the Sovereign State of Biafra, MASSOB, that everybody should stay at home on June 8, 2013.

According to the youths, the directive would further cripple the economy of the South Eastern states, adding that Igbos had suffered so much that they did not want MASSOB to continue to make life more difficult for them.
They carried placards, some of which read “No gang up against government,” “Igbo youths want peace,” “Closure of markets is against Igbo interest,” and “MASSOB you are on your own.”
Their leader, Mr. Annie Onyeagba, said many youths were often caught in the web of the frequent MASSOB nefarious activities, especially in Onitsha and would, therefore, not want such a thing to continue.
He urged the state legislators to intervene to ensure that members of MASSOB did not disturb people on June 8, adding that they would be forced to retaliate if anybody was harassed on that day.
He said: “They have no right to force everybody to stay at home. We have a government and one governor, but a member of MASSOB goes about calling himself governor in this state. We cannot allow this to continue.
“It is government that decides on holidays and the action of MASSOB is threatening peaceful coexistence in the country.”
Some of the lawmakers namely, Dr Emeka Aniebonam, Mr. Obinna Emeneka and Mr. Emeka Chukwuemeka, who addressed the youths, commended them for being peaceful and assured them that the House would look into the problem.