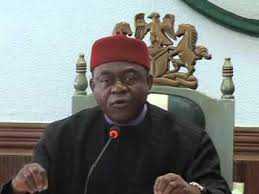 Governor Theodore Orji of Abia State has said the Igbo would never waiver in their support for President Goodluck Jonathan, noting that they were poised to deliver the South East to Peoples Democratic Party, PDP.
According to him, supporting President Jonathan remains the only way the bread of the Igbos will be buttered.

The governor, in a statement by his Special Adviser on Public Communications, Mr. Ben Onyechere, said anybody insinuating the contrary was merely telling lies as “we have learnt our lessons.”
He said: “It is true that it is high time an Igbo man became President of this country,  but from all indications, we are not far from that promised land, and the PDP is the only platform to actualize that dream.
“If you take a census of the PDP governors in the South-East, you will discover that they are working very hard  to assuage the sufferings and needs of the common man without playing to the gallery.
“This fact is verifiable in the public domain. The prioritization of projects and welfare of the people is a common denomination characteristic of PDP governments which is clearly an indication that we are not leaving anything to chance.
“The government of President Jonathan is not only favorable to the igbos but also very generous in funding  projects which run across the North and South, for which he had been widely acknowledged by our brothers in the North.
“One of such instances is the recent commissioning of the Zungeru power station in Niger State.
“We are not unaware of the tricks by opposition to provoke him to a reactionary  status  that may be inimical to the unity of the country.
“We are also gratified by his mien and his deliberate policy of glossing over such gang-ups with the wave of the hand because no amount of gerrymandering can affect the popularity the  President whose actions are stewed in a respectable candor.”