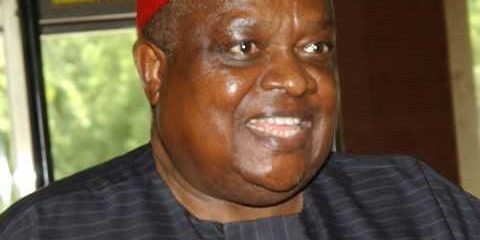 Against the backdrop of renewed agitation for a president of Igbo extraction in 2015, a frontline politician from the Southeast geo-political zone, Chief Emmanuel Iwuanyanwu, has urged Nigerians to give President Goodluck Jonathan a second term.

Iwuanayanwu, a chieftain of the Peoples Democratic Party (PDP), said it is necessary to allow the president to complete eight years as agreed in the PDP’s zoning plan.
Iwuanyanwu spoke yesterday when the Hausa community in the Southeast zone led by Alhaji Adamu Sokoto visited him in Owerri, the Imo State capital.

The Champion publisher described Jonathan as the President from the Eastern Nigeria who should be allowed to rule for eight years.

He said: “This is the first time someone from Eastern Nigeria is President, let him complete eight years and after that, power can shift to wherever and if 2015 is not properly handled, it will be tragic for the country”.

He hinted that the country has so well integrated to the extent that it will be difficult to brea kup. “It is in the interest of every tribe that Nigeria remains the same because if we break up, there will be severe injuries.

He added that the Boko Haram insurgency has nothing to do with Hausa or Fulani but should be seen as Nigeria’s common enemy which must be condemned by all Nigerians.

On the crisis rocking the ruling party, the one-time presidential aspirant said it is not unusual. “It is common with big parties which will make the party stronger, the crisis will soon be over and those who have left will all come back.
“I have confidence in the PDP; I have faith in the country,” he said, adding “if not that we have strong leadership in Jonathan, what happened would have broken Nigeria.”

The Hausa community pledged their continued support for the PDP and the Federal Government, adding that they will continue to work for the success of the party, irrespective of any part of the country they may be.