Igbo leaders meet on common position for confab in Enugu 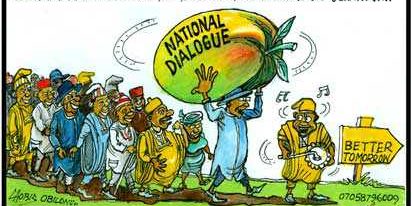 ENUGU—Igbo leaders met in Enugu, yesterday, to articulate common position for the South-East geo-political zone for the proposed National Dialogue.

Others were Chief Mbazulike Amechi, His Majesty Nnaemeka Achebe, Senator Ben Obi and Dr. Aja Wachukwu, among others.

Prof. Nwabueze, who spoke with newsmen after the closed-door meeting, said that the essence of the parley was to articulate a

common position for Ndigbo during the conference.

“We are the Igbo Leaders of Thought, we are here in Enugu to articulate our position, Igbo position that we are going to adopt at the National Conference; we cant reveal our decisions yet; but I’ve told you the purpose of the meeting. We’ve set up the planning committee which will plan the whole thing; its going to be a process that will not end at this one meeting. We also have a fund raising committee, the other committee is the outreach committee that will take our position and go and discuss with other groups, ethnic groups,” he said.

Prof. Nwabueze is the chairman of planning committee, Prof. Mike Echerue is the Deputy, while Elochukwu Amucheazi is the secretary Fund raising is under the chairmanship of the Obi of Onitsha, Igwe Achebe.

On why Ohanaeze Ndigbo, the apex Igbo socio-cultural body did not feature in the meetingn Nwabueze said; ” leave that matter, the body remains the umbrella organisation for the Igbo but there is problem, division in Ohanaeze, part of what we are here to do, we haven’t done it yet, we want to resolve the problem in Ohanaeze.

“I’ve not seen the report of Ohanaeze and cant comment on it,” he said.

On his part, Olisa Agbakoba stated that what the Igbo leaders were doing was part of the on-going meetings by other groups in the country, and urged Nigerians to utilise the historic opportunity to further discuss a way forward for Nigeria.

He also concurred with Nwabueze that the leaders hade no issue with Ohanaeze.

“No disagreement with Ohaneze; the idea of talking about a new Nigeria should be beyond ethnic issues because if you ask those feeling the pinch, you will find that they are neither going to be muslims or catholics or atheists.

What President Goodluck Ebere Jonathan has done is important in the context of understating world history, even though he has been criticised because of the timing, and even though, we prefer Sovereign National Conference, but we have not generated the energy for that. National conferences have ben taking place across the millennia. Whenever an opportunity presents itself for discussion, we must jump at it. What has happened today is a continuation of whats going on across the country.

“Leaders of thought are meeting and articulating the best thing to discuss; people want devolution of power, we don’t want this naira federalism, where states go to Abuja every month to collect money. Our people must work for the money…

“Whether it is Ohaneze, Arewa, or OPC, or Afenifere, we can see that people are suffering. I am from the middle class but you will be shocked that you cant get 150 million Nigerians to produce N2000. We don’t need to ethnicise this, this is a massive issue about how since 1914 when the missionaries came here coupled with the traders, took our land and money, enslaved us and handed us over to the independence fighters who did not conclude the arrangements properly.

“There was a compromise among Zik, Awolowo, Ahmadu Bello. This is the first time, we have another opportunity to have a look at whats going on. We should elevate the issues.”

He said the only major challenge to the conference is possible clash between President Jonathan and the National Assembly, NASS, who had also been working on constitutional review.

“There will be a conflict between President Jonathan and NASS. NASS has already started a dialogue, so they are not comfortable for that. Why is Jonathan doing dialogue when they are the ones saddled with the responsibility, some of them are already saying”.

But he urged Nigerians including the executive and legislature to put the interest of the nation first and allow peoples will to prevail above selfish, clanish or class interest.