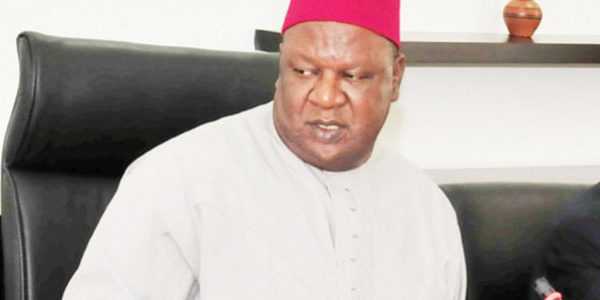 The Professor Nwabueze led Concerned Igbo Leaders of Thought yesterday disagreed on the modalities for the proposed national conference as released on Thursday by the Federal Government through the SGF Anyim Pius Anyim.

While the Igbo leaders of thought faulted the government position saying, that it was in total contrast with recommendations and yearning of Nigerians, the leadership of Ohaneze embraced it as a welcome development.

position document, which delegates from the South-East geo-political zone of the country would take to the conference table.

Speaking to newsmen after their meeting, which was attended by more than 60 Igbo elders and leaders, the secretary of the group, Prof. Elochukwu Amaucheazi reiterated their earlier position that Nigerians want a conference where ethnic nationalities would play dominant role and which outcome would be subjected to referendum to make for a fresh constitution.

But President- General of Ohanaeze Ndigbo, the apex Igbo socio-cultural organisation, Chief Gary Igariwey endorsed the modalities, saying that except for only in one aspect, the position of the Federal Government tallies with the position of Ohanaeze especially on equality of representation on zonal basis.

Said he: “The position of FG is partly in line with what we submitted because we talked about equal representation for all zones. We also said it should be conducted in time. We commend the template. We differ in the area of the outcome going to National Assembly, but to referendum.”

On how Igbo delegates would be selected, Igariwey said that Ohanaeze, as apex Igbo organisation is not in contest with anybody or group, noting that Ohanaeze will call a meeting of all other organisations to decide how to chose delegates.

But rejecting the modalities, the Igbo leaders of thought said that they had severally made their positions known and would go ahead to encourage Ndigbo to participate in the conference with a position paper for the sake of posterity.

“We are concerned about repositioning the country, about re-negotiating the existence of this country among the peoples who were brought together in the first instance by the British buccaneers and the British government. Of course there are negotiations some had to sign their freedom away. So, it presupposes that when you are renegotiating you bring the people concerned.

“So that’s why in the constitution you say, ‘we the peoples of Nigeria’, by peoples you are talking of ethnic nationalities. So we made our points clear to the president as you must have noticed by some reports you have in the papers; many ethnic groups from various zones are in agreement with us.