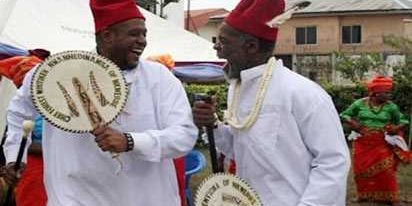 The factionalised apex Igbo socio-cultural organization, Ohanaeze Ndigbo, yesterday, set up a committee to look into the issue of reparation and royalties due to Ndigbo since after the civil war.

The committee, headed by the first republic Minister, Chief Mbazulike Amechi, is one of the 21 committees which the Chief Garry Igariwey-led executive of Ohanaeze has set up to handle various issues affecting the Igbo.

igbo-people
Briefing newsmen after the Ime-Obi meeting of Ohanaeze at its national secretariat in Enugu, President General of the Igbo umbrella organization, Igariwey, said the Reparation Committee was expected to seek redress where necessary from the Federal Government on the resources due to Ndigbo which were denied in the past

“The reparation will be a blanket one to discuss all issues that require discussion on reparation including royalties accruing from delineation of oil wells and the rest. It will be all-inclusive; the details will be given in due course,” he said.

Igariwey said that the Ime-Obi, which is the highest decision making organ of Ohanaeze, also discussed extensively about the bomb blasts in Kano and the killings in other places in Nigeria.

On the deportation of some Igbo from Lagos, the Ohanaeze leader said that the matter was also discussed at the meeting and “we have asked that further comments should be restrained.”

According to him, Ohanaeze would take appropriate measures to address the issue while appealing to people to remain calm in order not to expand the problem on ground.

“Ime-Obi also condemns the abuse of herdsmen on our farms and communities especially in the South East. Before this time, Ime-obi had condemned it but since there has been no change in attitude we re-emphasize the need for Ohanaeze to take appropriate actions to curb the excesses of the herdsmen. We condemn the attitude of allowing free ranging cattle into people’s farms, he said.

Igariwey explained that the meeting, attended by eminent Igbo leaders, also reviewed the National Development Plan which is a 30-year infrastructure development plan by the Federal Government.

“Ime-obi agreed that the time given for appraising the report was too short for proper input and assessment and we therefore agreed that there was need for a study group to look at the draft and to make appropriate suggestions to the Agency/Ministry responsible to ensure that the interest of Ndigbo is well protected while our sons in the legislature, the government and all agencies are put on the alert to follow the process and progress of the developed plan,” he said.

On the forthcoming Igbo Day celebration, Igariwey stated that September 29 is usually earmarked for the Igbo Day but this year’s would be different because we have a summit which will lead into the Igbo Day proper where the Igbo positions on many national issues now and in the future would be made public.