I Was Tempted By Three Presidents To Leave APGA, But I Refused, Says Gov. Obi 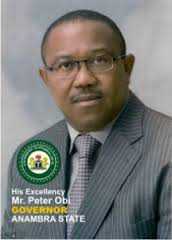 Governor Peter Obi of Anambra State on Saturday said three presidents had at different occasions attempted to lure him to join the ruling Peoples Democratic Party, PDP, but that he declined their overtures.He, however, mentioned only two of them – Olusegun Obasanjo and the late Umaru Yar’Adua.President Goodluck Jonathan is the third president under the current democratic dispensation and in whose government Obi, a retired bank chief executive, is serving as an honorary adviser on financial matters.Obi made this known at a National Executive Council meeting of the All Progressives Grand Alliance, APGA, in Awka, Anambra State capital.He said, “I was tempted by three Presidents to leave APGA. The first was President (Olusegun) Obasanjo. The second was President (Umaru) Yar’Adua, who invited me and the (then) Governor of Imo State, Ikedi Ohakim, but I didn’t join (the party). They told me you (Obi) have the future, you have this…” the governor said.Information Nigeria reports that at the NEC meeting, Gov. Obi’s appointment as the National Leader and Chairman of the Board of Trustees of the party, which was vacated by Chief Chukwuemeka Odumegwu-Ojukwu on his death two years ago, was ratified.The NEC also appointed 30 members of the BOT, including six women. It, however, stepped down the inclusion of former Minister of Health, Dr. Tim Menakaya, as a member of the BOT following objections raised by some members.Meanwhile, February 15, 2014, has been scheduled as APGA’s national convention.
by: daniel