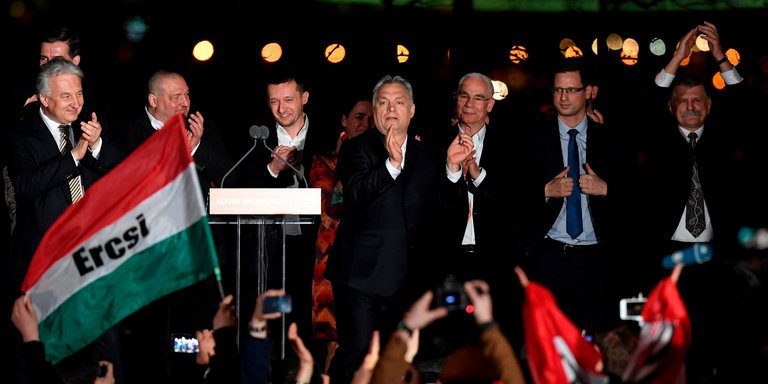 BUDAPEST, Hungary — One day after Viktor Orban and his governing Fidesz party and its allies won a sweeping election victory, independent election monitors said Monday that the party had used the resources of the state on a very large scale to bolster its chances of winning.

“Voters had a wide range of political options but intimidating and xenophobic rhetoric, media bias, and opaque campaign financing constricted the space for genuine political debate,” said Douglas Wake, the head of the Organization for Security and Cooperation in Europe, or O.S.C.E., mission in Hungary.

“The ubiquitous overlap between government information and ruling coalition campaigns, and other abuses of administrative resources blurred the line between state and party,” he said.

The blurring of the line was visible on thousands of bus stops, billboards and telephone booths where the government plastered posters warning of the dangers of immigrants. They were paid for by the government as part of what it said was a public information education campaign.

They were often placed next to campaign-financed posters featuring a photoshopped image of the Hungarian-born American billionaire and frequent Orban target, George Soros, embracing the opposition candidates.

While taking the government to task for the way the campaign was conducted, including not allowing civilian monitors, the O.S.C.E. found no problems with the execution of the election itself, where more than 8.3 million people were registered to vote.

Asked about multiple reports of irregularities in the local news media, Mr. Wake said that his group’s mission was limited to looking at the technical issues that relate to counting votes and tabulating results.

On the national voting list, Fidesz secured more than 49 percent of the vote, with some 2.6 million voting for the party and its Christian Democratic allies. That was roughly the same as the seven largest opposition parties combined.

Fidesz also won convincingly in local elections, securing a two-thirds majority in Parliament, which will give the party a free hand to pursue still deeper legal and constitutional changes that have already given it firm control over courts and other state institutions.

It remains unclear exactly what other measures Mr. Orban might pursue. But Mr. Orban said in a major speech in March that after the election he would seek “moral, political and legal amends” against his critics. And he hinted last week that the government might try to amend the Constitution to stop the European Union from imposing migrant quotas.

A first step may be a “stop Soros” law that would allow the government to impose financial and other penalties on nongovernmental organizations that assist asylum seekers and refugees.

Already, Mr. Orban’s harsh talk about immigrants has been matched by policies to close off the country. Over the last three years Mr. Orban has systematically curtailed the ability of people to seek asylum here.

Where there was once a wall built by the Communist rulers seeking to keep Hungarians from leaving the country, he has erected a steel-and-wire fence to keep people from entering the country. He created two “transit zones” at the Serbian border, barred to the news media, where those seeking asylum must pass.

The country now only allows five asylum seekers to be processed at each location every week, and that is just the start of a cumbersome process meant to make this country as unwelcoming as possible.

The reaction of human rights advocates and nongovernmental organizations, often the target of government attacks, to Mr. Orban’s victory was swift and defiant.

Amnesty International’s Europe director, Gauri van Gulik, said the group was steadfast in its resolve to work to expose abuses.

“We will continue to push back against attempts to stoke hostility toward refugees and migrants and will continue to speak up for groups that support and defend them,” she said. “We will not be cowed by those who attempt to muzzle Hungary’s critical voices and to create an atmosphere of fear.”

There is little doubt that Mr. Orban’s victory presents an even stiffer test for the European Union, which will now have to deal with a vastly empowered Hungarian leader who has already challenged many of the bloc’s core democratic principles.

The European Commission president, Jean-Claude Juncker, will write Mr. Orban to congratulate him on his “clear victory,” said the commission’s spokesman, Margaritis Schinas.

But he added: “The European Union is a union of democracy and values. President Juncker and the Commission feel that defending these principles and defending these values is the common duty of all member states with no exception.”

However, Mr. Orban’s victory was cheered by other world leaders with a similar outlook.

Jaroslaw Kaszynski, the leader of Poland’s governing party, visited Mr. Orban in the closing days of the campaign and made his admiration clear.

Mr. Kaszynski said that the two countries were not against Europe, rather they were “pointing Europe in the right direction.”

In Germany, the parliamentary leader of the far-right AfD Party, Beatrix von Storch, tweeted a picture of herself with Mr. Orban and a simple message: “Congratulations, Viktor Orban! A bad day for the EU, a good one for Europe.”

Geert Wilders, the far-right leader in the Netherlands, congratulated Mr. Orban on Twitter, calling the vote “a well deserved victory!” France’s Marine Le Pen suggested that the Hungarian election could be the start of a nationalist wave across the continent.

“A great and clear victory by Viktor Orban in Hungary: the reversal of values and the mass migration of the E.U. have once again been rebuffed,” Ms. Le Pen tweeted. “Nationalists could gain a majority in the next European Parliament elections in 2019.”

However, it remains to be seen if Mr. Orban’s success can be replicated elsewhere. As the O.S.C.E. report noted, his campaign was conducted in an environment that gave his party clear advantage.

The O.S.C.E issued a milder criticism of his campaign four years ago, saying that the governing party had a built-in advantage because of biased media coverage, restrictive campaign regulations, and the blurring of the line between the political party and the state.

So it was unlikely that the group’s criticism this time would compel the party to make any changes to the way it has used the power of the state for its own purposes.

“A number of the issues are indeed the same,” Mr. Wake said.

“The response to our previous recommendations was extremely limited,” he acknowledged. “It was a missed opportunity.”