How we wiped out family of eight – Suspect 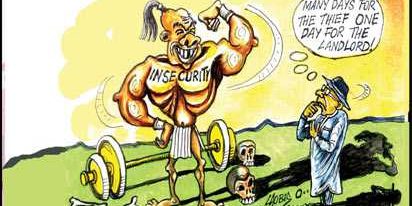 …As victims are laid to rest
FROM ABDULGAFAR ALABELEWE, KADUNASuspects who killed eight family members in Kaduna have confessed to the heinous crime. One of the suspects, Sunday Sun gathered, has opened up, giving an account of how he, with nine others,  carried out the attack that led to the killing of a family of eight.The suspect who is now in the custody of security operatives was  arrested by the youths in the local government and handed over to the  law enforcement agents. It was reported in yesterday’s edition of Saturday Sun that gunmen suspected to be Fulani herdsmen had stormed Manchok  community in Kaura Local Government Area, launched an attack on a family  of eight and killed the entire household.
The suspect who got the beating of his life by the angry youths  before he was handed over to the police told the people how they carried  out the attack on the community after two months of surveillance.
He said: “I am a Fulani man from one of the northern states. The  leader of our group is the son of a Fulani Ardo in Zonkwa, the  headquarters of Zango Kataf Local Government Area in Kaduna State who  left Zonkwa shortly after the 2011 post-election violence.”
He confessed that the gang had maintained its presence in the Manchok  Friday market in the last two months with a view to spying on the  community. “We stormed the village at about 10pm through Zangang from  Riyom Local Government Area of Plateau State. We rested in the desert  until midnight on Friday. We first of all went to the house of Mr.  Nathanial Abins, slaughtered his wife and the five children silently. We  also followed the man who was behind the house and killed him,” the  suspects narrated.
The Police Public Relations Officer (PPRO), Kaduna State Command, DSP Aminu Lawan, told Sunday Sun that investigation was still going on to unravel the circumstances of  the killing. “We are still investigating. We were there with the  governor yesterday and we are still investigating”, he said.
Meanwhile, the victims of the attack have been given mass burial in their family compound amidst tears of sorrow.
During the burial, the Catechist of St. Francis Catholic Church,  Manchok Gaiya wondered how such an attack went unchallenged despite the  high presence of security operatives in the area since 2011.

He, therefore, called on the security agencies in the area to desist  from arresting suspects and releasing them without bringing them to  book, saying that “such action has not helped the communities in  Southern Kaduna who have been under constant attacks by gunmen.”