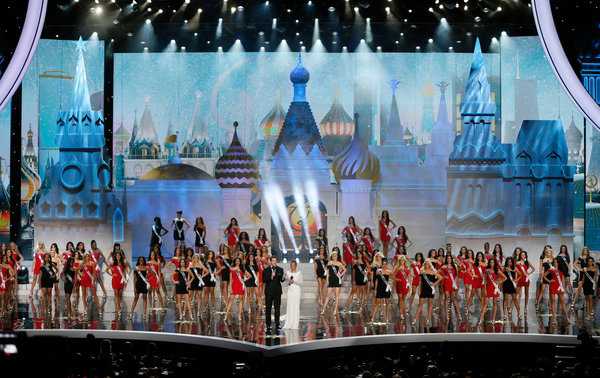 In 2013, beauty queens competing for the title of Miss Universe, the flashy pageant that was then co-owned by Donald Trump, packed up their sequins and sashes and flew to Moscow.

As pageants go, this one was mostly free of drama. Aside from a momentary crown mishap, the event came off without Steve Harvey-like levels of social media scandal.

But nearly four years later, the pageant has become an unexpected focal point in the murky circumstances surrounding the Trump campaign’s possible ties to Russian officials.

How did a beauty pageant become linked to the Trump campaign?

Five months before the 2016 election, three of President Trump’s top advisers — his eldest son, Donald Trump Jr.; his campaign manager, Paul J. Manafort; and Jared Kushner, his son-in-law — agreed to meet with a Kremlin-connected Russian lawyer who promised to provide them with damaging information about Hillary Clinton.

The meeting was first reported over the weekend by The New York Times, and on Sunday, the younger Mr. Trump said he agreed to it at the request of an acquaintance associated with the 2013 Miss Universe Pageant.

That acquaintance was Rob Goldstone, the president of a marketing company who has worked with the Miss Universe organization.

Mr. Goldstone told The Washington Post that he helped arrange the meeting with the lawyer, Natalia Veselnitskaya, on behalf of a client.

That client was Emin Agalarov.

Who is Emin Agalarov?

Mr. Agalarov, 37, is an Azerbaijani pop singer. He is also the scion of a Moscow-based real estate development company.

With his father, Aras, Mr. Agalarov’s Crocus Group paid nearly $20 million to license the Miss Universe name and bring the 2013 pageant to Crocus City Hall in Moscow. Aras Agalarov is a Russian citizen.

In an excerpt from a 2013 joint interview posted on the Crocus Group website, the Agalarovs said that Mr. Trump quickly agreed to have that year’s pageant hosted in Russia. “We all seemed to like each other, shook hands and signed our contract within a week’s time,” Emin Agalarov said then. Licensing the Miss Universe pageant cost an estimated one-third of its budget, he said.

Mr. Trump has had a friendly relationship with the Agalarovs on social media. Days after the 2013 pageant, Mr. Trump tweeted at the elder Mr. Agalarov to marvel about the time he had in Moscow. “TRUMP TOWER-MOSCOW is next,” Mr. Trump wrote.

@AgalarovAras I had a great weekend with you and your family. You have done a FANTASTIC job. TRUMP TOWER-MOSCOW is next. EMIN was WOW!

Mr. Trump has also recorded at least one video message to the younger Mr. Agalarov.

“You’re a winner, you’re a champ, you’re great at real estate,” Mr. Trump said to Emin Agalarov in a video meant to celebrate his 35th birthday in 2014, “and boy can you entertain.”

Emin Agalarov performed at the 2013 pageant. The next year, Mr. Trump appeared in a music video for Mr. Agalarov’s song, “In Another Life.” The video also featured a number of Miss Universe contestants.

In a March interview with Forbes, Emin Agalarov said that Mr. Trump’s election had shelved plans for a Trump Tower in Moscow. But Mr. Agalarov said his family maintained a good relationship with the president.

“Now that he ran and was elected, he does not forget his friends,” Mr. Agalarov said.

Months earlier, he had used those connections to broker the meeting between the Trump campaign and Ms. Veselnitskaya, a Russian lawyer, at Trump Tower in New York.

How did Mr. Trump select Russia as the 2013 location for Miss Universe?

“We look at lots of different things,” Mr. Trump said in an interview to promote the pageant in 2013, “including dollars and money.”

Mr. Trump added that Russia “really” wanted the pageant to serve as an opener of sorts for the 2014 Winter Olympics in Sochi: “This is like the kickoff to the Olympics.”

Beyond having a friendly business relationship with the Agalarovs, Mr. Trump has viewed Russia as a potential partner for the United States on such issues as fighting the Islamic State and combating cyberattacks.

Mr. Trump has expressed admiration for President Vladimir V. Putin of Russia. This also ties back to Miss Universe: In the run-up to the 2013 pageant in Moscow, Mr. Trump tweeted about the possibility of Mr. Putin becoming “my new best friend.”

Do you think Putin will be going to The Miss Universe Pageant in November in Moscow – if so, will he become my new best friend?

What is Mr. Trump’s history with Miss Universe?

Though Mr. Trump sold Miss Universe in 2015, he had long taken pride in the pageant. Mr. Trump credited himself with helping raise its ratings by bringing Miss Universe to NBC.Beauty queens have made frequent visits to Trump Tower to meet Mr. Trump and pose in photos. Days after winning the 2013 pageant, newly crowned Miss Universe Gabriela Isler of Venezuela was invited to Trump Tower.

The pageant’s ties to Russia were not the first time that Miss Universe has been swept up in Trump-related controversy.

In 2015, NBC and Univision backed out of broadcasting the contest after Mr. Trump, as a presidential candidate, made disparaging statements about immigrants. He also drew an onslaught of criticism from the Clinton campaign and others for criticizing the physical appearance of Alicia Machado, the Venezuela-born beauty queen who won the competition in 1996.

Mr. Trump later said he had purchased NBC’s stake in the competition but eventually sold Miss Universe to the talent agency WME-IMG.