How the plot to suspend Sanusi was hatched 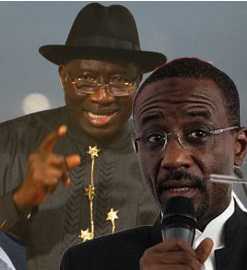 The plot to suspend Central Bank of Nigeria (CBN) Governor Sanusi Lamido Sanusi, was to be carried out last week through the Senate, it was learnt yesterday.

The Presidency opted to suspend Sanusi before the expiration of his tenure to pay him back for the alleged leakage of a letter to the President on the ‘missing’ $20billion oil cash, The Nation was told.

There were indications last night that Sanusi, who flew into Lagos from Niamey, Niger Republic, had interaction with security agents before moving into a private home in Ikoyi.

Investigation by our correspondent revealed that based on a report of the Financial Reporting Council (FRC), the Presidency lobbied some of its loyalists to raise the matter on the floor of the Senate on alleged spending of N250billion without appropriation by the CBN under Sanusi.

It was gathered that a motion to that effect was already set for presentation by the Chairman of the Senate Committee on Rules and Business, Senator Ita Enang.

But, sensing the mood of the Senate and the likely resistance by Northern senators, the anti-Sanusi plotters shelved it.

A source, who spoke in confidence, said: “The Order Paper initially prepared for the Senate was to prevail on senators to look into how the CBN under Sanusi spent N250billion without appropriation.

“They alleged that the report cited the donation of over N100billion to charity on behalf of the CBN without any legal basis.

“Some extracts of the report of the Financial Reporting Council (FRC) were already included in the Order Paper for Senators’ consideration but it was obvious that the agenda against Sanusi could not fly. The anti-Sanusi plotters had to shelve it.

“Their plan was to use the Senate as a springboard to deal with Sanusi. If the Senate’s enlistment had scaled through, the President would have opted for removal of the CBN Governor than suspension.”

It was gathered that the roadblock in the Senate led to a series of consultations of relevant statutes, especially the CBN Act, on whether the President could suspend Sanusi or not.

Another source said: “After seeking legal advice, a decision was arrived at to suspend Sanusi – in line with Section 11(c) of the CBN Act, which gives room for latitude on the part of the President.

“The section says: ‘A person shall not remain a Governor or Deputy Governor or Director of the Bank if … he is guilty of a serious misconduct in relation to his duties under this Act.’

“They knew that the said section is elastic or subject to interpretations. They also realised that Sanusi might go to court to seek redress; the ultimate goal is to get him out of the system first.

“They decided to use the report of the Financial Reporting Council (FRC) to level allegations of misconduct against Sanusi.

“What the plotters designed was what they called a ‘Justice Isa Ayo Salami’s treatment’. The plot is that once Sanusi is temporarily eased out of office, he will be in a weaker position to fight the government.

“The plotters also took notice of the slow pace of the wheel of justice in the country which may not let Sanusi get justice till June when his tenure would have expired. Even if the court hears Sanusi’s application, it would have been overtaken by event.”

Investigation also confirmed that following interventions of some well-meaning Nigerians, including business mogul Aliko Dangote and traditional rulers from the North, President Jonathan had initially accepted to tolerate Sanusi till the completion of his tenure.

But it was learnt that some forces in government made the President to realise that if Sanusi goes away with his “larger-than-life image”, it might set a bad precedent that a public officer could be bigger than the President.

Another source added: “There was so much pressure from forces in government and a few strategists and associates of the President that Sanusi should not go normally.

“The forces alleged that Sanusi did not keep to the terms of a gentleman agreement he reached with the President to keep a low profile till he leaves office.

“A major twist was the olive branch given to Sanusi to either resign or proceed on pre-retirement leave, which he rejected.

“So, the pro-Jonathan forces saw Sanusi as confronting the Presidency and decided that enough was enough.”

The sources spoke also of “security reports which they claimed persistently indicated that Sanusi had a hidden motive against the government even when the CBN governor said he acted in national interest.

Responding to a question, the source added: “At a stage, the Presidency plotted a crisis within the CBN Board but it failed because of Sanusi’s full control of the situation.”

It was revealed that the President made up his mind on Sanusi’s suspension at a session with his kitchen cabinet on Tuesday night.

The source said: “When the President made up his mind with members of the kitchen cabinet on Tuesday, the FRC report, legal advice, and consultations with some prominent people were considered.

“The President reportedly did not warm up to Sanusi when he visited Kano last Saturday. Besides, there were insinuations last night that Jonathan might have consulted the Emir of Kano, Alhaji Ado Bayero, on his plan to suspend Sanusi whom he claimed was taking the government for granted.

“The next stage was the monitoring of the movement of Sanusi. When it was confirmed that he was off to Niger Republic, the Presidency decided to play a ‘fast one’ on him, with all security agencies put on the alert that he should not be allowed back to his office.”

It was learnt that upon hearing of his suspension in the thick of a meeting of CBN Governors in West Africa, Sanusi, who was unruffled, decided to return to Nigeria.

“I think following intelligence report, he offered to fly to Lagos instead of Abuja for strategic reasons.”

It was gathered that Sanusi’s passport was seized, but this could not be confirmed last night.